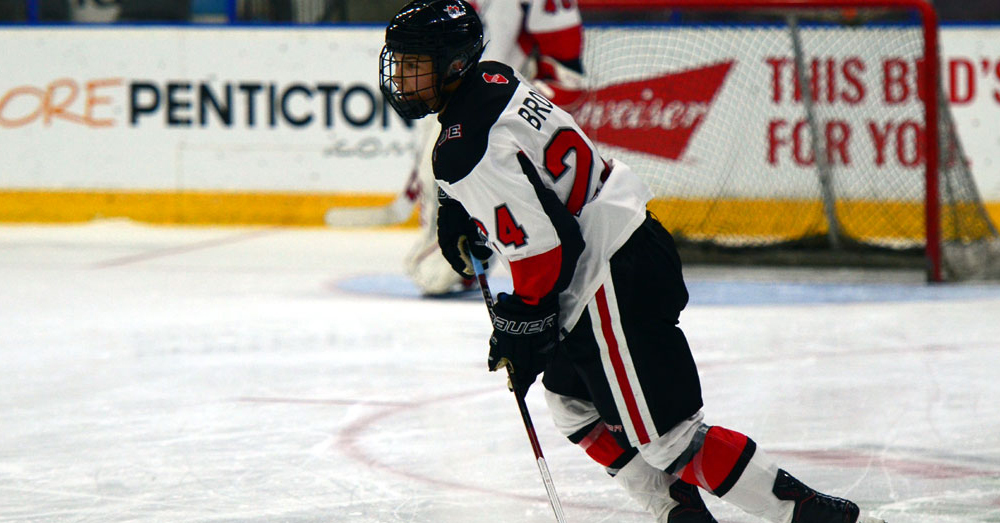 The Pursuit of Excellence Hockey Academy generated some of the best young talent available at the 2017 WHL Bantam Draft, and the beneficiaries are just as excited as the players. The Vancouver Giants selected Kelowna-native Tanner Brown with the 24th overall selection in the draft.

Brown, who played at POE, is excited to be drafted into the WHL and sign a contract committing to the Giants. “It’s a big step for my career in the right direction and I think the Giants are going to help me.”

The 5’11” defenceman tallied seven goals and 29 points through 26 games this season. Brown credits the coaches and facilities of his Bantam team for his success and development. “We’re on the ice everyday, which is awesome… I think the program helped me excel this year; skating, shooting, passing, they’ve taught me a lot. It’s a great program, and I love it here.”

Brown models his game after players like Drew Doughty and Erik Karlsson. “I’m an offensive defenceman who likes to play physical, lots of body, and use my stick very well.” He describes his biggest strengths as his skating, passing, and his shot.

Like all young players, Brown knows that he has a few areas he could improve upon. “Moving up from where I am now to Midget next year, I need to make quicker decisions and just work on my overall strength.”

Brown had a quick discussion with Giants GM Glen Hanlon and Head Coach Jason McKee about what they expect from him in the offseason. He will be going to the gym everyday with the intent to add strength and size to his 170lb frame. He’s also still deciding where he’ll spend the 2017-2018 season but expects that the Okanagan Rockets of the BC Major Midget League will likely be his destination.

It has been an exciting few months for Brown, in addition to being drafted, his Bantam team capped off the season in style, winning the CSSHL Bantam Championship over the Delta Hockey Academy. “It was a pretty big accomplishment, it was something we looked forward to since day one, and then we finally got there and we had to seize the moment and play every shift like it was our last.”

Brown played with Giants third round pick Krz Plummer this season, and he describes his teammate as a skilled, big-body forward. “He brings a lot of skill. He’s a heavy hitter, big shot, big body, good leader, good character attributes, works hard, and he brings a lot of positive things to the team.”

The offensive defenceman and his fellow 2017 draftees will be attending their first WHL Spring Camp with the Giants this week and Brown couldn’t be more excited to get started. “I’ll be meeting some new guys, it’s going to be an exciting moment for sure.”