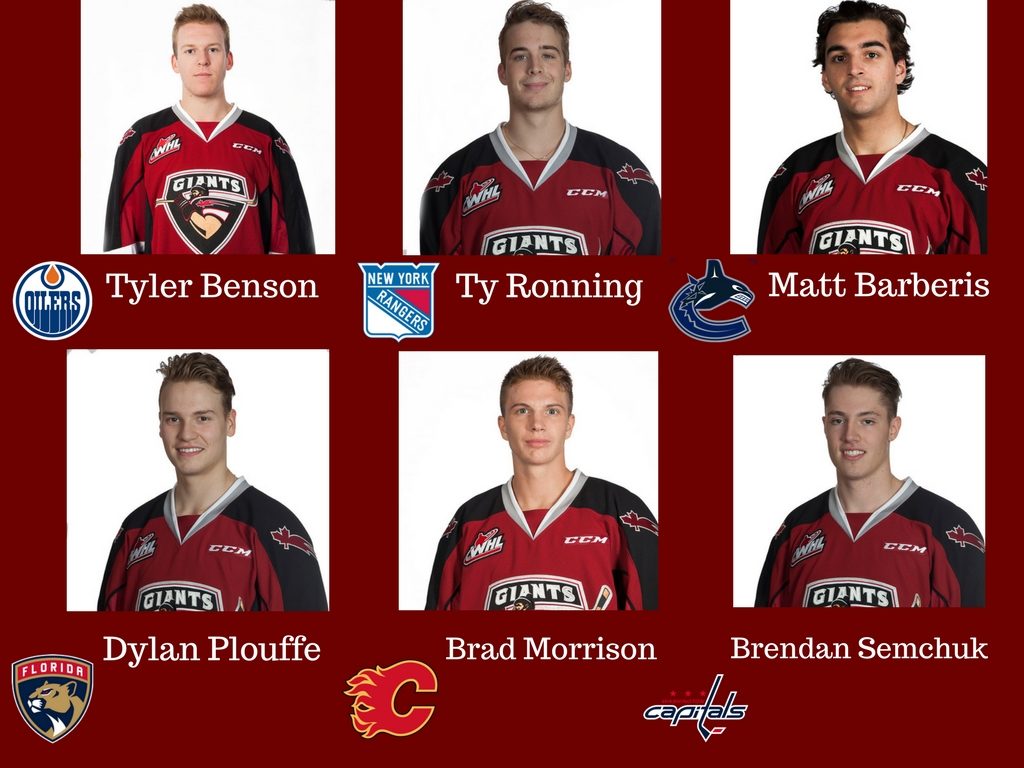 Six members of the Vancouver Giants will be attending NHL Rookie Camps ahead of the 2017-18 WHL Season.

Giants captain Tyler Benson (1998-F) will be attending his second camp with the Edmonton Oilers. Benson, who is originally from Edmonton, AB was selected by the Oilers in the second round (32nd) overall in the 2016 NHL Draft. He signed a three-year entry-level contract with Edmonton in December 2016. In 33 games last season with the G-Men, Benson struck for 11 goals and 31 assists for 42 points. In 132 career WHL games, he has posted 34 goals and 81 assists for 115 points. He was selected first overall by the Giants in the 2013 WHL Bantam Draft. The Oilers begin their rookie camp schedule at the Young Stars Classic in Penticton, B.C. tomorrow at 4:00 PM against Calgary.

1997-born forward Ty Ronning (Burnaby, B.C.) will be attending his second camp with the New York Rangers. At the 2016 NHL Draft, Ronning was drafted by the Rangers in the seventh round (201st Overall). Last season, Ronning led the Giants in scoring with 25 goals and 28 assists for 53 points. He then joined the AHL’s Hartford Wolfpack for 12 games and chipped in two goals and three assists in that span. In 215 career WHL games (all with the Giants) Ronning has potted 66 goals and added 68 assists for 134 points. The Giants selected Ronning 15th Overall in the 2012 WHL Bantam Draft. The Rangers are among the eight teams competing at the 2017 NHL Prospect Tournament taking place in Traverse City, MI. They’ll begin with a 4:00 PM showdown with the Chicago Blackhawks tomorrow.

Fellow 1997-born forward Brad Morrison (Prince George, B.C.) will be attending Calgary Flames Rookie Camp. Acquired by the Giants in a June trade with the Prince George Cougars, Morrison is coming off a season where he scored 21 goals and 31 assists for 52 points in 61 games. In 260 career WHL games (all previously with Prince George) Morrison has registered 85 goals and 103 assists for 188 points. In 2016 he represented Team WHL during the Canada-Russia Series and was selected in the fourth round by the New York Rangers in the 2015 NHL Draft. The Flames are in Penticton for the Young Stars Classic and will face the Oilers tomorrow at 4:00 PM.

1998-born defenceman Matt Barberis (Surrey, B.C.) will be staying in B.C. as he’ll be joining the Vancouver Canucks for their Rookie Camp. In 48 games last season, Barberis scored 10 goals while adding 15 assists for 25 points which was tops among all Giants defencemen. In 103 career WHL games (all with the Giants) Barberis has totalled 17 goals and 35 assists for 52 points. He was drafted 20th overall by the Giants in the 2013 WHL Bantam Draft. Barberis and the Canucks are hosting the Young Stars Classic and will take the ice tomorrow at 7:30 PM against the Winnipeg Jets.

1999-born defenceman Dylan Plouffe (Sherwood Park, AB) will be heading to camp with the Florida Panthers. In 61 games last season, Plouffe scored four goals along with 17 assists for 21 points – A 16-point improvement from his rookie season. Through 121 career WHL games (all with the Giants) Plouffe has registered six goals and 20 assists for 26 points. He was selected in the second round (29th Overall) by the G-Men in the 2014 WHL Bantam Draft.

EDIT: Due to Hurricane Irma, the Florida Panthers have cancelled their rookie camp. READ MORE

1999-born forward Brendan Semchuk (Kamloops, B.C.) will be attending Training Camp with the Washington Capitals. In 63 games last season with the Giants, Semchuk scored eight goals while adding 12 assists for 20 points. The Giants 10th overall selection in the 2014 WHL Bantam Draft has scored nine career goals and 13 assists in 94 career WHL games (all with the Giants).

The Giants return to preseason action this weekend when they clash with the Prince George Cougars at 7:00 PM tomorrow. This game marks the start of a five-game, three-day preseason showcase tournament taking place at the Langley Events Centre. Tickets for all five games are available for $25 all-in.