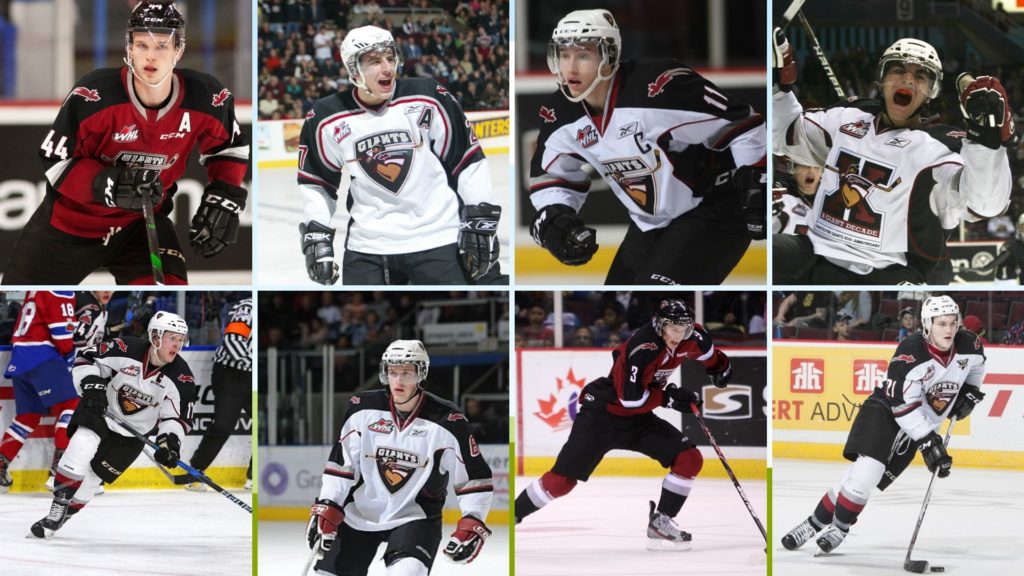 As the NHL approaches the Phase 4 portion of its Return to Play plan, there are eight current/former Vancouver Giants who have joined their respective teams for Training Camp. On July 26th, teams will travel to either Edmonton or Toronto to begin their pursuit of the 2020 Stanley Cup. Here are the eight players with ties to the Vancouver Giants who are hoping to hoist the Stanley Cup in 2020.

After facing more than his fair share of adversity over the years, former Giants captain Tyler Benson made his NHL debut with the Edmonton Oilers in February, 2020. The Edmonton, AB native appeared in seven games with his hometown team this season and managed an assist. A majority of his past two seasons have been spent with the AHL’s Bakersfield Condors, where Benson has thrived. In 115 games he’s managed 24 goals and 78 assists for 102 points. His future remains bright, and a strong showing at Oilers camp could very well lead to a roster spot for him in the 2020 NHL playoffs.

The two-time reigning MVP of the Vancouver Giants is the only player on this list who has “yet” to play an NHL game. That may change as the 2019 fourth overall pick has joined the Colorado Avalanche for their Training Camp. Since joining the Giants full time in 2017-18, Bowen Byram has re-written the team’s history books by becoming the first ever defenceman to lead the WHL playoffs in scoring (2019). He also set a new single season WHL record for most overtime goals in a season (6 – 2019), and in that same season he set a new single season record for goals by a Giants d-man (26). He captured a gold medal at the World Juniors in 2020 and it’s seemingly just a matter of time before he becomes a fixture on the Avalanche blueline. It may happen as early as August, 2020.

Another Avalanche d-man with ties to the Giants is Kevin Connauton. Connauton’s sole season with the Giants was a memorable one as he scored 24 goals and added 42 assists for 72 points in 69 games during the 2009-10 campaign. Following his stint with the Giants, Connauton graduated to the pros where he’s since appeared in 314 career NHL games with Dallas, Columbus, Arizona and most recently, Colorado. Connauton spent most of the 2019-20 season with the AHL’s Colorado Eagles, but did appear in four games with Colorado. His experience will serve him well as he auditions to join an Avs team that has strong Cup aspirations.

Brendan Gallagher is the Vancouver Giants all-time leading scorer, and his success in junior hockey has translated wonderfully to the pros where he has appeared in 547 career regular season games with the Montreal Canadiens who selected him in the 2010 Draft. In four of his first eight NHL seasons, Gallagher has surpassed the 20-goal mark and has recorded 40-or-more points in six of those eight seasons. He’s also added 10 goals and 11 assists for 21 points in 40 playoff games. If the Montreal Canadiens go on a run in 2020 you can bet that Brendan Gallagher will be playing a vital role in their success.

After a strong first season with Montreal, Brett Kulak inked a three-year contract extension with the Habs in May, 2019. The Edmonton, AB native played three full seasons with the Giants from 2011-2014 and for his efforts he was selected by the Calgary Flames in Round 4 of the 2012 draft. Kulak’s NHL career has since spanned 214 games with Calgary and Montreal. Kulak has yet to appear in an NHL playoff game, but has done well to establish himself as a reliable contributor on Montreal’s blueline.

The legendary Vancouver Giant is looking to get his name etched onto the Stanley Cup for the second time. Lucic, a veteran of 958 career NHL regular season games is set to provide invaluable experience and toughness to the Calgary Flames in 2020. Lucic’s first season in Calgary resulted in eight goals and 12 assists for 20 points in 68 games. On top of nearly 1000 regular season NHL games played, Lucic has added 114 playoff games where he’s contributed 28 goals and 42 assists for 70 points. It goes without saying that a healthy Milan Lucic has the potential to be an X-Factor in Calgary’s playoff success.

Jordan Martinook’s two year stint with the Vancouver Giants will be widely remembered for his tremendous statistical bump in season two. As a rookie in 2010-11, Martinook scored 11 goals. A season later he scored 40 and was drafted by Arizona in Round 2 of the 2012 NHL Draft. From there, Martinook began his pro career and has since appeared in 374 NHL games with both Arizona and Carolina. Martinook’s best NHL season came in 2018-19 with Carolina where he potted 15 goals and added 10 assists. He also suited up in 10 playoff games that season. Martinook’s 2019-20 season has been hampered by injuries, but there’s no denying that a healthy Jordan Martinook will benefit the Carolina Hurricanes in their quest for the Cup.

Brennan Menell spent two seasons with the Giants from 2014-2016 before he was traded to Lethbridge in exchange for Darian Skeoch. In 2017, Menell signed a free-agent contract with the Minnesota Wild and since then has spent a majority of the past three seasons with the AHL’s Iowa Wild. Menell did suit up in five games with the NHL club in 2019-20 and will certainly be in the mix for a spot on their blueline ahead of their first-round playoff series against the Vancouver Canucks.