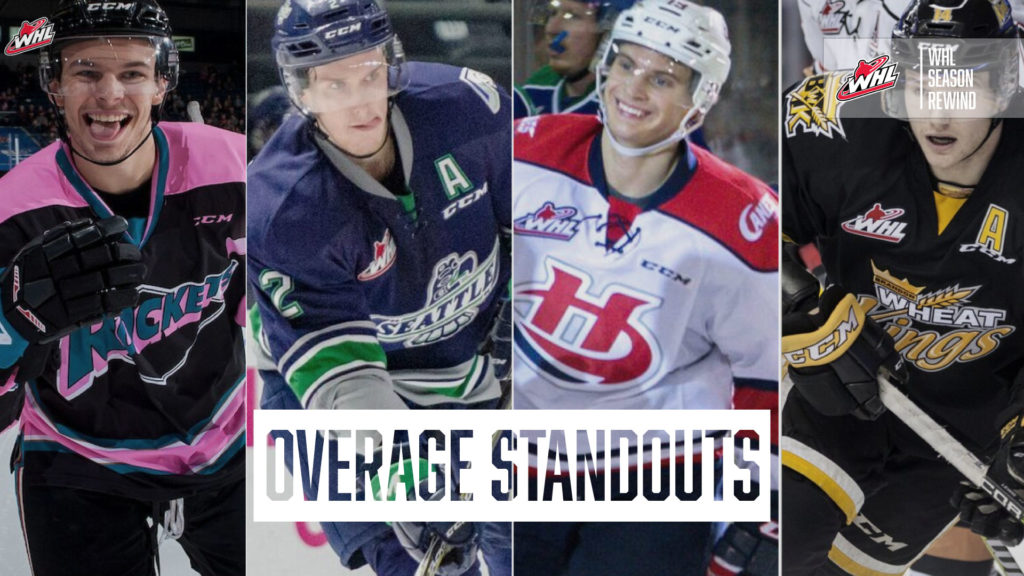 As the Western Hockey League’s 22 member clubs prepare for the 2018-19 WHL Regular Season, there’s renewed hopes of hoisting the Ed Chynoweth Cup at the conclusion of the 2019 WHL Playoffs. Before the season gets underway, it’s time to take a look back at the individual and team performances that made the 2017-18 season one to remember. Today, the WHL is taking a look back at nine overage players whose impressive season’s landed them contracts with various NHL teams. This is the WHL Season Rewind.

Every hockey player plays with the goal of being drafted into the National Hockey League. For some this dream becomes reality, for others it remains a dream. Yet some non-drafted players have found an alternate route to the NHL, and there were several WHL players that proved that not being drafted or signing with the team that drafted them doesn’t write an end to their NHL dream. Instead, they used it as an opportunity to show NHL teams that they have what it takes. This season, nine overage players played their way into contracts throughout the year and will continue to chase their hockey dream.

The first contract of this nature earned came only a month and a half into the season when the Calgary Flames signed Swift Current Broncos captain Glenn Gawdin.  Gawdin had originally been selected in the 2015 NHL Draft, but after not signing a contract, became a free agent. It took just over a month for a NHL team to realize what an elite talent Gawdin is. At the point of his signing, Gawdin had been enjoying a career year with 40 points (14G-26A) in 18 games, producing at a rate of 2.22 points-per-game. He continued that rampant pace, finishing the season with 125 (56G-69A) points in 67 games, with a rate of 1.87 points-per-game. The 6-foot-1 forward has been consistent over his career, posting 313 points (126G-187A) over 312 career WHL games. Gawdin is also a playoff performer, adding 32 playoff points (14G-18A) in 24 appearances, helping his team win the 2018 Ed Chynoweth Cup as WHL Champions. On a personal level, Gawdin was named the 2018 WHL Playoffs Most Valuable Player. From going unsigned to becoming a top prospect, Gawdin is a perfect example of perseverance.

Less than two weeks after the signing of Gawdin, the Los Angeles Kings signed Seattle Thunderbirds defenceman Austin Strand. Strand, unlike Gawdin, was not drafted into the NHL and became a free agent. One of the more experienced defencemen in the league, Strand had an eventful WHL career to his signing date. He was originally chosen by the Red Deer Rebels in the third round, 48th overall, of the 2012 Western Hockey League Bantam Draft. Since then, he played in 223 WHL regular season games, accumulating 84 points (25G-59A) in that span, with 10 power play goals and four game-winning goals to his credit.

A mid-season deal during the 2016-17 campaign sent Strand from the Rebels to the Thunderbirds, where he helped the franchise capture their first WHL Championship in franchise history.

UFA defenseman Austin Strand signs with LA Kings after posting 26 points in 24 games with the Seattle Thunderbirds this season. https://t.co/P5fYbLuy8k

Shifting into December, there was a trio of WHL players earning contracts. The first occurred on December 8, 2017 when Cole Kehler of the Portland Winterhawks joined Strand and signed an entry-level contract with the Kings. In 22 games to begin the 2017-18 WHL season, the big-bodied netminder helped the Winterhawks surge to the forefront of the WHL’s Western Conference. Kehler managed a record of 17-4-0-1 with two shutouts. His 2.20 goals-against-average sat second among all WHL goaltenders, as did his .931 save percentage. His 17 wins were good enough to sit tied atop the leaderboard and his two goose eggs ranked fourth in the WHL. Kehler continued his impressive play, finishing the season with a 2.77 GAA and a .909 SVS%. He backstopped the Winterhawks to a 30-16-1-4 record and had four shutouts. To finish his final year in the WHL, Kehler led the Winterhawks to Round Two of the 2018 WHL Playoffs, where their season came to an end against the eventual Western Conference Champions.

Two players received late Christmas presents in the form of contracts. On December 28, 2017, Saskatoon Blades forward Cameron Hebig signed with the Edmonton Oilers and Moose Jaw Warriors leading scorer Jayden Halbgewachs signed with the San Jose Sharks. Hebig, a 6-foot-0, 182-pound product of Saskatoon, Sask., had played his entire career with the Blades when he signed his contract. The 20-year-old forward played a huge part in the Blades’ success to start the season, recording 51 points (28G-23A) in 34 games. Hebig led the Blades in scoring and sat 11th in the WHL scoring race at the time of his contract.

Hebig also sat fifth in the league for goals with 28, seven behind the league leader. The trade deadline saw Hebig head down Highway 11 to the division rival Regina Pats. The Pats, who hosted the 2018 Mastercard Memorial Cup were loading up with talent to make a deep run. After joining the Pats, Hebig put up 32 points (11G-21A) in 26 games to give him 90 points (41G-49A) in 66 games. He was scoring in waves during the playoffs, hitting the back of the net six times in a seven game first round exit. Hosting the MasterCard Memorial Cup, the Pats had a spot secured and Hebig again hit the twine, scoring four goals in five games. Hebig hopes to join several other WHL Alumni who have already made a name for themselves with the Oilers.

As mentioned, Halbgewachs also received a contract just before the holiday break ended. Halbgewachs followed up a 101-point campaign in the 2016-17 WHL season with another strong performance in 2017-18. Through 36 games, Halbgewachs had 61 points (35G-26A), including 11 power play goals and five game-winners. He sat tied for the league lead in goals with 35 and was tied for fourth in the scoring race, ten points behind the league leader. Halbgewachs used the contract as motivation for a strong second half that saw him finish with 129 points (70G-59A) in 72 games. His 70 goals marked the first time since the 1990’s that a player has tallied that many, and his 129 points saw him win the Bob Clark Trophy as WHL Top Scorer and the CCM CHL Top Scorer Award. Halbgewachs finished this season having played his entire WHL career with the Warriors. During this time he tallied 280 points (139G-141A) in 276 games.

The Sharks dipped into the WHL talent pool twice that day, signing Halbgewachs and the 19-year-old Joachim Blichfeld from the Portland Winterhawks in the same 24-hour span.

"Jayden is the top goal scorer in Canadian major juniors & has been one of the top point producers in the WHL over the last two seasons. His combination of elite speed, high-end skill & ability to pressure both ends of the ice make him a dangerous player." – Wilson pic.twitter.com/HpVba0CECA

Also earning a contract is Halbgewachs’ teammate Brayden Burke. On March 1, 2018, Burke was signed to an entry-level contract by the Arizona Coyotes. Prior to signing with the Coyotes, Burke helped the Warriors to the best record in the WHL, staying atop the standings for the majority of the season. In 59 games, Burke had 112 points (31G-81A) and a plus-46 rating. His 112 points showcased what has been a wonderful career for the skilled forward. Over his career with the Lethbridge Hurricanes and Warriors, Burke recorded 338 points (85G-253A) in 238 games for a 1.42 points-per-game average. Helping his team to the top of the standings for their first ever Scotty Munro Memorial Trophy as regular season champions, Burke also led them to the second round of playoffs, where the lost to the eventual Ed Chynoweth Cup winners. During those two rounds of playoffs, Burke added 21 points (9G-12A) in 14 games.

A week later, on March 9, 2018, the Everett Silvertips all-time leader in goals, assists, and points, Patrick Bajkov, signed his first professional contract with the Florida Panthers. As the Silvertips charged to the top of the Western Conference standings this season, Bajkov was one of the team’s many guiding forces on an offensively-dominant squad, leading the club with 92 points (30G-62A) in 67 games at the time of his contract signing. This season alone, Bajkov had 30 multi-point games, including a pair of five-point performances. Bajkov’s totals had him among the WHL’s best this season, placing him ninth in WHL scoring and third among all Western Conference skaters. He was tied for the fourth-most assists in the WHL this season. Bajkov added another eight points in his final five games to give him his first 100 (33G-67A) point season. The dominant forward was a force in the playoffs as well, leading his team to the 2018 Rogers WHL Championship Series, finishing the playoffs with 23 points (14G-9A) in 22 games.

Heading back to the Warriors as they saw the last of their overage players sign an entry-level contract. On April 2, 2018, Tanner Jeannot signed with the Nashville Predators as his team was competing in the first round of their playoff run. Jeannot finished fourth on the Warriors in scoring this season with 80 points (40G-40A) in 72 games. He also had four power-play goals, three short-handed goals, and three game-winning goals. The 6-foot-3, 215-pound winger played four seasons for the Warriors, recording 170 points (77G-93A) in 267 games. Jeannot was also a go-to-guy in the playoffs, recording 24 points (9G-15A) in 30 career playoff games.

On May 1, 2018, one final entry-level contract was handed out to an overage player. The day after the Hurricanes season came to an end, Brad Morrison signed a contract with the Los Angeles Kings, becoming the third 20-year-old to sign with the Kings in the 2017-18 season. Originally drafted in the 2015 NHL Draft, Morrison never signed a contract and later became a free agent. After some ups and downs with the Prince George Cougars and Vancouver Giants, Morrison found himself with the Hurricanes organization for a playoff run. His impressive play during the postseason made it hard to take an eye off him as he recorded 37 points (16G-21A) in 16 games, taking the Hurricanes to the 2018 Eastern Conference Championship. Even after the 2018 Rogers WHL Championship Series came to an end, Morrison remained the playoff point leader, earning himself a contract.

In addition to the nine players who signed with teams as free agents during the hockey season, the summer prior brought good news for Brandon Wheat Kings forward Ty Lewis. Lewis signed an entry-level contract with the Colorado Avalanche just a week into the 2017-18 season. He was coming off his first 30-goal campaign and had put up 68 points (30G-38A) in 70 games. The speedy winger proved his worth more this season, hitting the 100-point mark with 44 goals and 56 assists in 70 games. The Brandon, Man. product added 13 points (6G-7A) in 11 post season games. He finishes his WHL career with 191 points (84G-107A) in 190 contests.

Extremely honoured to sign with the @Avalanche couldn't be more excited for the road ahead!Thanks to everyone that's helped me along the way

Two overage players also signed contracts with the teams that drafted them. First, Ty Ronning signed with the New York Rangers, who drafted him in the seventh round of the 2016 NHL Draft. The small Vancouver Giants winger was passed on several times but the Rangers saw something in Ronning. Ronning showed what they saw in him this season, topping 60-goals and recording 84 points (61G-23A) in 70 games. He added seven points (1G-6A) in seven games during a first round playoff exit. Ronning’s impressive play saw him finish his WHL Career with 218 points (127G-91A) in 285 games and earn a contract on March 5, 2018.

OFFICIAL: #NYR have agreed to terms with forward Ty Ronning on an entry-level contract. pic.twitter.com/qKiXtgpD4W

A week later, Kelowna Rockets forward Carsen Twarynski signed with the Philadelphia Flyers. Originally selected by the Flyers in the third round, 82nd overall, of the 2016 NHL Draft, Twarynski exploded offensively in his first full season with the Rockets, scoring 72 points (45G-27A) in 68 games. He had 17 goals on the power-play, three short-handed and five game-winning goals. The 6-foot-2 winger would join the Lehigh Valley Phantoms after his WHL season, tallying a goal and an assist in five appearances.

As these men continue to chase their dreams of playing in the NHL, we thank them for all they have done for their communities and for the WHL.