A Season of Firsts: Recapping The FIrst WHL Goals for the 2019-20 Giants 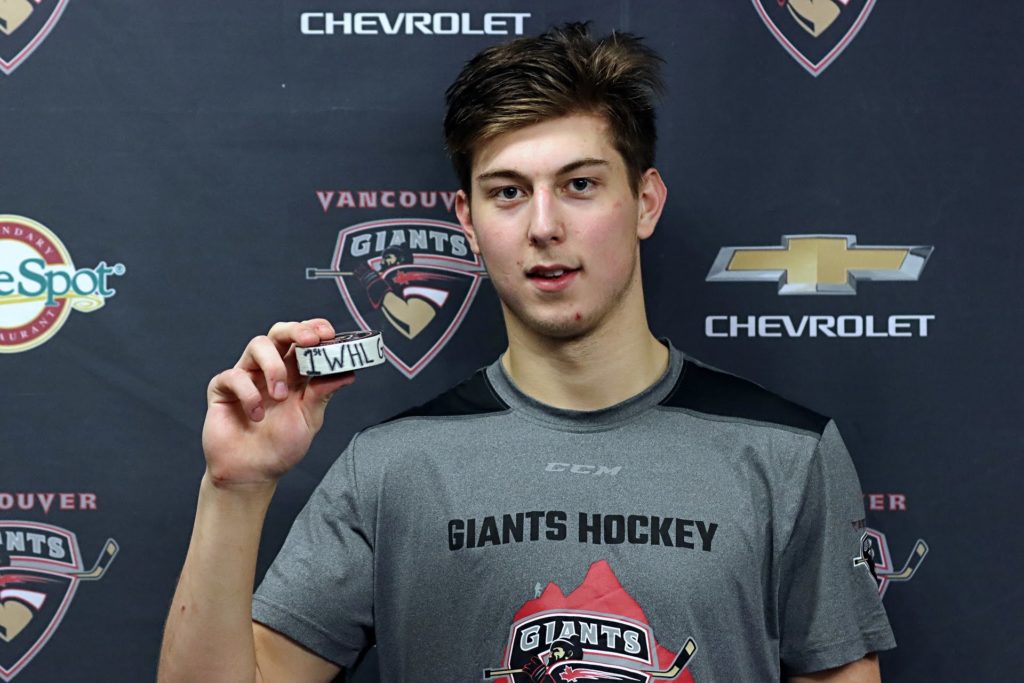 During the 2019-20 WHL season, eight different Vancouver Giants recorded their first goals in the WHL. Below is a recap of each of those eight goals.

In just his seventh career WHL game, Giants rookie forward Justin Lies picked the perfect moment and location for his first WHL goal. With an army of family and friends in the stands in Winnipeg, the Flin Flon, MB product ripped home a feed from Zack Ostapchuk on a two-on-one rush midway through the first period to give the Giants a 2-0 lead over the Winnipeg ICE. The G-Men would go on to win the game 4-0, giving them their first victory on their lengthy six-game Eastern road swing. Lies finished his rookie campaign with one goal and five assists in 49 games.

On that very same Prairie road trip, rookie Zack Ostapchuk sparked the Giants early in their Prairie trip finale against the Regina Pats. At 3:27 of the first period, Zack Ostapchuk ripped a shot from the left-wing circle that beat Pats goaltender Danton Belluk. Fittingly the goal was set up by Justin Lies who scored his first goal a few games prior off a setup from Ostapchuk. The Giants held on the win the game 4-2, and finished the Prairie road trip 3-3. Ostapchuk would go on to score four more goals before an injury ended his 2019-20 season.

Congratulations are in order for @ostapchuk_10, who scored his first career WHL goal last night!

In his long-anticipated WHL debut, rookie forward Cole Shepard made it count. With the Giants back at home after their lengthy Prairie trip, they got a huge boost when Cole Shepard suited up with his new team for the first time. The rest, as they say, is history:

Not only that, but Shepard also scored in the shootout later that night, helping the Giants to a 4-3 victory over the Broncos. Cole Shepard would go onto lead all Giants rookies in scoring with 11 goals and 18 assists for 29 points. He received the team’s Rookie of the Year Award, along with the High School Scholastic Player of the Year Award and the Most Sportsmanlike Player Award.

On Friday, November 8th the Vancouver Giants earned a spirited 3-1 victory at home against the Portland Winterhawks. The game winning goal that night came off the stick of Giants rookie d-man/forward Tanner Brown. At 7:25 of the first period Brown took a pass off the rush and wired a shot past Joel Hofer. You can relive Tanner Brown’s first WHL goal below:

Brown suited up in 57 games with the Giants in 2019-20, and finished with one goal, one assist and 44 penalty minutes.

After suffering a tough loss at home a night prior to Prince George, the Giants were looking to head into their holiday break on a positive note. That would mean a gutsy road victory against their division rivals, the Kelowna Rockets. Early in the second period with the Giants already up 1-0, rookie forward John Little delivered on the power play:

The Giants would hold on to secure a 4-3 victory. In January, John Little would be traded to the Tri-City Americans in exchange for Kaden Kohle. More on Kohle, a little later on in this story.

Fresh off their holiday break, the Vancouver Giants were looking for a late game spark in Victoria. With the score tied 1-1 in the third period, rookie Krz Plummer rose to the occasion:

Plummer’s first WHL goal served as the game winner, and he earned first star honours for his efforts that night. The 18-year-old is poised for a bigger role with the Giants in 2020-21 after suiting up in 33 games with the G-Men a season ago.

2000-born forward Holden Katzalay joined the Giants in late November on a three-game tryout. He impressed early on, and would eventually play a significant role with the Giants during their 2020 surge up the standings. His first WHL goal came in Kelowna on January 4th 25 seconds after the Kelowna Rockets had taken a 1-0 lead.

Katzalay finished with 16 points in 39 games with the Giants, and struck five more times prior to the shutdown of the 2019-20 WHL season.

Congratulations are in order for Kaden Kohle, who scored his first WHL goal tonight, against his former team no less! • • • 📸: @rjmedia.tech

In 25 games with the Giants, Kohle registered one goal and three assists for four points.