Ronning, Byram, Tendeck All Recognized by the WHL 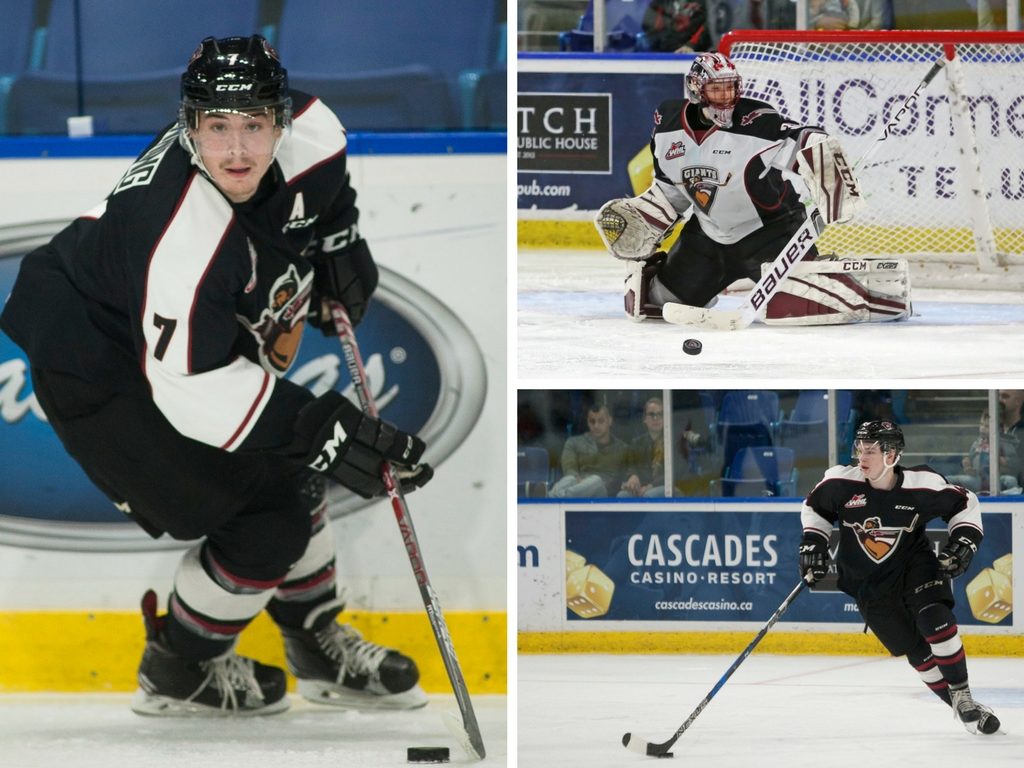 The Vancouver Giants in conjunction with the Western Hockey League are pleased to announce that forward Ty Ronning, defenceman Bowen Byram and David Tendeck have all been recognized by the Western Hockey League for their accomplishments during the 2017-18 season. Ty Ronning and David Tendeck were both named to the Western Conference Second All-Star Team, while Bowen Byram was named the Western Conference Rookie of the Year. These awards were all selected by WHL coaches and General Managers.

Over-age forward Ty Ronning (1997, Burnaby, B.C.) finished his historic campaign with 61 goals and 23 assists for 84 points. His 61 goals placed him second in the entire WHL behind only Moose Jaw’s Jayden Halbgewachs. Additionally, Ronning finished with a team-leading +12 rating, 18 power-play goals and was tied for the team lead in game-winning goals with nine. For his efforts, Ronning was named Co-MVP, The Plus-Minus winner, The Top Scorer and the Player’s Choice Award Winner for the Giants in 2017-18. Earlier this month Ronning signed a three-year entry-level contract with the NHL’s New York Rangers who drafted him in Round 7 in 2016. This marks his first WHL all-star nomination.

Sophomore goaltender David Tendeck (1999, North Vancouver, B.C.) finished the 2017-18 season with a record of 25-16-3-2. He finishes sixth in league goals-against-average (3.02), fourth in league save percentage (.912) and fourth in league shutouts (3). Tendeck was ranked as the #8 goaltender among all draft eligible North American goaltenders on NHL Central Scouting’s Mid-Term Rankings List. This marks his first WHL all-star nomination.

Rookie defenceman Bowen Byram (2001, Cranbrook, B.C.) was originally selected third overall by the Vancouver Giants in the 2016 WHL Bantam Draft. In 60 games this season Byram posted six goals and 21 assists for 27 points which led all 16-year-old defencemen in the Western Hockey League. Byram helped guide Team Canada Red to a silver medal during the 2017 World Under-17 Hockey Challenge that took place in Northern, B.C. and earlier this month was named Vancouver Giants Rookie of the Year. Byram will find out on May 2nd whether he’s named WHL Rookie of the Year. He’s up against Lethbridge Hurricanes forward Dylan Cozens.

The Vancouver Giants kick-off their Round 1 playoff series with the Victoria Royals on Friday, March 23rd at 7:05 PM in Victoria. Game 2 goes the next night on Saturday at 7:05 PM. The series then shifts back to Langley for Games 3 and 4 on Tuesday, March 27th and Thursday, March 29th. Both games are at 7:00 PM.