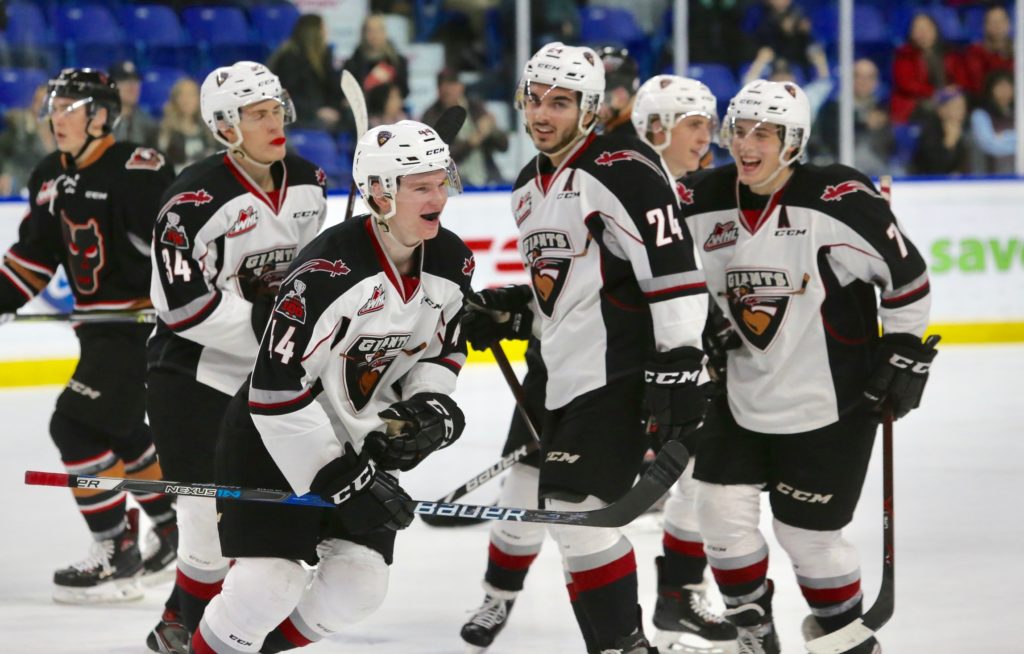 Jason McKee’s Vancouver Giants were dominant on both sides of the special teams coin Friday night at the LEC. Offensively the Giants clicked three times on the power play and killed off all eight of their penalties in a 4-2 triumph over the Calgary Hitmen. Ty Ronning and Bowen Byram each scored twice while Brayden Watts added three assists. Rookie Trent Miner stopped 31 of the 33 shots he faced to earn his first career WHL victory in his first career WHL start. Tristan Nielsen and Luke Coleman responded with goals for Calgary who dropped their fourth consecutive game.

Two nights removed from a 4-1 loss to the Giants, Calgary jumped out to a 2-1 lead in the first period. The two teams combined for three goals in a span of a minute and 16 seconds with Calgary scoring twice.

First at 6:03, Tristen Nielsen got Calgary on the board when he threw a puck towards the goal form the left-wing corner of the Giants zone. The puck deflected off the stick of the Giants defender, off the mask of Trent Miner and in for Nielsen’s 10th.

40 seconds later Vancouver answered when Tyler Benson connected a pass to the pinching Bowen Byram from the left point. Byram then skated in close and tucked a backhand shot past Calgary starter Nick Schneider and home for his fourth of the season and his first of two on the night.

36 seconds later though Calgary answered right back when Luke Coleman raced down the left-wing and hammered a slap shot past the glove of Miner for his 12th. Vancouver outshot Calgary 14-10, but trailed 2-1.

Period two was a much different story for the G-Men who outshot the Hitmen 19-6 and out-scored them 3-0 thanks to a stretch of three consecutive power play goals.

Just over two minutes later Bowen Byram wired home his second of the night off a one-timer from the right point to give the Giants their third power play goal of the game. The power play would end up three-for-six on the night, snapping a one-for-25 slump. The Giants led 4-2 after two periods and held a 33-16 lead in shots.

Dallas Ferguson’s Hitmen came out firing in the third period outshooting the Giants 17-7. They were aided by four power play chances, but none were successful. Trent Miner made the saves when needed and the defencemen in front of him continued to block shots and clear away traffic from his goal.

When the final horn sounded, Miner was mobbed by his teammates. He finished the night with 31 saves on the 33 shots he faced. He’s stopped 45 of the first 48 shots he’s faced in the WHL.

The victory gives the Giants their second straight win, and improves their record to 27-16-5-3. They now lead Kamloops by 11 points for third in the B.C. Division and they remain four points back of Victoria for second place while still holding two games in hand.

Up next for the Giants: The Medicine Hat Tigers tomorrow night at 7:00 PM. It’s the final game of their season-long eight-game home stand.

– Thanks to their eight-for-eight penalty kill, the Giants are now ranked 7th in the WHL in penalty killing percentage (79.1%). They started the night in 12th.

– Before the game, Dawson Holt was named Player of the Month for January. He had four goals and five assists in 12 games and was a +6.