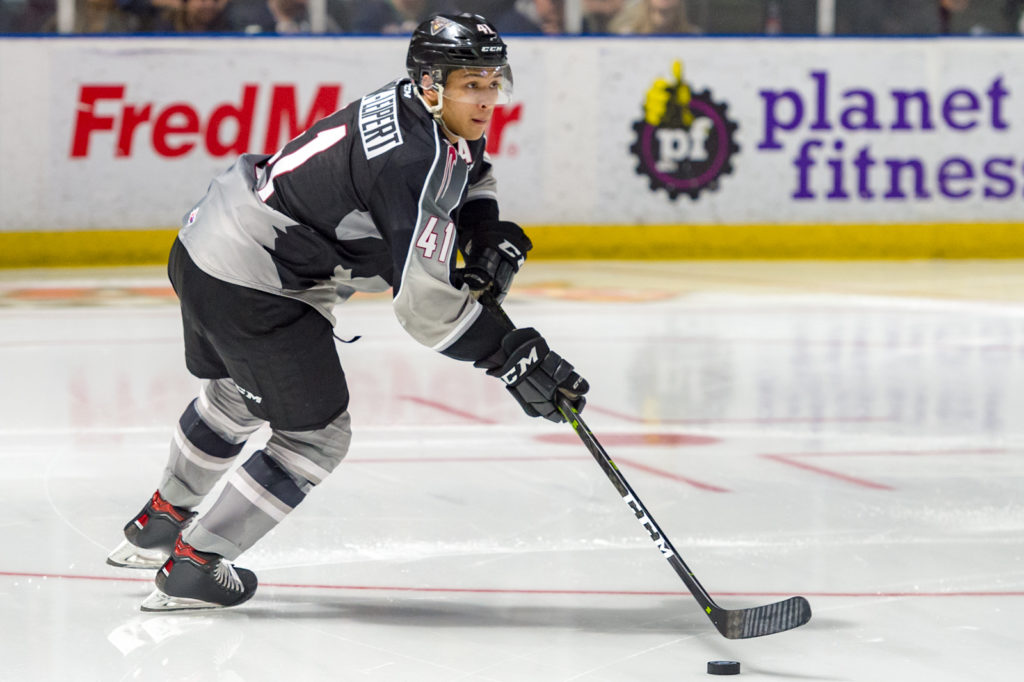 Saturday night in Kent, WA the Vancouver Giants (28-20-3-2) captured their ninth straight victory with a 6-2 triumph over the Seattle Thunderbirds (21-26-3-3). Calgary Flames prospect Milos Roman scored once in each period while Tristen Nielsen (1G, 2A), Trevor Longo (1G, 1A) and Holden Katzalay (2A) all recorded multi-point games. Between the pipes, David Tendeck stopped 21 of Seattle’s 23 shots to earn his seventh straight victory. Matthew Rempe and Mekai Sanders had the goals for Seattle. The Vancouver win, coupled with Victoria’s loss in Kamloops moves the G-Men within two points of second in the B.C. Division standings.

VAN – 3:10 into the first, Milos Roman (19) one-timed an Eric Florchuk feed past Seattle’s Roddy Ross on a power play to give the Giants a 1-0 lead. Tyler Preziuso also assisted.

VAN – Tristen Nielsen (27) restored the Giants lead at 17:38 off a shorthanded rush down the left-wing. Nielsen’s goal was set up by both Trevor Longo and David Tendeck.

VAN – Bowen Byram (8) increased the Giants lead to 3-1 at 19:09 off a shot from the left-wing point that made its way through traffic and home off a faceoff victory. Holden Katzalay and Cole Shepard both earned assists.

VAN – Milos Roman’s (20) second goal of the night came at 4:37 off a slick three-way passing sequence with Tristen Nielsen and Alex Kannok Leipert.

SEA – Matthew Rempe (10) moved Seattle back within two at 11:56 on a power play. Rempe parked himself in front of the Giants goal and knocked home a Connor Roulette rebound.

VAN – Milos Roman (21) recorded his first career WHL hat-trick just 61 seconds into the third period off a one-timer from the high slot. Roman’s goal was set up by both Justin Sourdif and Tristen Nielsen.

VAN – The final Giants goal of the night came courtesy of Trevor Longo (5) off the rush at 15:21. Michal Kvasnica and Holden Katzalay drew the helpers.

Next Game: A rematch with Seattle on Monday afternoon at 2:00 PM at the LEC.