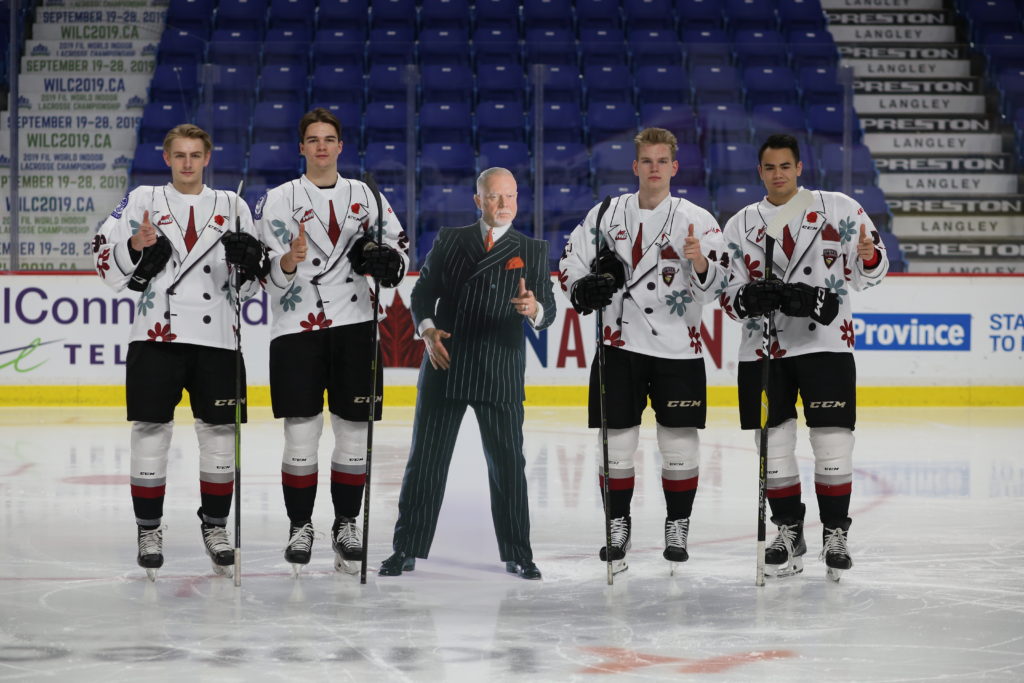 For a third straight season the Vancouver Giants in conjunction with the WHL, RE/MAX, Don Cherry and the Kidney Foundation of Canada are teaming up to host Organ Donation Night on February 15th when the Giants host the Spokane Chiefs. As part of the promotion, the G-Men will take the ice wearing commemorative Don Cherry themed jerseys.

Each Don Cherry themed jersey will have the individual player’s personalized nickname and number on the back. The game-worn jerseys are once again available via online auction with proceeds going towards the Kidney Foundation of Canada. The auction expires on February 20th at 1 PM.

“We are very excited to once again participate in this important and fun initiative with the WHL, RE/MAX, Don Cherry and the Kidney Foundation of Canada,” said Giants Senior Vice President, Dale Saip. “Our players look forward to this game every year, and once again we’re looking forward to providing our fans with the opportunity to bid on these one-of-a-kind jerseys, all while raising money for an important cause.”

Per the WHL:  From January through March 2019, all 17 WHL Clubs in Canadian markets will play host to their very own themed games, complete with a variety of special promotions for fans in attendance. A total of 1,000 limited second edition Don Cherry bobbleheads will be distributed to fans in attendance.

During the 2017-18 WHL Regular Season, participating WHL Clubs came together with RE/MAX to raise over $265,500, representing the largest public awareness and fundraising campaign in the history of the Kidney Foundation of Canada.

“On behalf of all RE/MAX associates in Western Canada, we’re super stoked to be partnering with Don Cherry again this year for this fantastic night of hockey fun and fundraising for the terrific cause, The Kidney Foundation of Canada,” said Elaine Langhout of RE/MAX of Western Canada. “My family was affected by kidney disease so it’s a cause close to my heart.  We encourage fans to come out and support the night when it comes to their town!”

“Thanks to RE/MAX, the WHL and all its fans, the number of transplants last year increased by 13 per cent,” said Don Cherry. “Let’s keep this momentum going by signing your donor card and talking to your family. It only makes sense.”

“The WHL and our 17 Western Canadian-based Clubs are very excited to be working with RE/MAX, the WHL’s longest-standing corporate partner, to once again this season promote donations and raise additional funds for the Kidney Foundation of Canada,” commented WHL Commissioner Ron Robison. “Thanks to the direct involvement of hockey icon Don Cherry and his family and our RE/MAX partnership, we are confident our fans across Western Canada will once again show their strong support for this very important cause.”