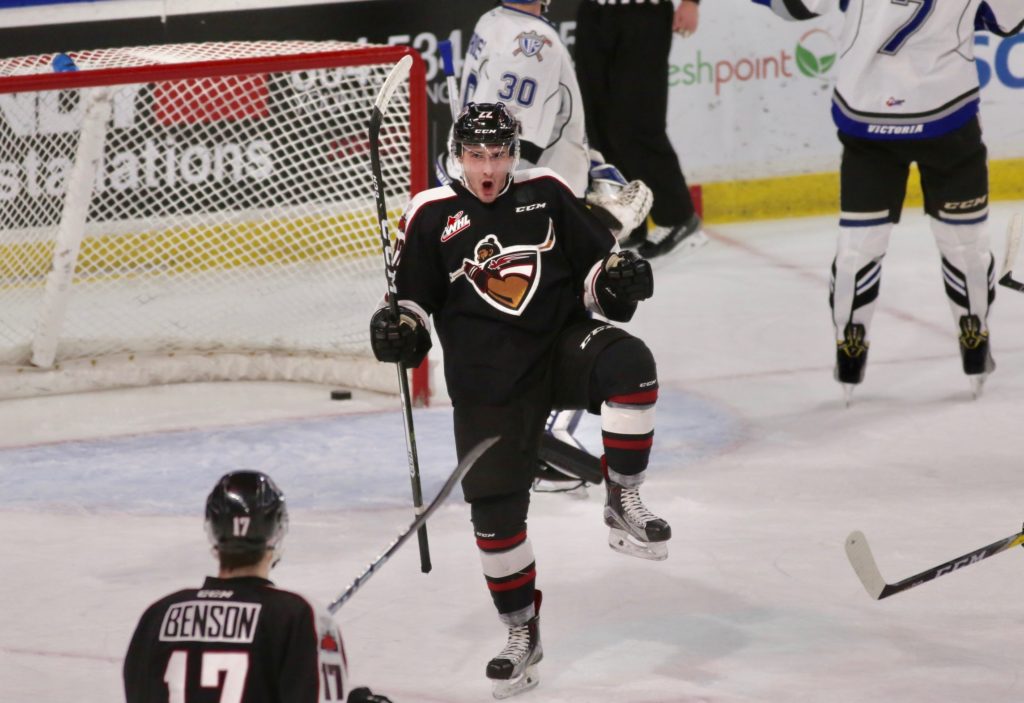 There were a number of ‘firsts’ that took place Friday night in Langley that helped guide the Giants to their fourth straight victory. Jared Dmytriw’s ‘first’ goal of the Giant came against his former team. Darian Skeoch’s ‘first’ of the season served as the game’s winning goal. And just for good measure Friday’s victory marked the ‘first’ time this season that the Giants have won four straight. Jared Dmytriw, Tyler Benson and James Malm each had two points Friday as the Giants defeated the B.C. Division leading Victoria Royals 3-1. Between the pipes David Tendeck earned his fourth straight victory turning aside 21 of the 22 shots fired his way. Noah Gregor had the lone goal in response for Victoria late in the second period.

Territorially the Giants were strong in the first period outshooting the Royals 8-4. Their strong defensive effort would be rewarded with two late strikes at the other side of the ice. With under a minute remaining Jared Dmytriw parked himself in front of the Victoria goal and deflected home an Alex Kannok Leipert point shot past Griffen Outhouse for his seventh of the season and his first goal as a Giant. Dmytriw’s marker came on a power play that finished one-for-two on the night. Then with 1.3 seconds remaining in the period, Giants 20-year-old Darian Skeoch one-timed a Tyler Benson pass through traffic and home from the left point for his first of the season.

3:26 into the second period the Tyler Benson, James Malm and Jared Dmytriw trio would strike again. A three-way passing play resulted in Tyler Benson one-timing home his 13th of the season from the right circle to increase the Giants lead to 3-0.

Victoria’s lone response came with under a minute remaining in the second period when the talented trio of Tyler Soy, Matthew Phillips and newly acquired Noah Gregor combined on what would end up as Gregor’s 14th goal of the season.

That would stand as the only blemish for the Giants defensively as they outshot Victoria 9-7 in the third period and never truly wavered from their strong two-way game in what ended up as a 3-1 final. Vancouver outshot the Royals 37-22 and improved their home record to 10-6, their overall record to 16-13-2-2 and they’ve now improved to 2-3-0-1 against Victoria this season. The G-Men remain three points ahead of Kamloops for third place in the B.C. Division standings.

Next up for the Giants: A rematch tomorrow night in Victoria against the same Royals club at 7:05 PM. That game marks the second game of three games in three days for the G-Men who still have their Teddy Bear Toss game taking place Sunday at 4:00 PM at the Langley Events Centre.