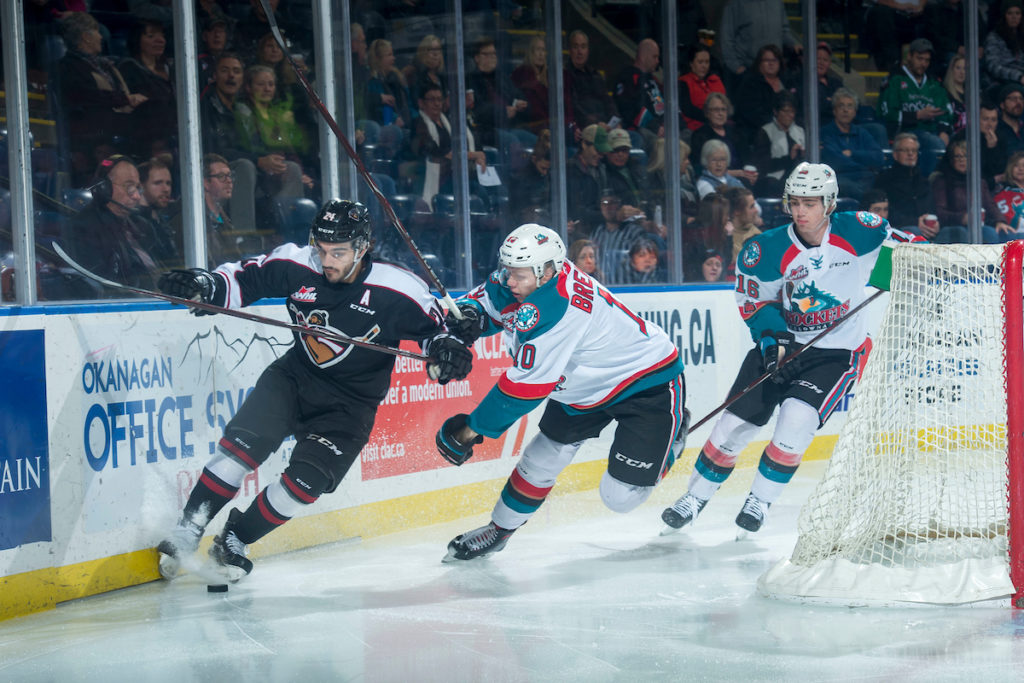 Wednesday night at Prospera Place the Kelowna Rockets skated to a 4-1 victory over the Vancouver Giants. Canucks prospect Kole Lind and Flyers prospect Carsen Twarynski each chipped in with a goal and an assist for the Rockets who now stand alone in first in the B.C. Division standings. Kelowna netminder Brodan Salmond made 25 saves for Kelowna while Giants starter David Tendeck responded with 32 of his own. Davis Koch had the lone Giants goal which came late in the second.

The opening 20 minutes were tough on the Giants who were outshot 15-2. Kole Lind opened the game’s scoring for the Rockets when he snuck a shot under the left arm of Tendeck and home for his 28th off a three-on-two rush.

Vancouver nearly tied the score mid-way through the period, but Brodan Salmond dove to his left and robbed Matt Barberis’ one-timer from the right-wing. That was Salmond’s first stop of the game.

Late in the period Tendeck came up big numerous times for the Giants to keep his team within striking distance.

Kelowna pushed their lead to 2-0 at 6:09 of the middle-frame when the tandem of Leif Mattson and Connor Bruggen-Cate combined on a shorthanded two-on-oh rush. From the right-wing, Mattson forced Tendeck to commit to his left before sliding a pass to Bruggen-Cate in front who knocked it home into the empty net for his 15th.

Late in the second the Giants started to mount more pressure in the offensive zone. Brodan Salmond made difficult saves off Jared Dmytriw and Cyle McNabb, but with time winding down in the period the Giants would eventually solve him.

It all started when Jared Dmytriw won a foot-race for the puck against Cal Foote in the Kelowna zone. Dmytriw freed the puck to Matt Barberis who then quickly found Tyler Benson in the high slot. Benson’s shot was stopped by Salmond but the rebound popped right out to Davis Koch who knocked it home for his 20th of the season. Koch’s goal came with just 47 seconds left in the second period. Shots were 27-14 Kelowna through two.

69 seconds into the third the Giants believed they’d tied the game when Jared Dmytriw appeared to stuff home a shot from in close at the left side of the net. But after a lengthy review the official determined that the puck did not cross the line, and the score remained 2-1 Kelowna.

Moments Dmytriw had another point-blank opportunity, but hammered a one-timed shot from the right circle clean off the left post off a slick drop pass from Bowen Byram.

Vancouver kept coming, but Salmond and the Rockets would not relent their lead. Then at 11:21 of the third, the Rockets snagged some insurance when Carsen Twarynski one-timed home a feed from Kole Lind for his team-leading 34th.

Dillon Dube then ended all hopes of a Giants comeback with an empty-netter at 17:43 giving the Rockets the 4-1 cushion.

Final shots were 36-26 for Kelowna who snapped a two-game losing streak with their 19th win at home. For Vancouver it halts a three-game winning streak and gives them just their fifth regulation loss since December 1st – A span of 27 games. Vancouver’s power play went zero-for-four while the Rockets were scoreless on their only power play opportunity.

Up next for the Giants – A home showdown with the defending WHL champs, the Seattle Thunderbirds on Friday night at 7:30 PM at the Langley Events Centre.