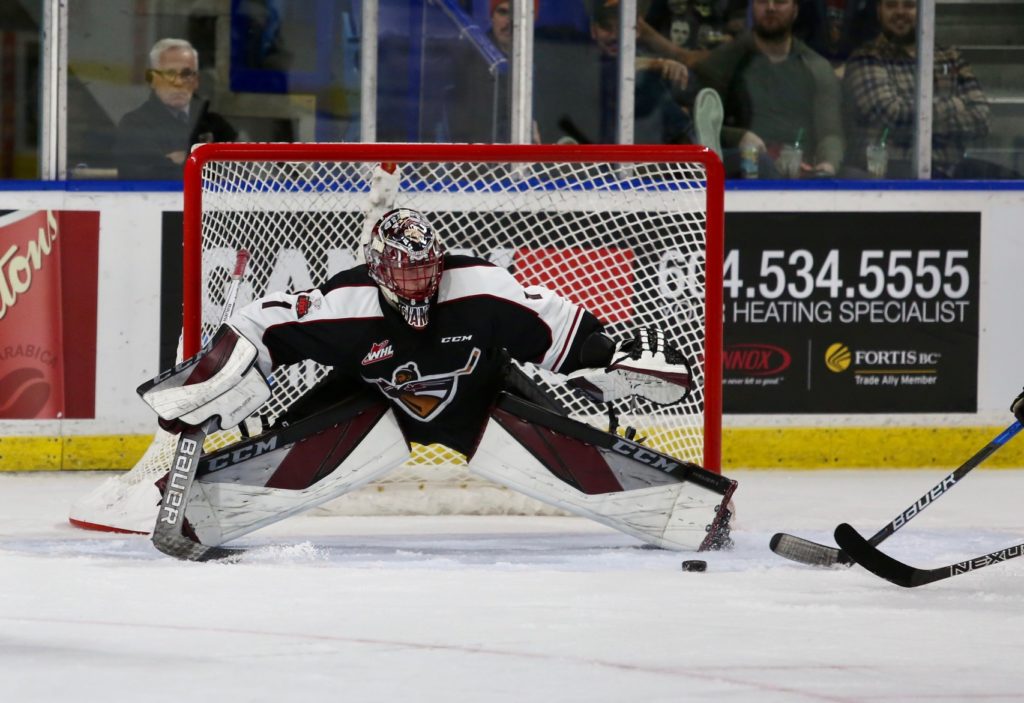 Friday night at the Langley Events Centre the Vancouver Giants dropped a 3-2 decision to the Kelowna Rockets in front of 3436 frenzied fans. Rockets forward Dillon Dube broke up a 2-2 tie early in the third lifting the Rockets to their 13th victory of the season. Brendan Semchuk and Dawson Holt supplied the goals for Vancouver. Special teams were a big factor as the Rockets struck twice on the power play and once shorthanded to earn their three goals while the Giants went one-for-eight on their power play chances. James Porter was stellar in goal for Kelowna making 30 saves while Todd Scott performed well in response for Vancouver making 21 of the 24 saves.

The Rockets scored one goal in each period and all three goals came early. Carsen Twarynski snagged the game’s first goal just 91 seconds in while shorthanded to lift Kelowna ahead 1-0. Todd Scott attempted to clear the puck off the class and out, but his clear ended up right on the stick of Twarynski who snapped home his team-leading 14th unassisted.

Less than three minutes later Brendan Semchuk responded with his seventh of the season for the Giants. Porter stopped Tyler Benson’s initial shot from the right circle but the rebound went right to Semchuk in front and he wasted no time blasting the rebound home.

Shots were 11-8 for Vancouver after one and the score was tied 1-1.

At the 2:26 mark of the second period the Rockets made it 2-1 when Kyle Topping deflected home a Cal Foote point shot on a power play. The Giants argued that Topping’s stick was above the goal-post when he deflected it home, but after a lengthy review the officials confirmed their initial goal call the visitors had their second lead. It lasted all of 40 seconds.

Dawson Holt answered right back for the G-Men when he pounced on Alex Kannok Leipert’s rebound and knocked it into the open net for his third of the season. Brayden Watt’s earned a second assist on the Giants goal which came at 3:06 of the middle frame.

The final goal of the game came at 3:13 of the third period off a Kelowna power play which came off a controversial goaltender interference call against Giants forward Ty Ronning. Dillon Dube snuck home his 13th of the season from the right-wing circle to give the Rockets their second power play goal of the night. Their power play finished two-for-four.

From there, Rockets netminder James Porter did the rest stopping all 10 Giants shots fired his way in the final period to help snap the Rockets two-game losing skid. Final shots were 32-24 for the Giants who are now 1-1-1-0 on the season against Kelowna.

With the victory the Rockets are now five points ahead of the Giants for second place in the B.C. Division while the Giants remain two points ahead of the Prince George Cougars for third. It won’t get any easier for the Giants (10-11-2-2) as they head to Everett Saturday to face a Silvertips team (12-12-1-1) that have won two straight. Puck drop goes at 7:05 PM from Xfinity Arena.