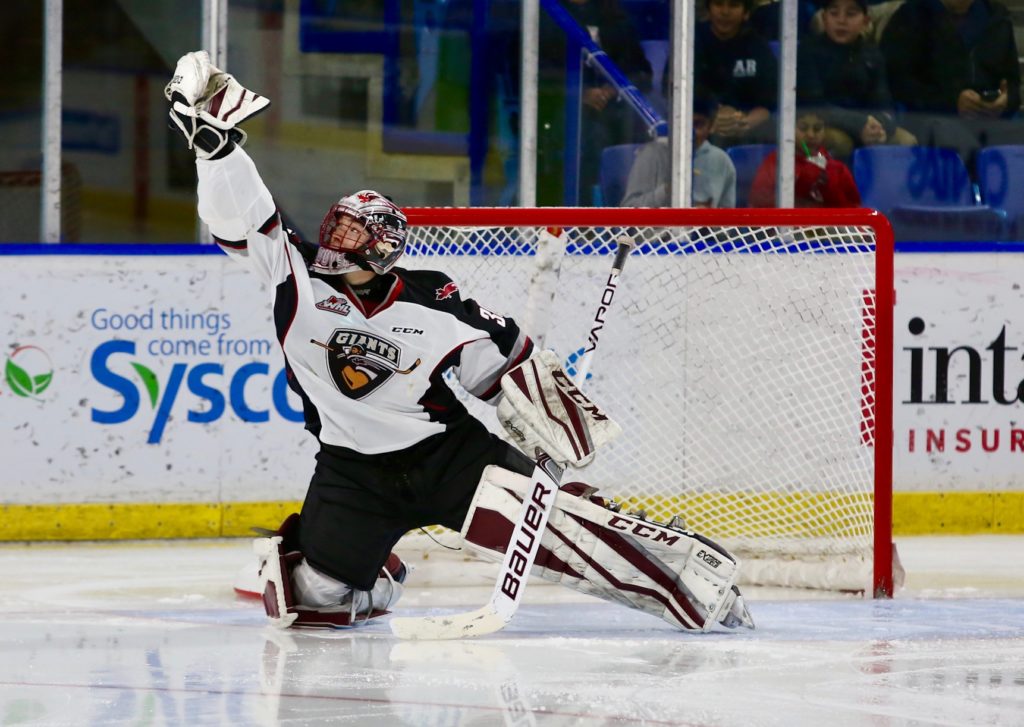 Wednesday night at the Langley Events Centre the Vancouver Giants captured their third straight victory in a 4-2 triumph over the Red Deer Rebels. James Malm scored twice for the G-Men while captain Tyler Benson recorded three assists. Ty Ronning extended his goal-scoring streak to eight straight games and between the pipes David Tendeck put forth his second straight first-star performance for the Giants who improved to 9-8-2-2. Kristian Reichel and Brandon Cutler had the goals in response for Red Deer.

The suddenly surging Vancouver Giants power play got the offense started at the 7:48 mark of the first period. Tyler Benson’s initial shot from in close was stopped by Red Deer’s Ethan Anders, but James Malm hopped on the rebound and scooped a back-hand home for his ninth of the season and his first of two goals on the night. Over the span of his last three games, Malm has scored six goals and added two assists for eight points. The Giants power play finished the game one-for-two and is now nine for its last 18.

With seconds winding down in the first, Red Deer tied the game when Kristian Reichel deflected home a Jacob Herauf point-shot past David Tendeck. Reichel’s ninth goal came with just 29 seconds remaining in the first period and the score was tied 1-1 after one. Red Deer outshot Vancouver 11-9 in the opening 20 minutes.

At 6:17 of the second period Red Deer took a 2-1 lead when second year forward Brandon Cutler raced down the left wing and placed a perfect shot past Tendeck and in for his first goal of the season. The Rebels controlled play for most of the second period, but in the back-half of the middle frame the Giants would find the equalizer.

Off an odd-man rush, rookie defenceman Bowen Byram fed forward Brayden Watts who cut to the middle and snapped his eighth of the season past the Rebels netminder to tie the game 2-2. Shots were 25-20 for Red Deer after 40 minutes but the score was dead-locked at two goals apiece.

Early in the third the Rebels thought they’d taken a 3-2 lead when Reese Johnson parked himself in front of the Giants goal and directed the puck towards the goal line. David Tendeck swatted the puck out of mid-air with his right hand to keep the puck from crossing the line. The play was originally ruled a goal on the ice, but was overturned by the officials. Moments later the Giants capitalized.

With just under eight minutes remaining in the third, James Malm once again won the race to a Tyler Benson rebound, and knocked home his second of the game past a sprawled Ethan Anders to give the Giants their second (and final) lead of the night.

Then with second winding down in the third, Giants 20-year-old Ty Ronning extended his goal-scoring streak to eight straight games when he buried his 20th of the season into the empty net. Ronning’s goal was set up by Tyler Benson who unselfishly fed Ronning the puck on a three-on-one rush up the ice on the empty net. Seconds earlier rookies Milos Roman and Bowen Byram both did great work defensively to clear the zone when Red Deer had strong pressure applied. Roning’s goal cemented the Giants 4-2 home victory, giving them their ninth victory on the season and their third consecutive win.

With the victory the Giants remain in third place in the B.C. Division, three points back of second-placed Kelowna and four points ahead of the Prince George Cougars who were also victorious on Wednesday night.

The Giants will look to make it four straight victories when they head to Kamloops Friday night to battle the Kamloops Blazers at 7:00 PM at the Sandman Centre.