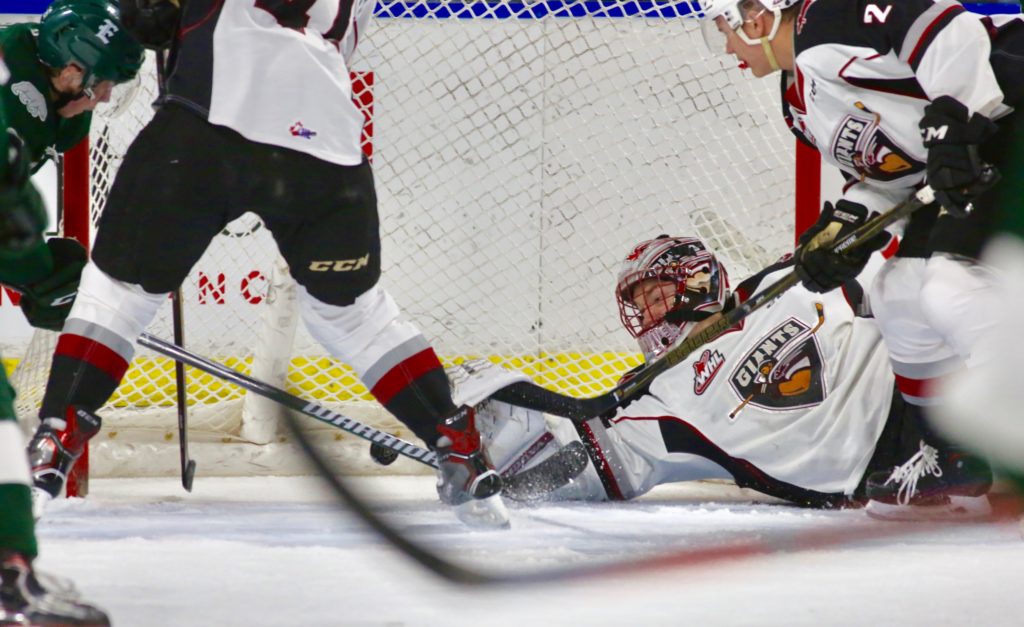 Jason McKee’s Vancouver Giants are starting to get healthy, and on Friday night in snowy Langley they took the top team in the Western Conference to the limit. The Everett Silvertips (40-17-2-3) prevailed 2-1 over the Vancouver Giants (31-21-5-3) on Friday on the strength of 29 saves from Carter Hart, and some timely second period scoring. Connor Dewar and Martin Fasko-Rudas scored in the second period for Everett while Davis Koch responded with the Giants lone goal. Giants netminder David Tendeck was strong in defeat stopping 26 of Everett’s 28 shot attempts.

Neither team could solve the other in the opening 20 minutes. Carter Hart and the Silvertips managed to kill off three unanswered Giants power plays in the first, while David Tendeck was sharp at the other side not allowing the high-octane Everett offense to beat him.

Early in the second though, the Silvertips found pay dirt when Connor Dewar snuck a backhand past David Tendeck off a rebound. Dewar’s 31st came on the only Everett power play of the game.

Moments later, David Tendeck robbed Dewar of his second of the game when he kicked out his left pad to stop him on a breakaway chance.

Back came the Giants at 10:42 when 19-year-old Davis Koch got favorable positioning in front of the Everett goal and whacked home a rebound past Hart’s right pad and home for his 21st. Koch’s goal was assisted by both Tyler Benson and Ty Ronning.

Everett answered with the game-winner a minute and 22 seconds later. Garrett Pilon started the play when he fired a shot wide of the net from the right-wing. The puck bounced off the back boards and behind David Tendeck in the blue paint of the net. Everett’s Martin Fasko-Rudas won the race to the loose puck and tucked it across the line to restore the Everett advantage.

The score remained 2-1 for the rest of the second, and ultimately the rest of the game. Tyler Popowich, Tyler Benson and James Malm all hand terrific chances to score in the final stanza, but Hart and the Silvertips weathered the storm, denying the Giants on all nine of their third period shot attempts. Vancouver outshot Everett 30-28 through 60 minutes, but came up short by a 2-1 margin.

With the win, the Everett Silvertips become the third team in the WHL to arrive at 40 wins. They remain nine points ahead of Portland for first in the US Division. With the loss, the Giants remain five points back of Victoria for second and 11 points ahead of Kamloops in the B.C. Division standings. The Giants will host Kamloops on Monday night at 7:00 PM at the LEC.