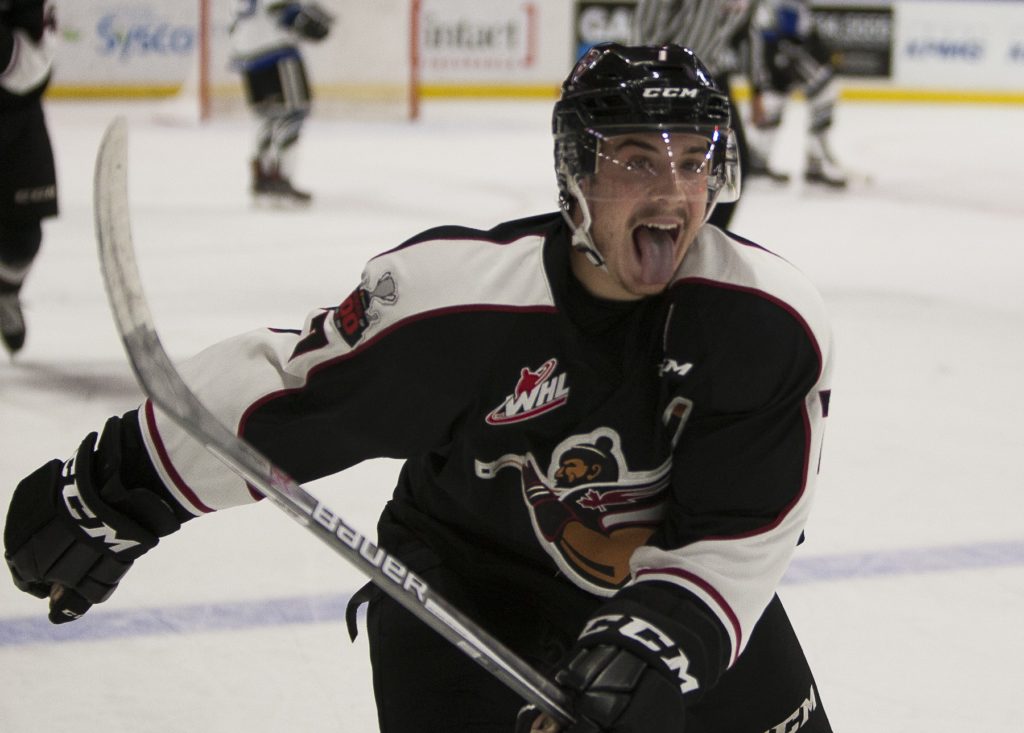 The Vancouver Giants have earned three of four available points so far this weekend thanks some heroic goaltending and timely scoring against the league leaders. Saturday night at the Langley Events Centre the Vancouver Giants earned a 4-1 victory over the Victoria Royals. Ty Ronning and Dylan Plouffe offensively while goaltender David Tendeck was brilliant for the Giants stopping 37 of the 38 shots fired his way. Igor Martynov had Victoria’s lone goal late in the first. The win for the Giants vaults them back into the top three in the B.C. Division standings with 18 points through 19 games.

Early in the game David Tendeck made a statement for his team when he denied Calgary Flames prospect Matthew Phillips on a breakaway in the early minutes. Tendeck made several highlight-reel saves throughout the night en route to the victory. For just the second time in 21 games, Matthew Phillips was held without a point for the Royals.

13:03 into the opening period the Giants drew first blood when Ty Ronning pounced on a bouncing puck in the slot and wired a shot past Royals starter Griffen Outhouse. Ronning’s first of two on the night extended his goal-scoring streak to six consecutive games. Dylan Plouffe and Brad Morrison assisted on the goal.

Period one ended with the score tied 1-1 and the Royals leading 14-12 in shots.

Victoria controlled the pace of play in the second outshooting the Giants 15-6, but the Giants captured the lone goal. It came off the stick of James Malm at the 8:13 mark off a low shot from the right circle. Malm’s fifth of the season was assisted by Alex Kannok Leipert and Dylan Plouffe.

Early in the third period the Royals got into some penalty trouble when Ralph Jarratt was assessed a double-minor for boarding, and the Giants made them pay. At 4:36 Brad Morrison ripped his sixth of the season past the stick of Griffen Outhouse off a Ty Ronning rebound to increase the Giants lead to 3-1.

Ty Ronning cemented the Giants victory with an empty-net goal with 10 seconds left. Prior to Ronning’s second of the night, David Tendeck made some clutch saves in the final minutes, keeping his team ahead. The final shots were 38-27 for Victoria but the Giants went four-for-four on the penalty-kill and one-for-five on the power play.

With the victory the Giants improve to 3-4 at home and 7-8-2-2 on the season. Their 18 points puts them alone in third in the B.C. Division standings two points ahead of Prince George. Next up for the G-Men: The Edmonton Oil Kings tomorrow afternoon at 4:00 PM at home.