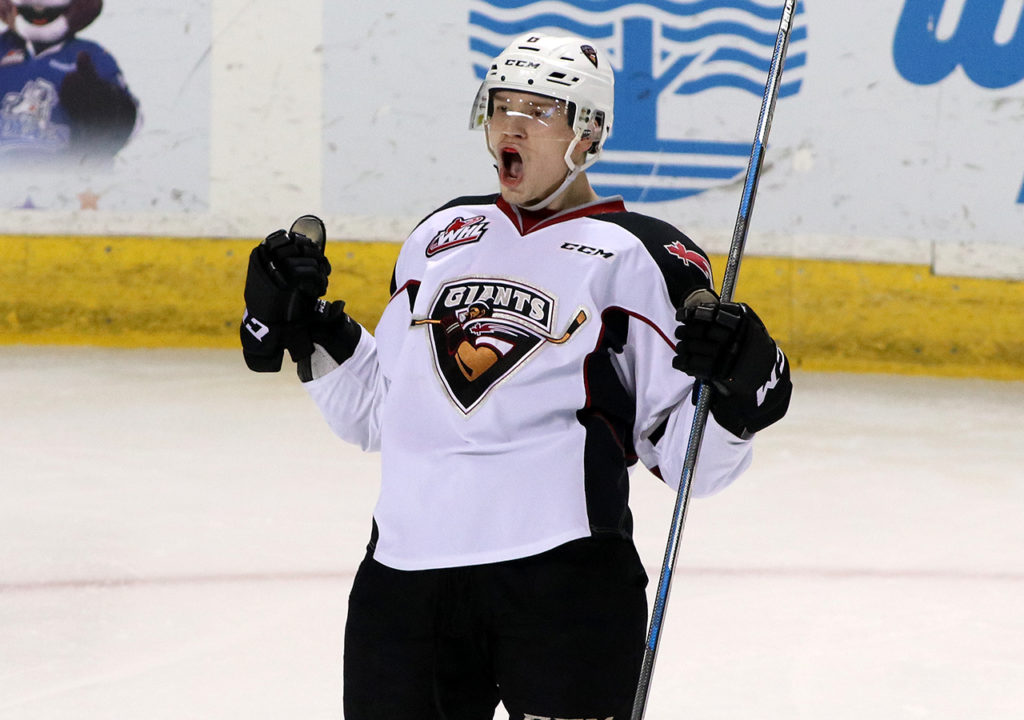 Jason McKee’s Vancouver Giants are rolling! One night removed from a 3-1 home victory over Victoria the Giants followed up with a 6-2 victory Saturday in the provincial capital against those same Royals. Dylan Plouffe, Ty Ronning and Brayden Watts each scored twice for the G-Men while rookie goaltender Todd Scott turned aside 25 of the 27 shots fired his way to earn the win in goal. Vancouver outshot the Royals 44-27 and have now won five straight games and seven of their last eight overall. Matthew Phillips had a goal and an assist in response for the Royals who have dropped three straight games.

Vancouver stormed out the gates in the first period peppering the Victoria net with 19 shots while only surrendering six against. Royals netminder Griffen Outhouse was superb in the first stopping all of Vancouver’s attempts, many of which were solid ‘Grade A’ chances. At 11:45 of the first the Royals rewarded their goalie with some offense when Matthew Phillips spun off a check in front of the Giants net and whacked home his own rebound for his 24th of the season.

Early in the second period the Royals thought they’d made it a 2-0 game when rookie Tarun Fizer thought he’d beaten Todd Scott on a wrap-around try. The officials originally ruled it a goal but after review they reversed their decision and the game remained 1-0 Victoria.

Todd Scott was impressive in the middle frame for Vancouver keeping his team within a goal. His best sequence of saves came off defenceman Ralph Jarratt who had two point-blank chances from in close that Scott denied.

With time winding down in the second the Giants finally solved Outhouse when Brayden Watts raced down the left wing, took a James Malm pass and roofed a shot past the glove of Outhouse and under the cross bar for his ninth goal of the campaign.

Then with 18 seconds left in the period, Matt Barberis’ point shot deflected off Ty Ronning and past Outhouse to give the Giants a 2-1 advantage. That goal marked the first of two on the night for Ty Ronning who arrived at the 30-goal mark for the second time in his WHL career. Shots were 27-20 for the Giants through two periods and they led 2-1.

A minute and nine seconds into the final period the Royals tied it when Eric Florchuk converted off a pass from Matthew Phillips from the high slot. Florchuk’s seventh was placed perfectly over the left shoulder of Todd Scott.

The tie would last a grand total of 13 seconds.

At 1:24 of the third period Dylan Plouffe scored the game winning goal off a blast from the top of the left circle. Plouffe’s fifth of the season sets a new season high for him with goals. He wasn’t finished.

At 7:22 Plouffe struck again on the Giants first power play attempt of the game. His second of the night came off a clever low shot from the right circle that snuck its way through traffic and past the right pad of Outhouse. The Giants power play finished one-for-three on the night while the penalty kill went a perfect two-for-two.

With time winding down in the third, Todd Scott stayed sharp for Vancouver making some important saves when called upon, and in the final minute of the game his teammates would add two more insurance markers.

With the victory the Giants improved their record to 17-13-2-2. They’re five-game winning streak marks the first time the Giants have won five in a row since a stretch in 2014-15 when the Giants won seven straight games (November 29th through December 16th, 2014). The win coupled with a Kamloops loss moves the Giants five points ahead of the Kamloops Blazers for third in the B.C. Division and also within five points of both Victoria and Kelowna for first in the B.C. Division standings. Up next: Teddy Bear Toss, Sunday afternoon at 4:00 PM at home against the Prince George Cougars.

– With 31 goals on the season Ty Ronning has matched his previous season high for goals which took place during the 2015-16 season.

– The Vancouver Giants have gone four straight games without surrendering a power play goal against.

– Brayden Watts led all Giants with a +4 rating and seven shots on goal Saturday in Victoria.