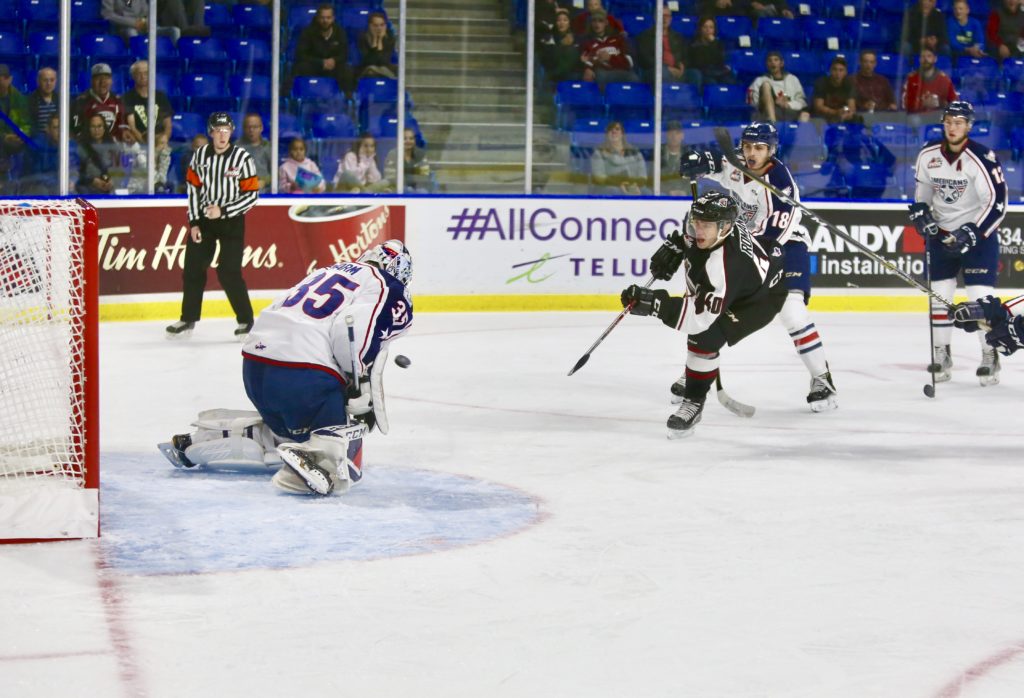 Back-to-back Fridays – Back-to-back 6-3 victories for the Vancouver Giants. Friday night at the Langley Events Centre the G-Men took game one of a weekend double-header over the Tri-City Americans. James Malm paced the Giants with four assists while Owen Hardy and Brayden Watts had two goals apiece. David Tendeck earned his second win in a row in goal making 26 saves on 29 shots fired his way. At the other end Isaac Johnson scored twice for Tri-City.

The visitors staked themselves to an early 2-0 lead. Isaac Johnson buried his first of two on the night just a minute and 24 seconds into the game on a power play to put Tri-City on the board. Then at the 13:06 mark, Maxwell James snuck a low shot through the legs of David Tendeck and home off a shot from the right wing to extend their lead.

Late in the first the Giants countered when Brayden Watts parked himself in front of Tri-City starter Beck Warm and knocked home a James Malm pass for his second goal of the season, and first of two on the night. Shots were even at 13-13 through 20 minutes.

Period two was dominated territorially by the Giants who outshot Tri-City 18-4. At 5:54 of the period Giants rookie Tyler Ho took a pass at center ice, used his speed to sneak through two defenceman and stuffed home his first WHL goal through the legs of Warm to tie the game at two. Then at 16:07, Brayden Watts and James Malm combined again on a phenomenal two-way passing play that resulted in Watts’ second of the night and a 3-2 Giants lead.

Isaac Johnson responded with his second of the game at 4:53 of the third for the Ams, just as a Giants penalty had expired. From then on though, it was all Giants.

After hitting a goal post and a crossbar earlier in the night, it felt like it was only a matter of time before Ty Ronning found the back of the net for Vancouver. At 11:08 his persistence paid off when he snuck into the slot, snagged a Brad Morrison pass and roofed his shot over the right shoulder of Warm to make the score 4-3.

Owen Hardy followed up with a goal 61 seconds later to give the Giants their first two-goal cushion of the night. He would then add one final dagger at 14:29 when he rifled his third of the year past Warm off a two-on-one rush.

6-3 would end up as the final as the Giants outshot Tri-City 39-29. The Giants finished zero-for-four on the power play, but had many good looks throughout the night. Their penalty-kill went three-for-four against a Tri-City attack that had the fourth best power play in the WHL a season ago.

With the victory the Giants improve their overall record to 2-2 and their record on the home stand to 2-1. Tri-City had a two-game winning streak snapped and they now sit at 2-3. The two teams will meet again tomorrow night at the Langley Events Centre with a 7:00 PM puck drop.

A reminder that the Giants will be donning special commemorative Don Cherry themed jerseys which will be eventually be autographed and auctioned off with all proceeds going towards the Kidney Foundation of Canada.