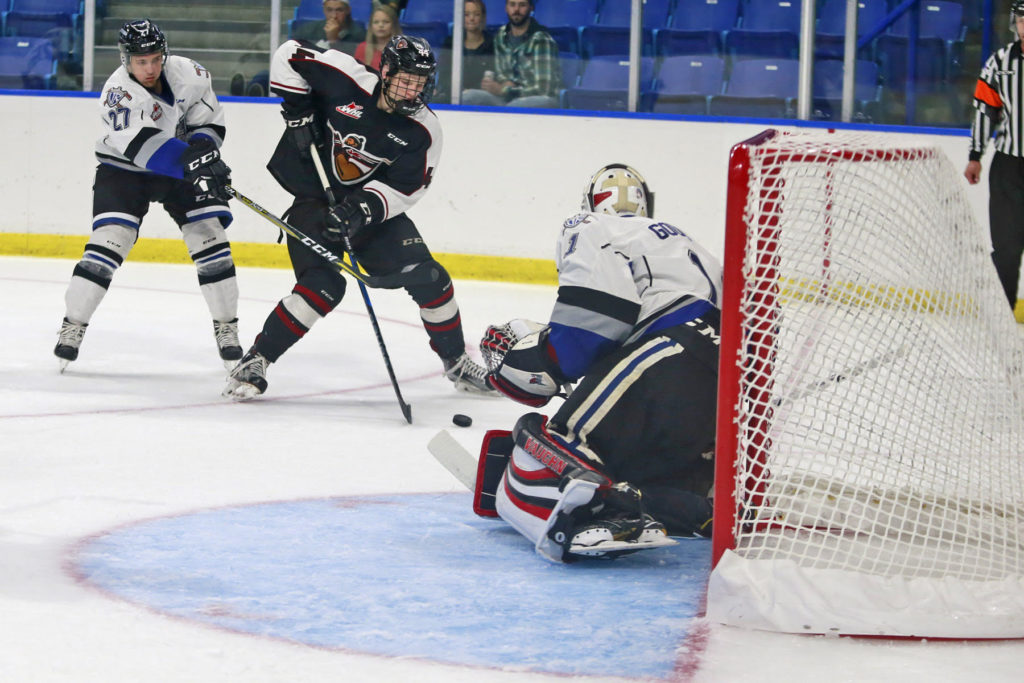 Make it three consecutive preseason victories for the Vancouver Giants. Saturday night at the Langley Events Centre the Giants earned a 3-2 victory over the Victoria Royals. Bowen Byram led the charge with a goal and an assist for the Giants while Jack Flaman and Milos Roman also scored. Regan Nagy had two assists in response for the Royals. Between the pipes Giants goaltenders Todd Scott and Ryan Kubic combined for 27 saves as the Giants are now 4-1 in the exhibition season.

Rookie netminder Todd Scott was sharp in the first for the Giants as he turned aside all 10 shots fired his way. His best save came late in the frame off a point-blank chance from Kaid Oliver in close.

Moments later 20-year-old Jack Flaman opened the scoring for the Giants at 18:17 of the first period. With the Giants on a five-on-three power play, Flaman parked himself in front of Royals starter Dean McNabb and redirected home a left-wing feed from Bowen Byram. Flaman’s first of the season was also assisted by Alex Kannok Leipert. Flaman’s marker would stand as the only goal of the first.

Todd Scott’s goaltending heroics continued early in the second period as made a sprawling left pad save off Ryan Peckford which came as a result of a Victoria two-on-one rush.

A phenomenal save point blank off of Ryan Peckford keeps the game at 1-0 G-Men! pic.twitter.com/ALvoFJTUr8

Shortly thereafter the Giants had a two-on-one chance of their own and Slovak Milos Roman converted a Dylan Plouffe pass to make it 2-0 G-Men. For Roman it was his second goal in as many nights.

Victoria finally solved Todd Scott at the 7:37 mark of the second when Dino Kambeitz snapped a quick shot through the five-hole for his second of the preseason. That would be Scott’s only blemish on the night as he finished with 14 saves on 15 shots faced in his half of the game. In came veteran Ryan Kubic for the Giants while the Royals also made a change swapping out Dean McNabb in favor of Brock Gould. McNabb left the game with 12 saves on 14 shots faced.

Kubic would be tested early and often by the Royals who ended up outshooting the Giants 11-6 in the period. His best save was a diving cross crease stick save off Dante Hannoun which came while the Giants were shorthanded. Despite trailing 21-17 in shots after two, the Giants led 2-1 through 40 minutes.

Victoria’s power play would get them back on even terms at 7:52 of the final period. Off a two-on-one rush, Eric Florchuk one-timed a Regan Nagy pass up high and over the right shoulder of Ryan Kubic to make the game 2-2.

The Giants found an answer though at the 14:40 mark of the third courtesy of rookie defenceman Bowen Byram. The third overall pick in the 2016 WHL Bantam Draft took the puck from center, beat the defender wide along the left wing and then wrapped the puck around the net and past the left skate of Brock Gould and home. Byram’s second goal of the preseason was unassisted and stood as the game winner.

BO KNOWS!@BowenByram on a wrap-around restores the Giants lead! 3-2 with 5:20 remaining!

The Giants will wrap up their preseason Sunday with a 4 PM showdown with the Everett Silvertips (2-1) at the Langley Events Centre.