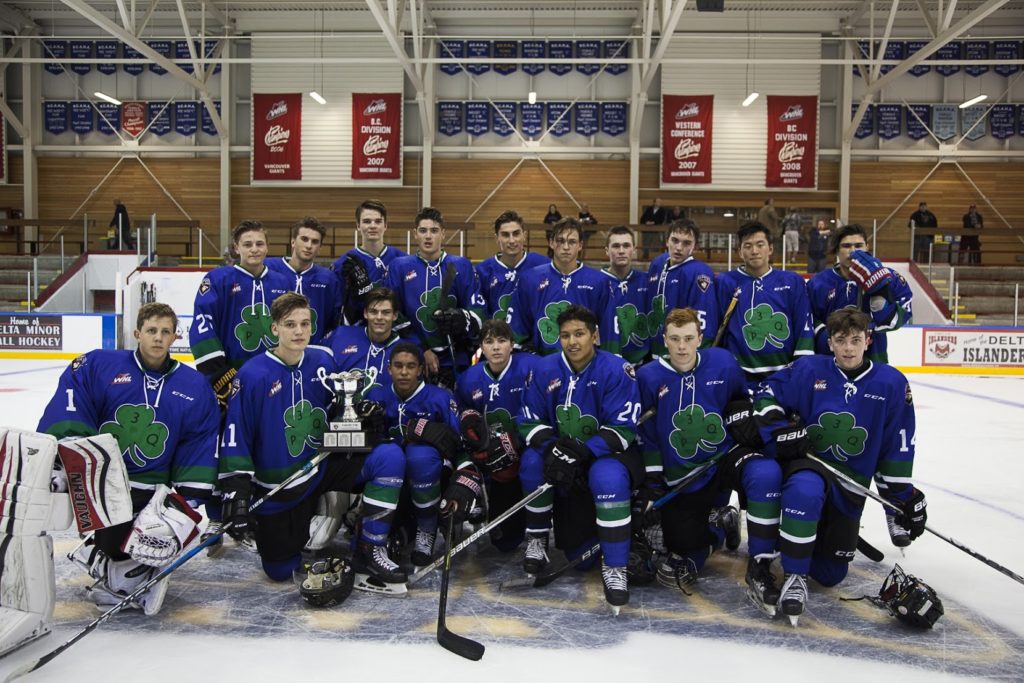 The incredibly bright and promising future for the Vancouver Giants was on full display Sunday afternoon at the Ladner Leisure Centre. Justin Sourdif and Tyler Ho each scored twice for Team Quinn in an 8-5 victory over Team Howe. Alec Saretzky responded with two goals for Howe while Import forward Milos Roman added a goal and an assist.

The first 16 minutes of the first period yielded no offense, but it wasn’t for a lack of chances. Starting goaltenders Trent Miner (Howe) and Jacob Wassermann (Quinn) were marvelous for their respective teams with both goaltenders making timely saves. The offense though would come fast and furious in the later stages of the first.

Justin Sourdif got the goal scoring started at the 16:08 mark. The third overall pick in the 2017 draft put Quinn on the board when he snuck the puck past Trent Miner from in close. Assists on the goal were credited to Haydn Delorme and Jared Twerdoclib.

A minute and 57 seconds later Quinn added to their lead when 2000-born forward Tyler Ho converted off a Parker Johnson feed. Ho, who was acquired by the Giants at the trade deadline in 2017 (In a trade with Prince George) appeared in seven games for the Giants last season.

HOOOO YES HE CAN!@TylerHo19 makes it 2-0 Quinn! Parker Johnson with the lone helper.

39 seconds later Howe responded when Alec Saretzky snuck a low shot through Jacob Wassermann and home off the rush. The lone assist on the play was awarded to Evan Patrician.

With time winding down in the first, Cyle McNabb had a phenomenal chance to further extend Quinn’s lead – But Trent Miner made a sprawling save, denying McNabb point blank with 1.3 seconds remaining to keep it at a one goal game.

Early in the second Team Howe evened the score when 1999-born Zach Cox stuffed home an Aidan Barfoot rebound past Jacob Wassermann to tie the score.

58 seconds later Justin Sourdif got Quinn right back on top when he potted his second of the game. Kaleb Bulych drew the lone helper.

Quinn would then regain their two-goal cushion at the 7:56 mark of the second when Haydn Delorme beat Trent Miner on a breakaway. Delorme’s goal came on the power play and was assisted by Hayden Tuba.

Halfway through the period both teams made a change in goal. In came Brett Murphy for Quinn and Braedy Euerby for Howe. Both were flawless in the final 10 minutes of the second, and Quinn took a 4-2 lead into the second intermission. Shots on goal were 11-6 for Howe in the period and 28-19 for Howe through two.

Team Howe exploded out of the gate in the third period, grabbing a goal just 15 seconds in. The Giants 2017 first round Import Draft selection Milos Roman followed up his own rebound along the left wing and wired his shot past Brett Murphy to make the game 4-3.

Milos Roman buries one just 15 seconds into the third period to move Howe back within one. 4-3 Quinn leads early 3rd.

That’s as close as Howe would get though as Team Quinn would answer with two more of their own. First it was Tyler Ho who notched his second of the afternoon at 5:52 (Tanner Brown had the lone helper). Then John Little got in on the act at 8:30 off a pass from linemate Krz Plummer.

Each team would add two goals in the later stages of the game. Bowen Byram struck for Team Howe at the 16:33 mark to make it 6-4, but Connor Wetsch (17:40) and Parker Johnson (18:55) responded for Team Quinn. The final goal of the game came with 12 seconds left and it came off the stick of Alec Saretzky who finished with two of Howe’s five goals.

The aftermath of this afternoon's Quinn/Howe Legend's Cup Game. pic.twitter.com/5TbXtPmKNY

From here, the Vancouver Giants staff will assemble their preseason roster in time for Friday’s exhibition opener. The G-Men take the ice for the first of six preseason games on Friday, September 1st against the Seattle Thunderbirds at 11:30 AM. That game will take place in Everett as part of a weekend preseason tournament

The Vancouver Giants would like to thank every fan who spent their Sunday afternoon with us at the Ladner Leisure Centre. We also want to thank the Delta chapter of Kidsport who accepted donations prior to today’s game. The Vancouver Giants first home preseason game will take place on Friday, September 8th against the Prince George Cougars. That game will take place at the Langley Event’s Centre as part of a four-team preseason tournament.