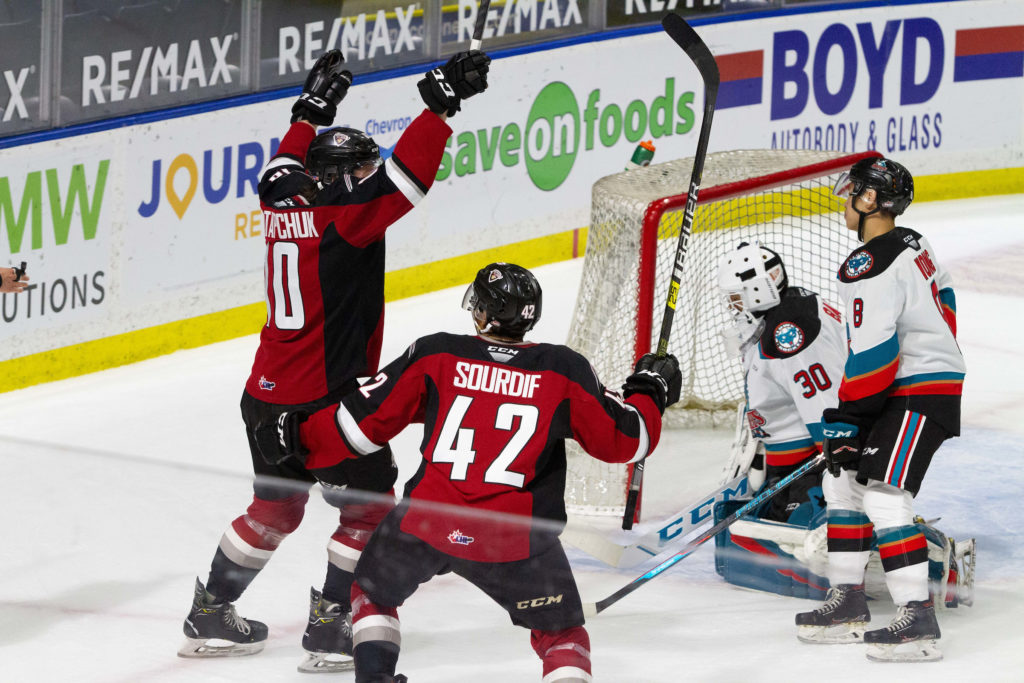 Tonight from the RE/MAX Hub in Kamloops, the Vancouver Giants enter their final weekend of play in the 2020-21 season. This evening they’ll begin a stretch of two games in two nights when they battle the Kelowna Rockets for the fourth and final time. The Giants are coming off back-to-back losses to the Prince George Cougars, and are looking to go out on a high note with just three games left in their season.

Last Game: A 2-1 loss to the Prince George Cougars on Tuesday night at home.

WEEKLY HONOURS FOR KOPE AND LEE

Forward David Kope was named to the RE/MAX Hub Team of the Week for a second straight week. The 20-year-old comes into tonight with a team-leading 14 points (5G, 9A). In his past nine games, Kope has produced five goals and eight assists for 13 points. The Giants, to their credit have managed to keep David Kope quiet, as he’s managed just one assist in three games against the Giants.  Defenceman Jake Lee earned also earned a spot on the team after posting four points (1G, 3A) in four games. Both of Jake Lee’s goals this season have come against the Giants. Coming into tonight he’s got two goals and six assists for eight points with a +9 rating.

After tonight, the Rockets have three games left on their schedule. They’ll take on Prince George on Sunday in Kamloops. They’ll then play their final games at home, facing Kamloops on Monday and Victoria next Wednesday. Coming into tonight the Rockets have a points percentage of 1.41 while the division leading Kamloops Blazers have a 1.57. Victories are going to be very important for Kelowna down the stretch of this hub season.

Last Game: A 3-0 loss on Wednesday to the Prince George Cougars

20-year-old forward Eric Florchuk is entering the final weekend of his WHL career. Originally selected 13th overall by the Victoria Royals in 2015, Florchuk has since gone on to 267 career WHL games with Victoria, Saskatoon and Vancouver. The Giants acquired Eric Florchuk at the 2020 WHL Trade Deadline and his impact has been felt positively ever since. In 25 games with Vancouver last season, Florchuk posted 10 goals and 23 assists for 33 points. This season he’s followed up with 17 points in 19 games. Tonight he’ll skate on a line with Justin Sourdif and Tristen Nielsen as the Giants look to discover some of their offensive fire power that was prevalent earlier in the season.

Following tonight’s game the Vancouver Giants have two home games remaining on their schedule. Tomorrow night at 7:00 PM they’ll clash with the Kamloops Blazers and then on Tuesday, May 11th the Giants will wrap up their RE/MAX Hub season against the Victoria Royals. The Giants are 2-3 against Kamloops and are 5-0 against Victoria.