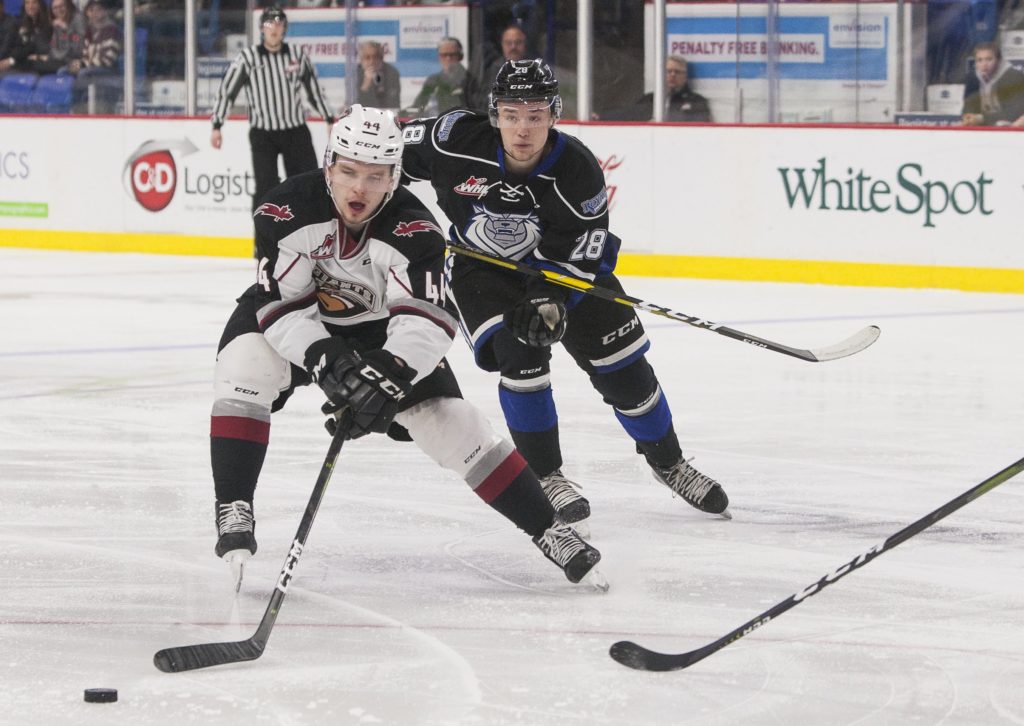 Tonight at the Langley Events Centre, the Vancouver Giants kick off a busy weekend with a home showdown with the Victoria Royals. The Giants enter the weekend seven points back of Kelowna for third place in the B.C. Division, but hold two games in hand. The Royals meanwhile are rolling having dropped just one game in regulation in their past 10. Tonight marks the fifth of 10 meetings on the season between the two clubs. Be sure to arrive early so that you can watch the festivities as the Giants add Scott Bonner to the Wall of Honour.

Last Game: A 6-1 win at home Wednesday night against the Tri-City Americans.

TRACEY ARRIVES WITH A BANG:

The Victoria Royals made an enormous splash in the days leading up to the 2020 WHL Trade Deadline when they acquired 2001-born forward Brayden Tracey from the Moose Jaw Warriors. Tracey, a first-round signed prospect of the Anaheim Ducks joined the Royals after posting 121 career points in 99 regular season games with the Moose Jaw Warriors. Tracey made an immediate impact with his new team. On Friday January 10th, Tracey scored the overtime winner for the Royals at home against the Portland Winterhawks. He has since recorded points in each of the next three games, and has managed two goals and four assists for six points in his first four games as a Royal. Altogether he’s posted 17 goals and 27 assists for 44 points in 32 games this season.

For a third time this season Royals goaltender Shane Farkas earned Goaltender of the Week Honours for the week ending on January 12th. Farkas has earned an 18-7-1-0 record with a 2.11 goals-against-average and a .932 save percentage along with two shutouts this season. , and two shutouts in 27 games as part of a superb overage season. For his career against the Vancouver Giants, Farkas has compiled a record of 7-1 with two shutouts. He’s 2-1 against them this season with a 1.01 goals-against average and a. 965 save percentage.

Last Game: A 6-3 loss at home on Saturday to Spokane.

The Vancouver Giants will get a major boost tonight when Colorado Avalanche prospect Bowen Byram returns to their lineup. The 2001-born defenceman from Cranbrook, B.C. will play his first game with the Giants since December 8th. It’s not like Byram hasn’t been busy though. Byram was one of six WHL players who helped Team Canada capture Gold at the 2020 IIHF World Juniors in the Czech Republic. Byram was the fifth Giants player to ever represent Canada at the World Juniors and was the first to capture a Gold Medal with Canada since Evander Kane in 2009.

Giants forward Tristen Nielsen brings a four-game goal scoring streak into tonight’s game with Victoria. The product of Fort St. John, B.C. has reached the 20-goal mark for the first time in his WHL career and he’s already four points ahead of his previous season high for points. Over the course of his past 16 games, Nielsen has notched 10 goals along with nine assists for 19 points. In four games against the Royals this season, Nielsen has managed one assist.