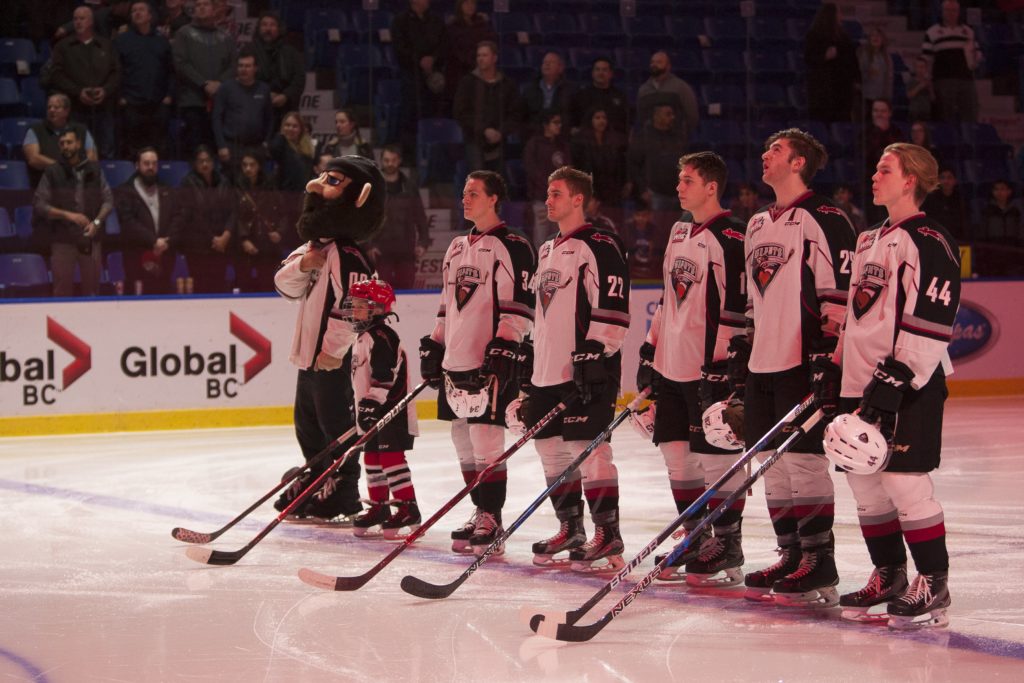 Tonight at the Langley Events Centre, the Vancouver Giants and Victoria Royals meet for a crucial Game 4 matchup. There’s lots on the line for both sides. A win for the Giants gives them a 3-1 stranglehold and moves them one win away from a berth in the second round. A win for the Victoria Royals evens the series and gives them home ice advantage back with the series then becoming a best-of-three.

Noah Gregor: The San Jose prospect has scored in each of the past two games and is tied for the team lead in playoff scoring with three points. Gregor had 65 points through 60 games in the regular season and had a goal and two assists in five games against the Giants as a member of the Royals.

Tyler Soy?: Will he play? The Victoria Royals all-time leading scorer hasn’t played a game yet in the series. He’s travelled to Langley with the team and has skated over the past few days. His return seems imminent. What a boost it would be for the Royals to get him back. He has 92 points in 66 games including three goals and five assists for eight points in eight games against the Giants.

Jared Freadrich: The 19-year-old has a goal and two assists through three games in the series which leads all Royals. Offensively he’s contributed on both Victoria power play goals in the series all while playing solid defense on the other side of the ice.

Chaz Reddekopp: The 20-year-old LA Kings prospect continues to provide muscle and physicality on the back-end for Victoria. He doesn’t have any points in the series but has logged big minutes in all situations. Tonight he’ll likely be tasked with shutting down the likes of Tyler Benson and Ty Ronning.

Desperation: The Royals can ill-afford to go home down three-games-to-one. The urgency and desperation has to be there tonight, and given their depth and experience, that shouldn’t be an issue.

Milos Roman: The rookie forward has scored in all three playoff games so far and dating back to the regular season he’s got goals in five straight games. Roman is tied with Tyler Benson for the team lead in scoring with five points through three games.

Tyler Benson: The Giants captain scored the game-winning goal on Tuesday and has a goal and four assist for five points so far in the series. Not only has Benson contributed offensively but he’s been strong defensively to the tune of a +2 rating.

Brennan Riddle: The 20-year-old has a goal and three assists so far in the series and leads all Giants with a +5 rating. Tonight will be a challenge for Riddle as his usual defense partner Matt Barberis is serving a one-game suspension.

Bowen Byram: The WHL’s Western Conference Rookie of the Year nominee had a goal in Game 3 and has now two points through three games in the series. With both Darian Skeoch and Matt Barberis missing from the Giants lineup tonight, even more of an onus will be on Byram to step up and log big minutes.

David Tendeck: The all-star returned to the Giants net in Game 3 and made 35 saves on 36 shots faced to earn first-star honors. Tendeck was a huge reason for the Giants victory in Game 3 and tonight he’ll look to bring more of the same as the Giants take aim at a 3-1 series lead.

Ty Ronning: With four assists through three games, Ty Ronning has been a big factor offensively but has done so without scoring a goal. Having scored 61 during the regular season, it’s a matter of ‘when’ not ‘if’ he finds the back of the net.