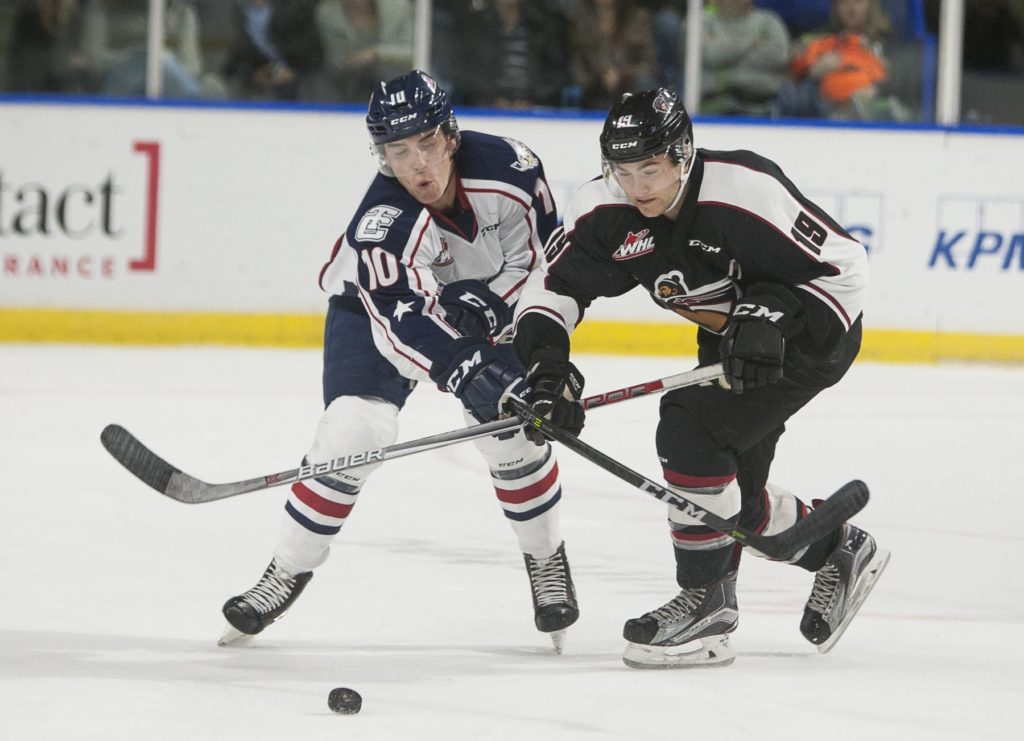 It’s back to Everett, WA this morning for the Vancouver Giants who will take the ice today for the third time in as many days. So far, so good for the Giants who have rattled off pre-season victories against Seattle and Spokane respectively. Standing in their way today: The Tri-City Americans.

Nolan Yaremko: The 20-year-old was named a co-captain of the Ams last month and deservingly so after he posted a new season high of 22 goals and 34 assists for 56 points. Yaremko was picked 29th overall by Tri-City in the 2013 WHL Bantam Draft.

Sasha Mutala: The sophomore forward was a teammate of Bowen Byram’s at the 2018 Hlinka Gretzky Cup. Through 68 games last season, Mutala posted 11 goals and 15 assists for 26 points. He’s poised to obliterate those totals in 2018-19.

Anthony Bishop: The 20-year-old Kelowna product was a savvy acquisition last season. In 62 games with the Ams he posted 15 assists, but more importantly he provided the team with some important defensive depth. He’s vying for a permanent 20-year-old spot on this year’s club.

Marc Lajoie: The under-ager was selected 14th overall by the Ams in the 2018 WHL Bantam Draft. During his final season of Bantam, Lajoie struck 10 times while adding 20 assists for 30 points. He’s already 6’3” and 205 pounds.

Beck Warm: The 19-year-old from Whistler, B.C. comes into this season as the defacto number one netminder for Tri-City. Last season he went 16-11-1-1 with an .889 save percentage and a 3.58 goals-against-average.

Kyle Olson: The Anaheim Ducks prospect will look to bounce back this season after appearing in only 36 games a season ago due to injury. Olson did manage to appear in 10 playoff games, but a healthy and productive 19-year-old season is hopefully in the cards for Olson.

Brayden Watts: The 19-year-old California native led the Giants attack with two goals yesterday, including the overtime winner. Watts is back in the lineup today and will be looking to build off yesterday’s positive showing.

Davis Koch: Up front the 20-year-old returns to the Giants lineup for today’s game. Of all players suting up today for Vancouver, Koch had the most points a season ago with 58.

Dylan Plouffe: The veteran 19-year-old logged major minutes yesterday for the G-Men and will likely be asked to do so again today given that the blueline will be far younger. He had nine goals and 31 assists for 40 points in 2017-18.

Bailey Dhaliwal: The 19-year-old only dressed in seven games last season because of injury, but so far he’s shown no ill-effects. Dhaliwal brings noticeable size and toughness to the Vancouver Giants lineup – And they’ll need it against a Tri-City club that is historically big and bruising.

David Tendeck: Arizona Coyotes prospect David Tendeck will get the nod today for the Giants. The reigning all-star has yet to make an appearance this weekend, so you can bet that the guys in front of him will be playing with all the more confidence knowing he’s back there.

Energy: Both the Giants and the Ams are playing in their third game in a span of three days, so the team that wins today will likely be the team that manages their energy and shift-length the best. If the Giants can play most of today’s game at five-on-five or better, they’ll give themselves every positive opportunity possible to garner their third win of the weekend.