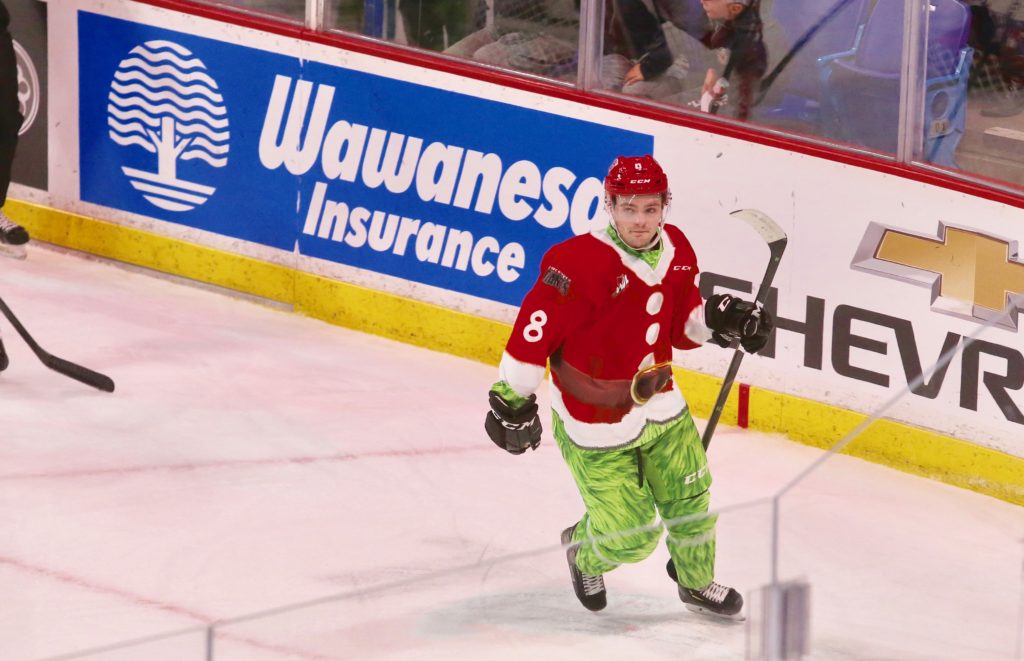 Tonight at Rogers Arena the new look Vancouver Giants take to the NHL ice in the heart of Downtown Vancouver against their Western Conference rivals, the Tri-City Americans. Tonight’s game marks the third meeting of the season between the two clubs, and the first on home soil for the Giants. Tonight the Giants will look to snap a three-game losing streak while the Tri-City Americans are looking to avenge a 4-3 loss suffered last night in Spokane.

The goaltending tandem of Beck Warm and Talyn Boyko has been a huge bright spot this season for the Tri-City Americans. Last night the veteran Warm faced 50 Spokane shots, and stopped 46 of them, albeit in a losing cause. For the season, Warm has put together a record of 8-11-1-1 with a 3.12 goals-against-average and a .918 save percentage. The younger Boyko is 1-0 this season against Vancouver and is 4-0-1-0 for the season with a 2.37 goals-against-average and a .947 save percentage.

The Vancouver Giants will need to be weary of 2000-born forward Nick Bowman. The 2000-born product of Sherwood Park, AB has scored in each of his past two games, and has three points in that span. In two games against the Giants, Bowman has collected three goals to lead all Tri-City Americans. In just 24 games this season, Bowman has already matched his previous season high for points (14) with seven goals and seven assists.

Last Game: A 2-1 loss at home on Friday night against the Spokane Chiefs.

Yesterday the Giants completed a blockbuster trade with the Medicine Hat Tigers. The Vancouver Giants acquired 1999-born forward Tyler Preziuso (Victoria, BC), 2000-born defenceman Trevor Longo (North Vancouver, BC), a 2020 first-round draft pick and a conditional fifth-round draft pick in 2021 from the Medicine Hat Tigers. In return the Vancouver Giants traded 1999-born defenceman Dylan Plouffe, 2001-born forward Lukas Svejkovsky, a 2020 third-round pick and a conditional 2021 third-round pick back to Medicine Hat. Tyler Preziuso was originally selected by the Medicine Hat Tigers in the third round (61st overall) in the 2014 WHL Bantam Draft. Since then he’s appeared in 293 career regular season games for the Tigers and has scored 55 goals along with 83 assists for 138 points. Trevor Longo checks in at 6’3” and 200 pounds. He was selected by the Tigers in the sixth-round (128th overall) in the 2015 WHL Bantam Draft. In 110 career games with the Tigers he’s managed nine goals and 18 assists for 27 points. Both Preziuso (#14) and Longo (#2) will make their Vancouver Giants debuts tonight at Rogers Arena.

Giants defenceman Bowen Byram is looking to become the three-time reigning Teddy Bear goal scorer for the Vancouver Giants. The Colorado Avalanche prospect has scored the famed Teddy Bear goal in each of the previous two seasons for the G-Men. So far he’s the only Giant to ever score two Teddy Bear Goals. Other notable Teddy Bear goal scorers include: Ty Ronning (2015), Brett Kulak (2011), Craig Cunningham (2009). Tim Kraus scored his on a penalty shot in 2006.

*All stuffed toys thrown onto the ice during tonight’s Teddy Bear Toss game will be gathered and donated to the Lower Mainland Christmas Bureau!