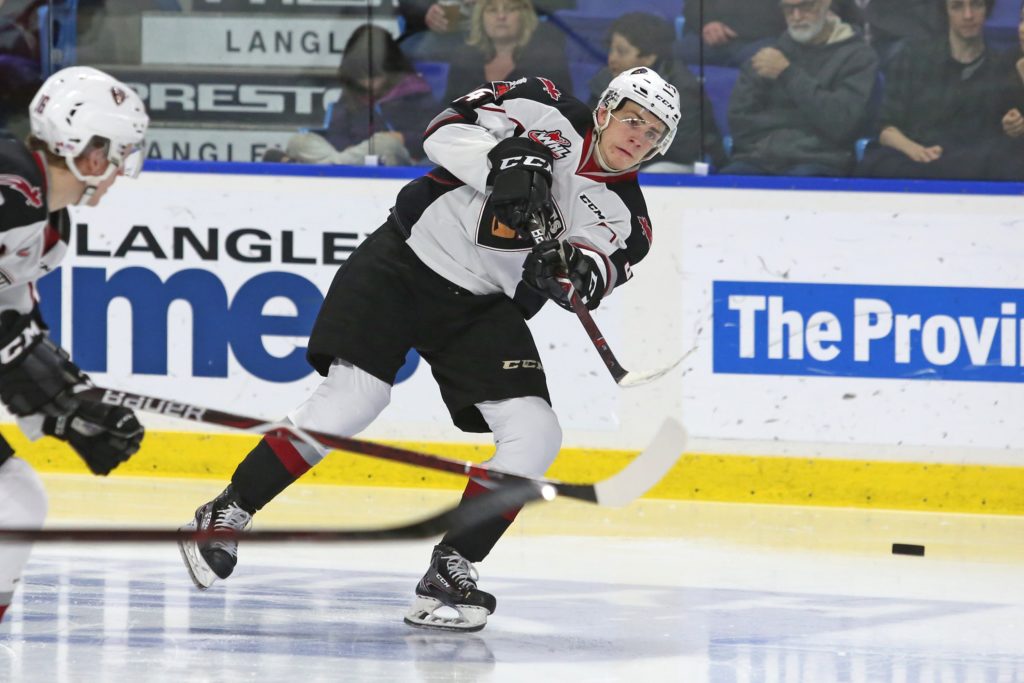 Tonight at the Langley Events Centre the Vancouver Giants take aim at their third straight home-ice victory. Through their first 10 games the Giants have only one regulation loss, and have gone seven straight games without a regulation loss. The Giants are coming off a weekend that saw them earn five of six available points, and tonight they’ll look to continue their winning ways when they clash with the defending league champs, the Swift Current Broncos.

Last Game: A 3-2 shootout victory Saturday in Brandon against the Wheat Kings

Alec Zawatsky: The 1999-born product of Yorkton, SK leads all Broncos with four goals and  three assists for seven points. Zawatsky was never drafted into the WHL but is enjoying a strong start to his second full season in the league. Last season with the Saskatoon Blades, he netted three goals and added five assists for eight points.

Andrew Fyten: The 20-year-old is a veteran of 190 career WHL games with Swift Current and Calgary. Coming into tonight, he’s struck twice while adding three assists for five points. Fyten played in 25 playoff games for the Broncos and chipped in with two goals and four assists for six points as the Broncos went on to secure the 2018 Ed Chynoweth Cup.

Connor Horning: Selected by the Broncos in the third round of the 2016 WHL Bantam Draft, Horning is enjoying a strong offensive start to his second season as a Bronco. Last season, Horning appeared in 50 games for Swift Current and posted three goals and four assists for seven points. He’s 6’3” and 198 pounds.

Noah King: 19-year-old Noah King is one of the elder statesmen on the Bronco blueline. He dressed in 65 games for the Broncos a season ago and notched five assists and 29 penalty minutes. He appeared in all 26 of the Broncos playoff games last season and provided a goal, a +4 rating and four penalty minutes,

Joel Hofer: The 2000-born goaltender was the first WHL netminder selected in the 2018 NHL Draft. Hofer was never drafted into the WHL but last season he joined the Broncos as a rookie and went 8-3-1-1 with a shutout, a .914 save percentage and a 2.61 goals-against-average. Hofer made 53 saves on Saturday in Brandon in what resulted as a 3-2 shootout win for the Broncos.

Max Patterson: The 1999-born forward leads the Broncos with 207 career WHL games played. The rugged forward suited up in 72 games last season for Swift Current and contributed nine goals and 15 assists for 24 points. He added five goals and two helpers in 26 playoff games. He’s 6’5” and 202 pounds and is hard to miss out there.

Last Game: A 3-2 win on the road Sunday afternoon in Victoria

Milos Roman: The 1999-born prospect of the Calgary Flames is riding a seven-game point streak. During that span, Roman has scored five goals while adding four assists for nine points. He’s registered at least a goal in each of his past four games. He had two goals on Sunday in the Giants 3-2 win in Victoria.

Brayden Watts: The 1999-born Californian has three goals and seven assists for 10 points through 10 games. Despite going scoreless in his first three games, Watts has since responded with all 10 of those points in a seven-game span. Watts had the game winning goal and an assist in Sunday’s win in Victoria.

Dylan Plouffe: The 19-year-old Sherwood Park, AB native had an assist in Sunday’s win against the Royals and is tied with Bowen Byram for the team in lead in scoring among defencemen. Plouffe leads all Giants defencemen with a +5 rating.

Bowen Byram: Over his past four games, Bowen Byram has notched a goal and three assists for four points. Byram’s two goals and four assists has him tied with Dylan Plouffe for the team lead in scoring among defencemen. His two goals are tops among all Giants blueliners.

David Tendeck: The Arizona Coyotes prospect is tied for third in the WHL in wins with six. He’s coming off an 18 save 3-2 victory over the Victoria Royals on Sunday. For the season, Tendeck is 6-1-1-0 with a shutout, a 1.95 goals-against-average and a .923 save percentage. Tendeck has gone five straight starts without a regulation loss.

Maintain the Urgency: The Vancouver Giants were full marks Sunday in their 3-2 win over the Royals. They outshot the Royals 40-20, controlled most of the game in all areas of the ice, and did so despite playing their third game in a span of three days. Tonight’s game will mark the fourth game in five days for Michael Dyck’s team so urgency, and smart use of their energy will be major keys once again to their success.