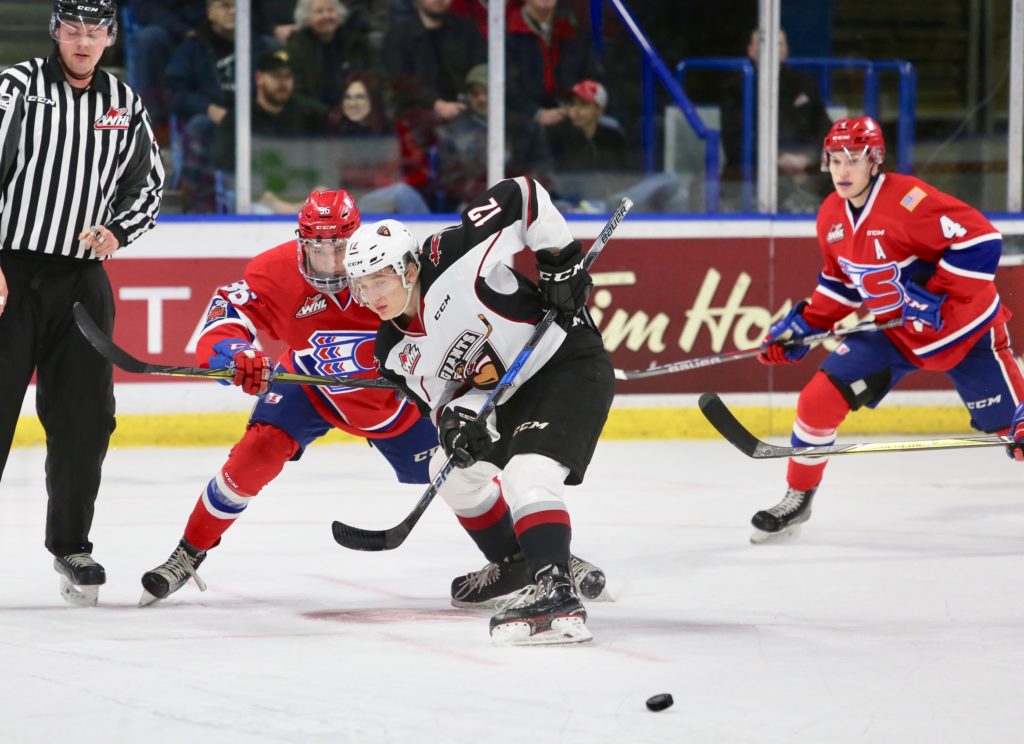 This afternoon in Everett, WA the Vancouver Giants are back in pre-season action when they take the ice against the Spokane Chiefs. Yesterday the G-Men skated to a 4-2 victory over the Seattle Thunderbirds while the Chiefs were full marks in a 7-1 victory over the Portland Winterhawks.

Luke Toporowski: The sophomore forward had 10 goals and 13 assists for 23 points in his rookie season, and is coming off a busy summer where he represented Team USA at the 2018 Hlinka Gretzky Cup. He’s eligible for the 2019 NHL Draft.

Ty Smith: The first WHL player selected in the 2018 NHL Draft was Ty Smith. He went 17th overall to the New Jersey Devils after posting 14 goals and 59 assists for 73 points. He was the first overall selection in the 2015 WHL Bantam Draft.

Nolan Reid: 20-year-old Nolan Reid is coming off his career best season offensively. The Deer Valley, SK native struck for 14 goals and 22 assists and suited up in all 72 games for the Chiefs.

Dawson Weatherill: The 19-year-old is coming off a strong season where he posted a 26-12-3-3 record with a 3.09 goals-against-average and an .893 save percentage. 82 of his 87 career regular season games have been played in a Chiefs uniform.

Depth: Heading into 2018-19 the Spokane Chiefs should be very happy with their overall depth. There’s no shortage of size, speed, skill, and experience coming back and assuming they can remain healthy, they should be in the mix for a US Division crown.

Cyle McNabb: The 18-year-old forward had two goals in yesterday’s victory for the Giants. With a younger lineup set to take the ice today against Spokane, another strong performance from McNabb would be a positive for the G-Men.

Owen Hardy: The veteran power forward will make his pre-season debut today for the Giants. The Nanaimo, B.C. native is set to join the Vancouver Canucks next week for their Young Stars Classic tournament in Penticton and getting a game or two in the WHL under his belt beforehand should serve him well.

Bowen Byram: The sophomore d-man from Cranbrook, B.C. makes his pre-season debut this afternoon for the Giants. Byram was the Western Conference rookie of the year nominee for the WHL in 2017-18 and is eligible for the 2018 NHL Draft.

Dylan Plouffe: The 19-year-old is coming off his best season in a Giants uniform. The Sherwood Park, AB native had nine goals and 31 assists for 40 points and was named Defenceman Of the Year for the Giants in the process.

Braedy Euerby: The 16-year-old Ladner, B.C. native will get the nod today for the Giants as he looks to make his mark between the pipes. Goaltending has been a major point of strength for the G-Men from Day 1 of Training Camp onwards and today Euerby will look to continue that trend.

Milos Roman: The Calgary Flames prospect struck twice yesterday for the Giants in their victory over Seattle and he will once again take the ice today. Roman’s leadership and two-way play will be important given the younger group of forwards suiting up today for Michael Dyck’s club.