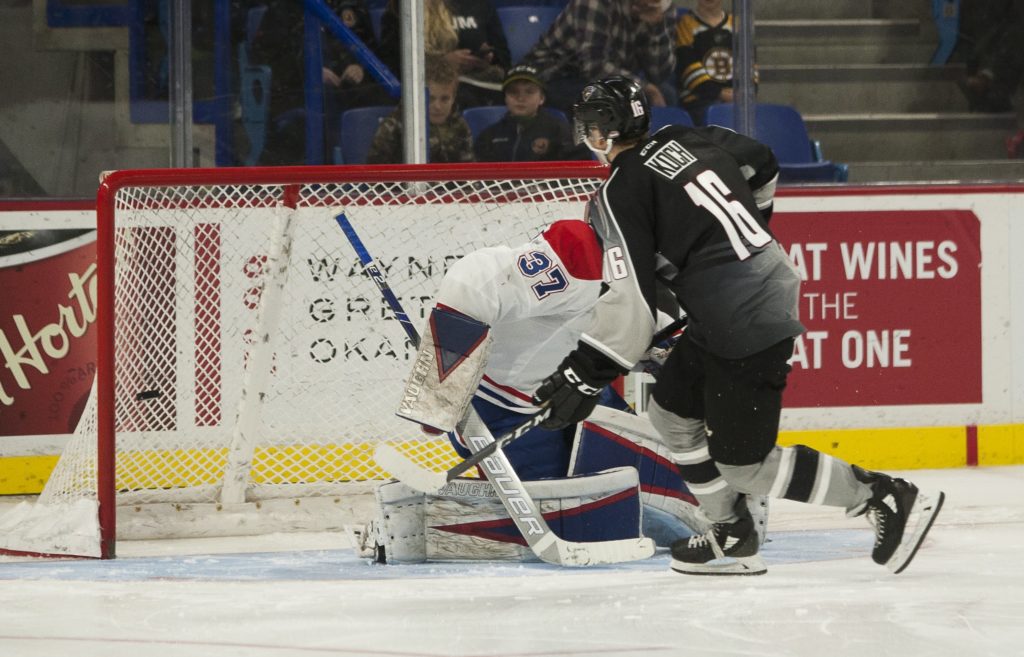 Tonight at the LEC the Vancouver Giants kick off a stretch of three games in a span of four days when they host the Spokane Chiefs for the second time this season. The G-Men and the Chiefs are two of the hottest teams going. The Giants bring a five-game winning streak into tonight’s contest while the Chiefs have won four straight. The Giants have just one regulation loss in their past 16 games while the Chiefs are 6-0-0-1 in their last seven games. So far this season the Giants are 2-0 against Spokane and are 1-0 against them at the LEC.

Last Game: A 4-3 overtime win at home on Tuesday against Red Deer.

Earlier this week at home, defenceman Ty Smith notched the overtime winner for the Chiefs as they secured a win over Red Deer. Smith comes into tonight’s game riding a four-game point streak. During that span he’s scored twice and added five assists for seven points. Ty Smith is one of just two defencemen in the entire WHL to lead his team in scoring. The first round pick of the New Jersey Devils in 2018 comes into tonight’s game with six goals and 52 assists for 58 points. Only Saskatoon’s Dawson Davidson has recorded more points (64). Smith has been especially potent on the power play having registered five goals and 21 assists for 26 points. it’s no coincidence that the Chiefs boast the league’s top power play. Smith was the first WHL player selected in the 2018 NHL Draft and was one of two Chiefs to represent Canada at the 2019 World Juniors in Vancouver.

For whatever reason, Luc Smith loves playing the Giants. The 20-year-old has recorded four goals and one assist for five points in just three games against the Giants so far this season. Dating back to last season when Smith suited up eight times for the Kamloops Blazers, Smith has notched nine goals and six assists for 15 points through 11 games. This season Smith has compiled a season high 23 goals along with 42 points. He’s three points shy of reaching a new season high for points.

Last Game: A 4-1 home ice victory over the Prince George Cougars on Sunday

All season long, Giants overage forward Davis Koch has had a flair for the dramatic. Such was the case on Sunday, February 10th against Prince George. With the score tied 1-1 in the third period, Koch registered his team-leading 22nd goal of the season on a power play to give his team the lead in what would end up as a 4-1 win for the Giants. For Koch it was his team-leading seventh game-winning goal of the season. Coming into this weekend Koch leads all Giants with 56 points. Since January 6th (a span of 16 games), Koch has registered 11 goals and 12 assists for 23 points. During that span he’s managed seven multi-point games. Koch and the Giants come into action tonight looking for their sixth consecutive victory and their third straight victory against the Spokane Chiefs. In two games against Spokane this season, Koch has compiled one goal and one assist for two points.

ONE WIN EQUALS HOME ICE IN ROUND 1:

If the Vancouver Giants win tonight, they’d guarantee themselves home ice advantage in Round 1 of the Playoffs. With 38 wins and 79 points, the Giants would hold the victory ‘tie-breaker’ over the Kelowna Rockets, who even if they won all 14 of their remaining games, they’d arrive at just 37 wins and 79 points. It would mark the first time since the 2011-12 season that the Giants would have started the playoffs at home.