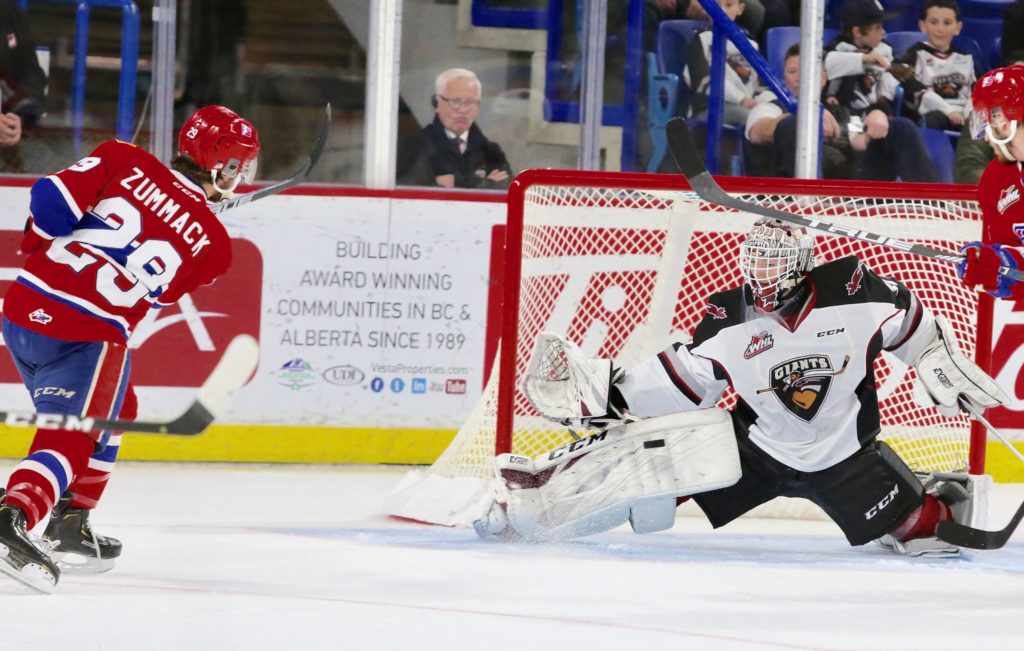 The Vancouver Giants are one victory away from a trip to the Western Hockey League finals. A win tonight for the Giants at home against the Spokane Chiefs would help them advance to the finals for the first time since 2007. The Giants have put themselves in this position thanks to a 4-3 overtime victory in Game 4 of their series with the Spokane Chiefs on Wednesday night down South. They lead the series 3-1. Simply put: A loss for Spokane and there’s no tomorrow. A win for the visitors would move Game 6 back to Spokane for Monday night at 7:05 PM.

Adam Beckman is following up a phenomenal regular season with a terrific playoff. The 2001-born product from Saskatoon, SK leads all Chiefs skaters with eight goals so far in the playoffs. This comes after he led the team with 32 goals in the regular season. Three of Beckman’s eight goals in the playoffs have come in this series against the Giants. On Wednesday night in Spokane, Beckman scored the first two goals of the game to help propel the Chiefs to a two-goal lead. He’s got an even plus-minus for the series and has registered 14 shots through four games. Beckman’s great season has certainly captured the attention of NHL scouts. Beckman was recently ranked as the #34 skater on North America’s Final NHL Central Scouting rankings list. He finished with 62 points through 68 games in his rookie WHL campaign.

FAST STARTS HAVE BEEN KEY:

The Vancouver Giants find themselves one win away from a trip to the WHL Finals and Dawson Holt is a major reason why. The 1999-born forward from Saskatoon, SK is the reigning WHL On the Run Player of the Week after posting two goals and two assists for four points in two games played last week. But as impressive as las week was, his biggest contribution so far in the playoffs came two nights ago in Spokane. With the score tied 3-3 Holt delivered the overtime winner for the Giants at the 7:07 mark giving the Giants a come-from-behind victory in a game that they at one point trailed 2-0. Holt now has five goals and seven assists for 12 points through 14 playoff games and a +10 rating. Two of his goals have been game-winners. Holt and his linemates Jared Dmytriw and Owen Hardy have now combined for 16 goals and 35 points during the 2019 WHL Playoffs.