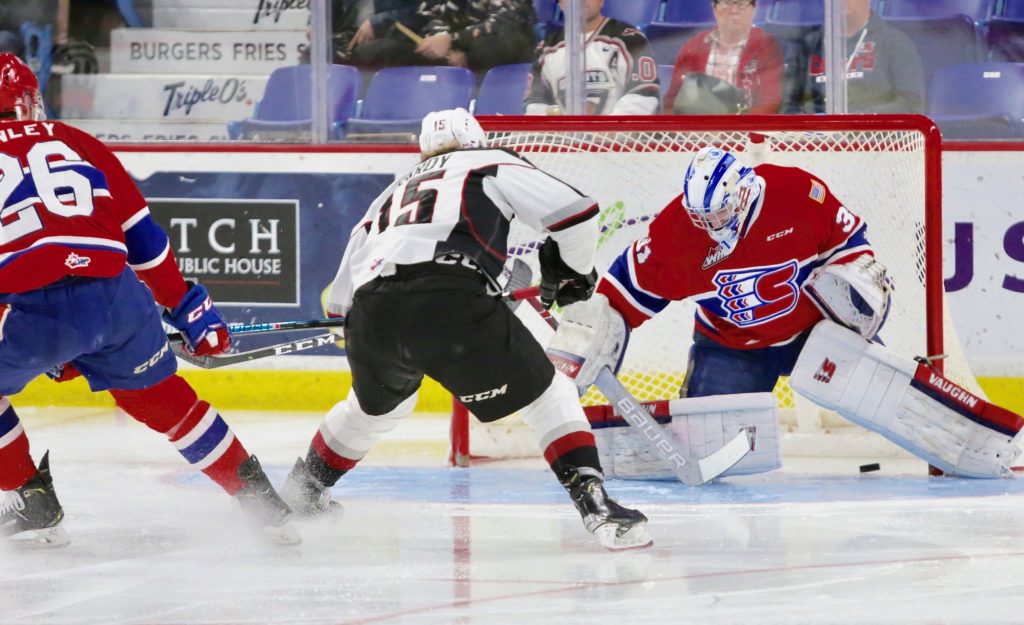 Tonight at the LEC the Vancouver Giants and Spokane Chiefs take to the ice for Game #2 of the Western Conference Championship Series. Last night the Giants took a 1-0 series lead thanks to a 4-1 victory. Owen Hardy led the charge offensively with a goal and two assists while David Tendeck did his part in goal making 30 saves. For the Giants it marked their seventh straight victory in the playoffs while the Chiefs suffered their first road playoff loss of 2019. A win for the Giants would help them retain home ice advantage in the series which will then to Spokane for Games 3 and 4 next week on Tuesday and Wednesday. A split for Spokane would be massive as they would then steal home ice advantage from the Giants.

In the minds of many, 2001-born forward Adam Beckman deserves 2019 WHL Rookie of the Year honours. The Saskatoon, SK native has followed up a wonderful rookie campaign in the WHL with an equally impressive playoff push.  Beckman posted 32 goals and 30 assists during the regular season and so far has managed six goals and four assists for 10 points through 11 playoff games. Beckman had the lone goal last night for the Chiefs in their 4-1 setback against the Giants, but even during the regular season Beckman was a pest against Vancouver. He had two goals and two assists for four points in four meetings with the Giants. Beckman is definitely on the radar of NHL scouts as he was recently ranked #34 on NHL Central Scouting’s final draft ranking’s list for North American skaters. Not bad for a player who made the jump to the WHL directly from Midget after spending last season the Battlefords AAA Stars in the SMHL.

The Spokane Chiefs played most of Game 1 with just 17 skaters as 20-year-old Luc Smith left the game early in the first period with a lower body injury and did not return. Smith’s status for tonight is unknown at this time, but there’s no denying how important Luc Smith is to the Spokane Chiefs attack. During the season Smith had 28 goals and 53 points in 64 games. Six of those 28 goals came against the Vancouver Giants.

WHEN THE GOING GETS ‘HARD’:

Owen Hardy is making his mark on the 2019 WHL Playoffs. The 1999-born forward from Nanaimo, B.C. led the charge last night for the Giants with a goal and two assists in Game 1 of their Western Conference Championship series with the Spokane Chiefs. Hardy picked up right where he left off from Round 2. Hardy has now scored in three straight games and over the course of those three games has registered four goals and three assists for seven points. Hardy and his linemates Dawson Holt and Jared Dmytriw have been logging major minutes for the Giants and have experienced a lot of recent offensive success despite being matched up against the opposing team’s top line. The trio has combined for 29 points through 11 playoff games. Hardy is tied for the team lead in plus-minus with a +12 rating and currently sits tied for fourth in team scoring during the post-season. All of Owen Hardy’s 230 career regular season WHL games have been played in a Giants uniform.

David Tendeck has found quite a groove during the 2019 WHL Playoffs. The 1999-born product of North Vancouver, B.C. has won each of his past four starts and in each of those wins has surrendered just one goal against. For the playoffs, Tendeck is 5-1 with a 1.99 goals-against-average and a .923 save percentage. Last night he made 30 saves on 31 shots faced and was named the game’s first star. The Giants have yet to announce who their starting goaltender will be for tonight’s game.