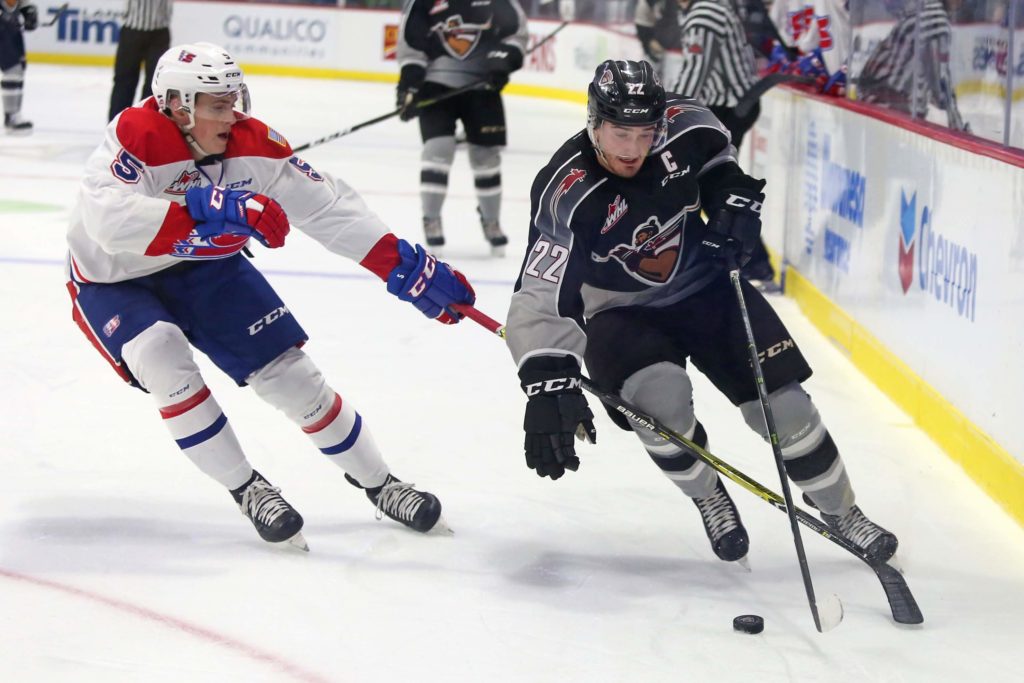 Tonight, the Langley Events Centre is set to host its largest hockey crowd of the season when the Vancouver Giants and Spokane Chiefs take the ice for Game #1 of the WHL’s Western Conference Championship Series. The Giants have won six consecutive playoff games and are hoping to use home ice to their advantage as they run into a Spokane Chiefs foe who has made short work of both the Portland Winterhawks and the Everett Silvertips on their way to this series. Both teams are healthy and both teams will be amped to get things going tonight in the Lower Mainland.

The Vancouver Giants are about to get a steady dose of Ty Smith. Smith hails from Lloydminster, AB and was the first overall selection in the 2015 WHL Bantam Draft. So far in 10 playoff games in 2019, Smith has registered one goal and seven assists for eight points. During the regular season, Smith finished with seven goals and 62 assists for 69 points which ranked him fourth in league scoring among blueliners. For his efforts, Smith was named Western Conference defenceman of the year and will find out on May 1st whether he’ll receive WHL Defenceman of the Year honours. Smith was selected 17th overall by the New Jersey Devils in the 2018 NHL Draft making him the first WHL player selected to the NHL that season. In four regular season games against the Giants in 2018-19 Smith posted four assists for four points. He represented Team Canada during the 2018-19 World Juniors in Vancouver.

Last Game: A 6-1 victory in Victoria on Thursday, April 11th to clinch the series in four games.

Vancouver Giants captain Jared Dmytriw is playing arguably the best hockey of his entire WHL career. The 1998-born forward from Craven, SK is coming off a series where he scored three times and added three assists for six points in the Giants 4-0 series sweep of the Victoria Royals. Dating back to Game 6 of Round 1 against Seattle, Dmytriw has notched four goals and three assists for seven points over the course of his past five games, all of which have been Giants victories. Through 10 playoff games, the Vancouver Giants captain has struck for four goals and five assists for nine points and is a +7 rating with 10 penalty minutes. During the regular season, Dmytriw led all Giants in scoring against the Spokane Chiefs with two goals and three assists for five points through four games. Dmytriw and his linemates Owen Hardy and Dawson Holt all featured prominently in the previous series and will once again look to do the same as they go up against the high-flying Chiefs.

Coming in at #2 for North American skaters on the NHL Central Scouting’s Final Rankings List was Giants d-man Bowen Byram. The Cranbrook product finished second in team scoring with 26 goals and 71 points in 67 games.  Byram led the entire WHL in overtime goals with six. Also cracking the list was Giants goalie, Trent Miner who was ranked at #6 among North American goaltenders. Miner had the WHL’s third best goals-against-average (1.98) and the league’s third best save percentage (.924). He earned three shutouts this season and posted an overall record of 23-5-1-1. Byram leads all WHL defencemen in playoff scoring with 13 points while Trent Miner is 4-1 in the post-season with a .915 save percentage and a 1.98 goals-against-average.