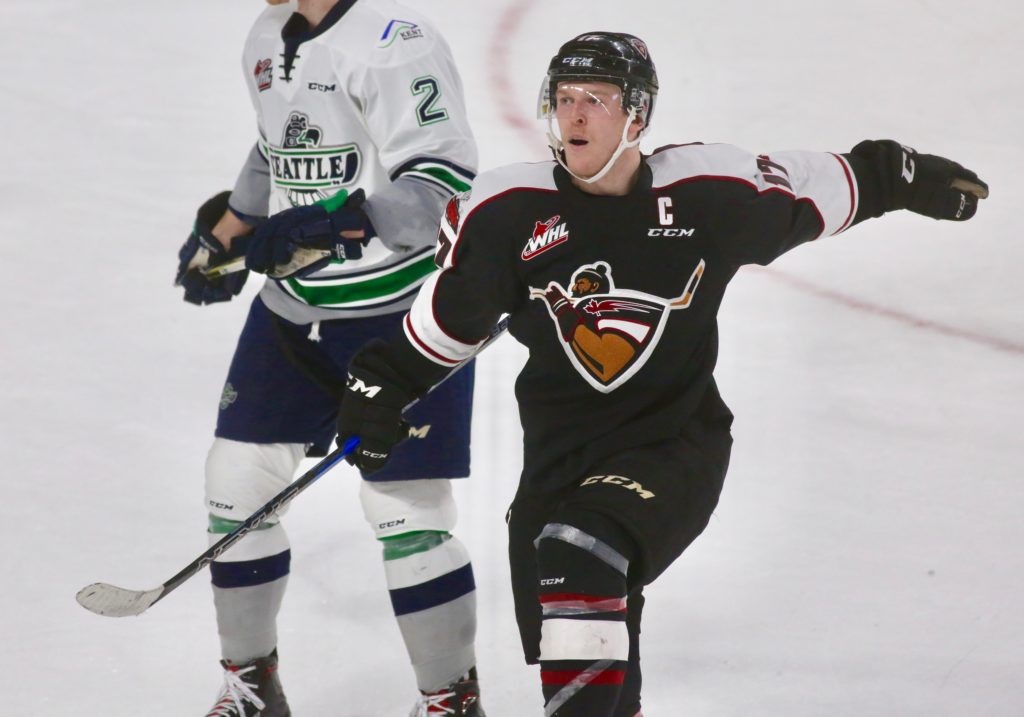 Tonight in Langley, the Vancouver Giants look to get back into the win column when they clash with the defending champs, the Seattle Thunderbirds. The Giants have won three straight at home, but are coming off a Wednesday road loss in Kelowna. Seattle is rolling having gone 7-2-1-0 in their last 10 as they find themselves right in the thick of the US Division playoff picture. Tonight’s game marks the third of four meetings on the season between the two clubs.

Nolan Volcan: The 19-year-old leads all T-Birds in goals with 25 and his 56 points ranks him second on the team behind only Donovan Neuls. In two games against the Giants he’s recorded two assists. He’s already 12 points ahead of his previous season high which he set last season.

Donovan Neuls: 20-year-old Donovan Neuls leads all T-Birds in scoring with 57 points. He’s already 16 points ahead of his previous season-high for points from a season ago. During his 264 game career in the WHL, Neuls has missed a total of four games.

Austin Strand: The Los Angeles Kings prospect leads all Seattle defenders in both goals (17) and points (46). His 17 goals ranks him third among all defencemen and his 46 points rank him 10th in the league.

Turner Ottenbreit: 20-year-old Turner Ottenbreit has had a terrific final season in the WHL with Seattle. His 32 points matches his total from a season ago but he’s on pace to set a new season-high for penalty minutes as his 88 are only four shy of his previous high of 92. He’s one of the most physically imposing defencemen in the entire WHL.

Depth: The T-Birds have 10 roster players with 30-or-more points. Conversely the Giants have five. The Thunderbirds don’t necessarily have one line or one player that can burn you, but they come at teams in waves which makes them a tough team to game-plan and defend against.

Last Game: A 4-1 road loss in Kelowna against the Rockets

Tyler Benson: The Giants captain has recorded points in each of his past five games. During that span he’s scored two goals while adding six assists. When these teams last met, Benson had the OT winner in a 4-3 come-from-behind win for the Giants on November 28th at home.

Davis Koch: Koch had the Giants lone goal on Wednesday in Kelowna and has quietly started to provide offense. He’s got two goals and two assists over his past five games. A confident and productive Davis Koch would be a huge perk for the Giants as they forge ahead in a difficult chunk of their schedule.

Brennan Riddle: The Vancouver Giants are going to be very young on the back-end for the foreseeable future, which means that 20-year-old Brennan Riddle is going to play a TON. Since joining the Giants from Lethbridge, Riddle has been steady posting four assists in 11 games with a +3 rating playing mostly against the opposing team’s top forwards.

Bowen Byram: The 16-year-old is no stranger to big minutes, but tonight he’ll be asked to log a lion’s share of the minutes as well given the absence of Darian Skeoch, Dylan Plouffe and Matt Barberis. Byram has three goals in in his past three games.

David Tendeck: Tonight will be David Tendeck’s first look at the T-Birds this season. Todd Scott played in each of the first two meetings between the two clubs. Tendeck was strong, albeit in a losing effort Wednesday. For the season, he’s 19-10-2-2 with a .910 save percentage and a 2.97 goals-against-average.

A young blueline: The Giants will be missing 454 career games of WHL experience from their lineup tonight, which means the likes of Brennan Riddle, Bowen Byram, and Kaleb Bulych especially are going to be tasked with lots of big minutes. This isn’t necessarily a bad thing as the young ‘D’ have a great chance to rise to the occasion and seize the added opportunity in front of them tonight.