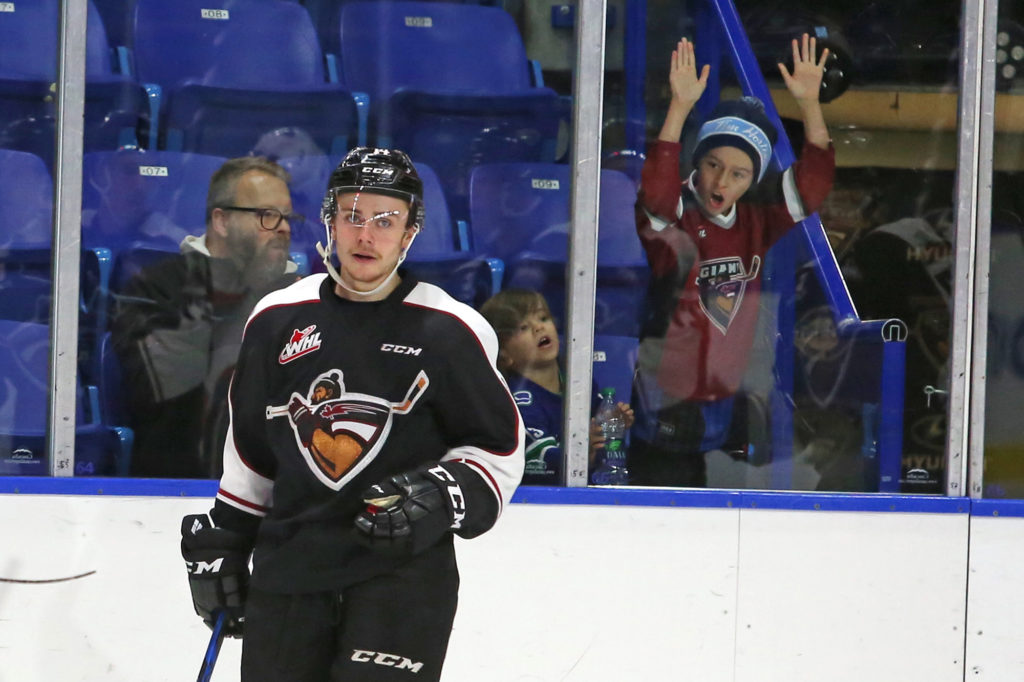 Tonight at the Langley Events Centre, the Vancouver Giants wrap up the month of November with one final home game. For the second time this season the Giants will battle the defending WHL champs, the Seattle Thunderbirds. Both teams are looking to snap modest losing streaks while also earning a leg up on the other in the Western Conference standings. Both teams come into tonight’s game with 24 points and it’s not unrealistic to suggest that these two clubs will be competing against each other all season long for a playoff spot in the Western Conference.

Last Game: A 2-1 road loss to Victoria on Saturday.

Sami Moilanen: The 18-year-old forward from Finland leads the T-Birds in goals with 13. He’s managed 13 goals and seven assists for 20 points in 21 games this season. Last season he had 21 goals and 22 assists for 43 points.

Nolan Volcan: Volcan has points in six of his last seven games and during that span he’s registred five goals and four assists for nine points. He’s tied for second in team scoring with 10 goals and 14 assists for 24 points.

Austin Strand: The 20-year-old signed a three-year entry level contract with the Los Angeles Kings yesterday, and rightfully so. He’s recorded 10 goals and 16 assists for 26 points which is tops on the team. Strand has played in each of the past two Memorial Cup Tournaments – Last season with Seattle and the season prior with Red Deer.

Turner Ottenbreit: Fellow 20-year-old Turner Ottenbreit is one of the most intimidating defencemen in the WHL. The 6’4”, 193-pound defenceman can chip in offensively as well having posted four goals and seven assists for 11 points in 17 games this season.

Matt Berlin?: The Seattle Thunderbirds have four goaltenders listed on their roster, but two (Liam Hughes and Carl Stankowski) are on the WHL injury report this week. Matt Berlin has played the most of any Seattle goaltender this season having appeared in 14 games. He’s got a record of 7-6-0-1 with a 3.27 goals-against-average and an .895 save percentage. He backed up newcomer Dorrin Luding on Saturday.

Team Defence: The Seattle Thunderbirds are as good a defensive-team as any in the WHL thanks to the likes of Austin Strand, Turner Ottenbreit, Jarret Tyszka and Reece Harsch patrolling the back-end. The quality of defence allows the Thunderbirds to play in a lot of close, low-scoring type of games.

Last Game: A 5-2 loss to Everett on the road Saturday.

Tyler Benson: The Giants captain has been one of the most consistent performers as of late for the Giants. He comes into tonight riding a four-game point streak and during that span has scored four goals while adding three assists. For the season he has eight goals and 11 assists for 19 points in 13 games played.

Milos Roman: The 18-year-old Slovak leads all WHL rookies in scoring with six goals and 17 assists for 23 points. He and his linemates Ty Ronning and Brad Morrison are a threat every time they take the ice. They’ll have their hands full tonight against the stingy Seattle defense, but they’re too good not to create good looks offensively.

Dylan Plouffe: The 18-year-old scored a power play goal for the Giants on Saturday night in Everett and now has matched his goal totals from a season ago. He’s just two points shy of his point totals from last season. With Matt Barberis and Bowen Byram both out with injury, even more onus will be placed in Plouffe’s shoulders tonight at both ends of the ice.

Darian Skeoch: Not unlike Plouffe, the 20-year-old Skeoch is going to be tasked with playing big minutes tonight with the absence of Barberis and Byram. Skeoch contributes so much leadership, physicality and energy to the Giants and they’ll need to him to be at his best tonight.

Todd Scott?: If we go based on the rotation it would be Todd Scott’s turn. He helped the Giants earn a single point against Seattle back on October 10th. For the season Scott’s record is 4-6-2-1 with a 4.06 goals-against-average and an .874 save percentage. Whether it’s Todd Scott or David Tendeck between the pipes, the Giants are going to need their goaltender to be at their best as they try and snap their three-game skid.

Special Teams: The power play lately has been awesome: 14/35 (40%) in last nine games. The penalty kill though has been a concern going 24/39 (61.5%) in that same span. The big key for the Giants tonight will be to stay disciplined, and if they do find themselves in the penalty box they’ll need their penalty kill to rise to the occasion against a formidable Seattle power play.