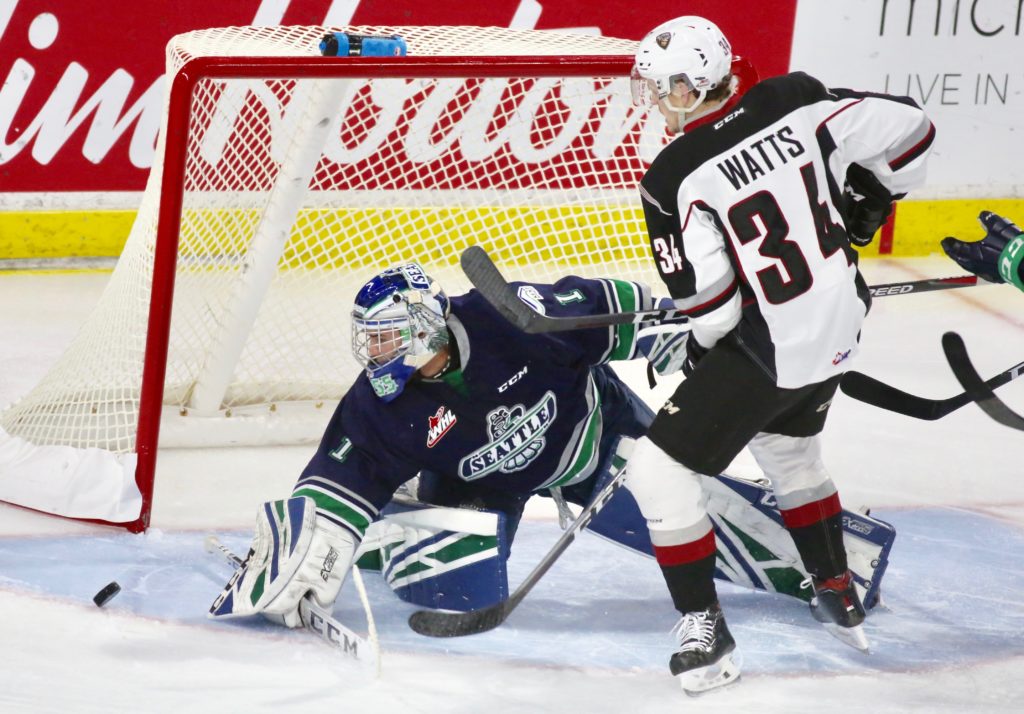 Tonight at the LEC the Vancouver Giants and Seattle Thunderbirds will continue their first-round series. Last night the Giants were full marks in a 7-1 victory and subsequently have a 1-0 lead in the best-of-seven series. The Seattle Thunderbirds will no doubt be looking to avenge last night’s defeat and with a win tonight could snag home ice advantage in the series. Tonight’s game gets started at 7:00 PM.

Seattle’s lone goal last night in Game 1 came off the stick of 1999-born Slovak forward Andrej Kukuca. Originally from Tencin Slovakia, Kukuca is fresh off a terrific rookie season in the WHL. In 59 games played he posted 26 goals and 32 assists for 57 points. He also finished with nine power play goals and a +14 rating. In three games against the Giants during the regular season, Kukuca recorded two assists. Last night he led all Seattle Thunderbird skaters with four shots on goal. He was originally selected by the Seattle Thunderbirds 29th overall in the 2018 CHL Import Draft. Kukuca was a teammate of Milos Roman’s with Slovakia during the 2019 World Juniors. He checks in a 6’2″ and 185 pounds and is eligible for the 2019 NHL Draft.

With six seconds remaining in last night’s game, Seattle defenceman Jake Lee received a five-minute major penalty for crosschecking Giants forward Justin Sourdif into the Seattle net while he was on a breakaway. Sourdif’s status for Game 2 at this stage is unknown but all major penalties are subject to review by the WHL head office. Jake Lee was the 18th overall pick by the Seattle Thunderbirds in the 2016 WHL Bantam Draft. This season he compiled three goals along with 21 assists for 24 points and was a +8. The sophomore defenceman plays big minutes in all situations for Seattle.

WILL ROSS BOUNCE BACK?:

Twice Roddy Ross has faced the Vancouver Giants. Twice Roddy Ross has not finished the game. Last night Ross was removed from the game in the third period after surrendering his sixth goal against. Ross’ talent level is undeniable and his successful rookie campaign has been a MAJOR reason why the Seattle Thunderbirds have made the playoffs. Odds would suggest that Roddy Ross gets the start tonight in Game 2 for Seattle. Two things to keep in mind: He went 15-for-15 in the first period last night and for the regular season he went 16-5-1-2.

Dylan Plouffe played a major part in the Vancouver Giants 7-1 victory over the Seattle Thunderbirds in Game 1 of their first-round playoff series last night. The 1999-born product of Sherwood Park led all skaters with two goals and an assist for three points and also finished with a +2 rating. Plouffe’s first goal came late in the second period to make the game 4-0 and then followed up with a power play marker in the third that spelled the end of the night for Seattle starting goaltender Roddy Ross. Plouffe now has three goals and one assist for four points in eight career playoff games. Plouffe has now scored a goal in three consecutive games dating back to the regular season. Plouffe finished the 2018-19 regular season with eight goals and 27 assists for 35 points and a +10 rating.

2001-born goaltender Trent Miner got the nod for Game 1 and was excellent turning aside 27 of the 28 Seattle shots fired his way. Despite the lopsided score, Trent Miner was a ‘factor’ for the Giants last night, particularly in the second period when the game was still within reach for the Seattle Thunderbirds. Miner is now 2-0 in his young career in Game 1 playoff games and assuming he gets the nod tonight for Game 2 he’ll look to put forth a similar effort. During the regular season Miner was 24-5-1-1 with a 1.98 goals-against-average and a .924 save percentage.

Dawson Holt has always proclaimed that “the bigger the game, the better he plays.” Well simply put: He’s right. Last night Holt posted a goal and an assist for the Giants en route to their 7-1 win over Seattle. In eight career playoff games, Holt has scored three goals to go along with seven assists for 10 points. He looked right at home beside Davis Koch and Tristen Nielsen. Tonight Holt and his linemates will look to make a similar impact.