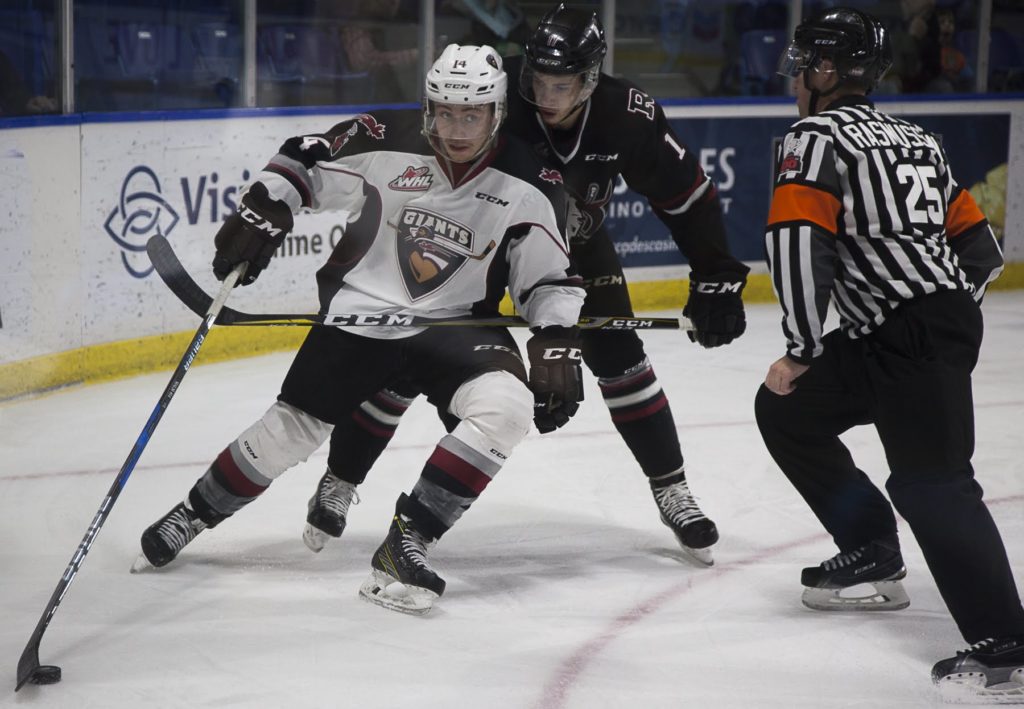 Despite last night’s heartbreaking loss, Jason McKee’s Vancouver Giants cannot afford to hang their heads. A victory tonight for the Giants against the Red Deer Rebels would give them three wins in four games in a five-day span. The shock and sting of last night’s result is no doubt front of mind today for Vancouver, but they’ve shown a remarkable ability all season long to bounce back from tough losses and tonight against Red Deer the message will be no different. The Rebels are one of the hottest teams going right now and will not be lacking any desperation on their own side tonight as they wrap up a road trip that has spanned the last nine days.

Mason McCarty: The 20-year-old comes into tonight’s game with a three-game goal scoring streak. He leads all Rebels in goals (31) and points (57). McCarty is already 20 points ahead of his previous season-high for points which he set last season and has provided the Rebels with a solid veteran presence since being reacquired by the Rebels in a summer trade with Saskatoon.

Kristian Reichel: The 19-year-old first-year Import has put forth a nice season for Red Deer. His 25 goals and 44 total points rank him second on the team. Over his past six games he’s compiled five goals along with one assist. He represented the Czech Republic at the 2017-18 World Juniors.

Alexander Alexeyev: Second-year defenceman Alexander Alexeyev leads all Red Deer blueliners with seven goals and 28 assists for 35 total points. Alexeyev has recorded points in each of his past eight games and during that span has posted three goals and eight assists for 11 points. He was ranked #26 among North American skaters on NHL Central Scouting’s Midterm Rankings List.

Dawson Barteaux: The 17-year-old defenceman was selected 14th overall by the Regina Pats in 2015, but was dealt to Red Deer in a trade deadline deal in 2017 that saw Josh Mahura go the other way to Regina. Barteaux is having a good season having notched three goals and 22 assists for 25 points. NHL Central Scouting ranked him #156 among North American skaters in the midterm rankings.

Energy/Confidence: The Red Deer Rebels have won three straight and are 8-1-1-0 in their last 10. The only other team with that type of recent success is the Swift Current Broncos. The Rebels have been winning with depth, goaltending and a good honest effort, not unlike the Vancouver Giants. They have the added bonus of being the fresher team tonight as they sat idle last night while the Giants played in Victoria.

Ty Ronning: The Giants leading scorer came up big yet again last night for the Giants. His two power play goals increased his total to 53 goals in 57 games, and only Moose Jaw’s Jayden Halbewachs has scored more (54). Ronning’s 14 power play goals and +16 rating are also both tops on the team.

Brayden Watts: The California native now has goals in three straight games after scoring in the third period last night in Victoria. He now has 15 goals to go along with 19 assists (34 total points), which ranks him fifth among forwards and sixth overall on team scoring. Watts is 16 points ahead of his point totals from last season already.

Bowen Byram: Chalk up another assist for Bowen Byram who now has 22 points through 47 games to put him third among Giants defencemen in scoring. Byram has played a ton in February due to the recent string of injuries and once again he’ll be tasked with some big minutes in all situations tonight at home against Red Deer.

Darian Skeoch?: Finally, a bit of good news on the injury front for the Giants as 20-year-old Darian Skeoch ‘could’ return to action tonight at home. Skeoch hasn’t played since February 3rd and while he won’t set the world on fire offensively, he’s a veteran physical presence who brings experience, leadership and some nastiness to the Giants roster. His return will be a welcomed sight for a Giants defense-corps that can now add a third non-rookie back to the defensive fold.

David Tendeck: David Tendeck’s rise to prominence has been one of the Giants best stories of 2017-18. He’s been a very busy guy this week having faced 79 shots already and stopping 76 of them. His overall record is 22-11-2-2 with two shutouts, the league’s second best save percentage at .916 and the league’s third best goals-against-average of 2.86.

Empty the Tank: Following tonight’s game, the Giants don’t play again until Friday at home against Everett, which means that they’ll be expected to empty their collective tanks tonight at home. A victory and the Giants can claim without hesitation that they’ve had a successful week, and given the time of year it’s crucial that the Giants earn every possible inch of ice out there tonight against a Red Deer Rebels club that is playing for their playoff lives.