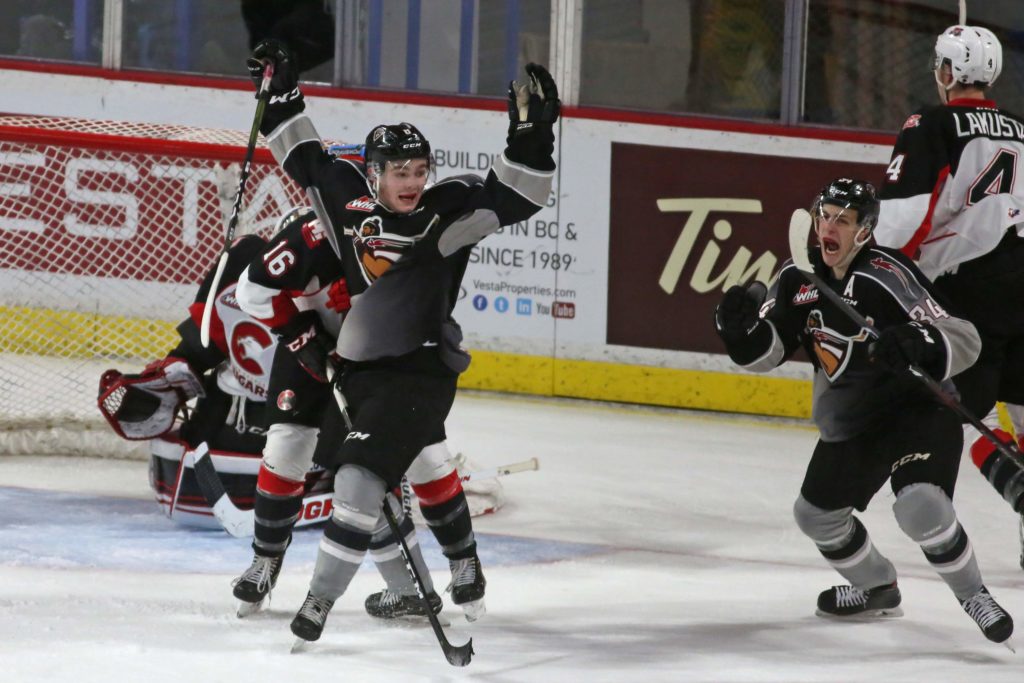 Today at the LEC the Vancouver Giants wrap up a busy week of games with their ninth and final meeting of the season with the Prince George Cougars. The Giants are 3-0 so far this week and are looking to make it five straight wins today when they welcome a Cougars team that is winless in their last 12 games. The Giants and Cougars were both idle yesterday, meaning both teams should have similar energy when they take the ice today.

Last Game: A 4-3 road loss on Friday night in Kelowna

LAMB TAKES OVER THE BENCH:

Earlier this week the Prince George Cougars made a change at the head coaching position. After nearly three full seasons behind the bench, Richard Matvichuk was relieved of his head-coaching duties and was replaced on an interim basis by General Manager Mark Lamb. Nick Drazenovic is also a new face behind the Cougars bench as he was promoted to a role as an assistant coach. Matvichuk’s record over the course of three seasons was 85-89-22. He helped guide the Cougars to their first B.C. Division championship banner during the 2016-17 season. Mark Lamb is no stranger to coaching having seven full seasons behind the bench of the Swift Current Broncos serving as both the Head Coach and GM.

Despite his team’s struggles, 1999-born forward Vladislav Mikhalchuk continues to be a consistent point producer for the Cougars. Coming into today’s game, the Belarusian leads the Giants with 41 points in 53 games. He’s currently riding a six-game point streak. During that span he’s registered four goals and three assists for seven points. He leads all Cougars with two goals and four assists for six points against the Giants.

With 15 games remaining in their season the Cougars trail the eighth placed Seattle Thunderbirds by 10 points in the Western Conference standings. The Cougars have made the playoffs in four of the past five seasons but admittedly will need to catch fire and patch a string of wins together in order to make up some ground on Seattle. Both the Giants and T-Birds have played 53 games this season, and none of their final 15 games are against each other.

Last Game: A 3-1 road win on Friday night in Kamloops

When the Vancouver Giants needed an offensive spark on Friday night, Tristen Nielsen came through in the clutch. The 2000-born forward scored twice in a span of one minute and 58 seconds in the back-half of the third period, breaking open a 1-1 tie in what ended up as a 3-1 victory for the Giants over the Kamloops Blazers. He added an assist on Lukas Svejkovsky’s first period goal giving him his fourth three-point game of the season. For the season Nielsen has recorded nine goals along with 18 assists for 27 points. He’s also notched five multi-point games and two game-winning goals. From January 12th through January 30th, Nielsen recorded a nine-game point streak (three goals and 12 assists for 15 points). During that span the Giants went 8-0-0-1.

The Vancouver Giants come into today’s game having recorded just one regulation loss in their past 15 games. During that stretch the Giants are 13-1-0-1. This strong stretch has vaulted the Giants back to within  three points of the Everett Silvertips for first place in the Western Conference standings while holding a game in hand. Since January 12th the Giants have compiled a record of 5-0-0-1 at home while on the road the Giants are 7-1.

CLOSING IN ON A CLINCH:

The Giants cannot officially clinch an outright playoff spot with a win today, but they’ll be awfully close. Coming into action tonight the ninth placed Kamloops Blazers have 32 available points remaining that they can earn. Assuming they earn all 32 of those points, they’d finish with 77. The Giants already have 75 points, meaning a win today would give them 77 points and would, at the very least, assure them of a tie for the eighth placed wild-card spot. One more Kamloops loss coupled with one more Giants victory would help the G-Men clinch a playoff spot for a second straight season.