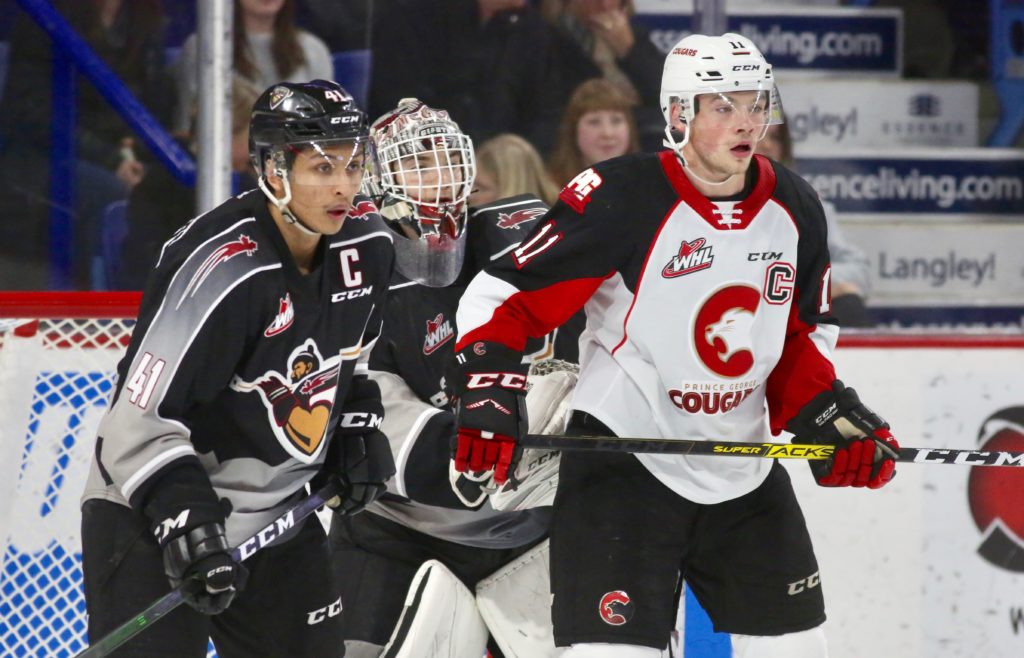 Tonight at the LEC the Vancouver Giants continue their lengthy home stand when they take the ice against their B.C. Division rivals from the North, the Prince George Cougars. The Giants have won four straight and enter the day eight points back of the Victoria Royals for second place in the B.C. Division. The Prince George Cougars have won two straight and are looking to inch closer to the final playoff spot in the Western Conference. They enter the day seven points back of Seattle.

Last Game: A 2-1 shootout victory at home Wednesday against Seattle.

2001-born goaltender Taylor Gauthier is doing everything in his power to get his team back to the WHL playoffs. The product of Calgary, AB backstopped the Cougars to back-to-back victories against Seattle earlier this week at home, and improved his season record to 12-19-3-4 with a .919 save percentage, a 2.79 goals-against-average and one shutout. Dating back to January 25th Gauthier has won his past four starts. In three games against the Giants this season, Gauthier is 1-2 with a 3.20 goals-against-average and an .896 save percentage. His one victory against the Giants though was a 3-0 shutout victory back on December 17th. After he was shockingly passed over in the 2019 NHL Draft, Gauthier has certainly put himself back on the NHL radar with his solid play this season. He was ranked #27 on NHL Central Scouting’s mid-term NA goalie rankings.

Last Game: A 12-4 victory over the Tri-City Americans on Tuesday.

A BIG GAME FOR SHEPARD:

During Tuesday’s 12-goal outburst against the Tri-City Americans, no Giant recorded more points than 2002-born rookie forward Cole Shepard. The West Vancouver product led all Giants skaters with four points (all assists) in the 12-4 victory. That four-point effort from Shepard made him the second Giant (Justin Sourdif, Nov. 2 in Tri-City) this season to record four points in a game. For the season, Shepard has posted nine goals and 13 assists for 22 points to lead all Giants rookies. Back in January, Shepard was ranked #153 on NHL Central Scouting’s Mid-Term rankings list of North American skaters that are eligible for the 2020 NHL Draft. Over the course of his past four games, Shepard has managed six assists.

Coming into tonight’s game, Eric Florchuk has posted points at in each of his past five games. During that span, the Washington Capitals prospect has notched one goal and eight assists for nine points. Since joining the Giants at the trade deadline, Florchuk has collected 16 points (5G, 11A) over the course of his first 11 games. In 234 career games in the WHL (Victoria, Saskatoon, Vancouver) Florchuk has scored 56 goals along with 93 assists for 149 points.