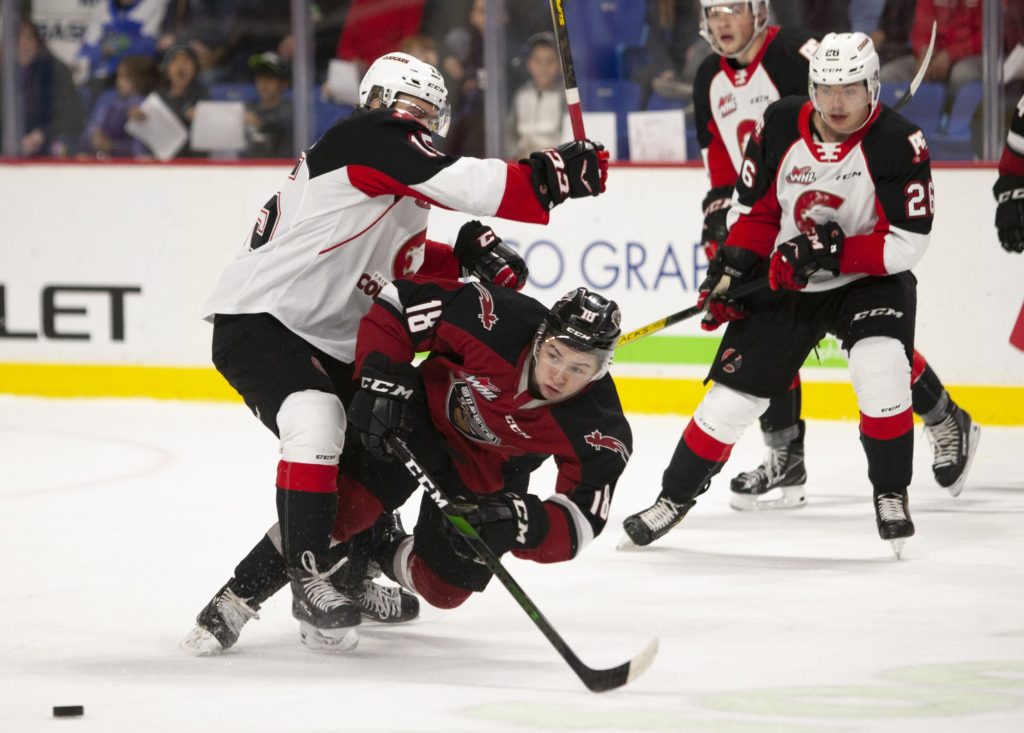 Tonight at the Langley Events Centre, the Vancouver Giants look to extend their regulation unbeaten streak to six straight games when they host the Prince George Cougars. The Giants are 5-3-1-1 in their last 10, and haven’t lost a game in regulation since October 25th against Everett. The Cougars meanwhle have one win in their last 10 and have dropped six straight. That lone win for Prince George came against the Giants back on October 27th.

Last Game: A 1-0 loss last night in Kamloops against the Blazers

2000-born defenceman Cole Moberg is on a strong run as of late for the Prince George Cougars. Heading into tonight’s game Moberg has registered six points in his past four games, and 10 points in his last nine. Currently he ranks second on the Cougars in scoring with three goals and nine assists for 12 points in 16 games. In three games against the Giants so far this season, Moberg has registered a goal and two assists for three points. The North Vancouver, BC product was selected by the Chicago Blackhawks in the seventh round of the 2019 NHL Draft.

Fresh off representing Canada at the World Under-17’s, rookie goaltender Tyler Brennan is back with the Cougars and could very well be in line to get the start tonight. Brennan’s last start was back on October 27th against the Giants where he stopped 37 of the 39 shots he faced and was named the game’s first star in an overtime win for Prince George. For the season, Brennan is 2-0 with a 2.08 goals-against average and a .924 save percentage.

Last Game: A 2-1 shootout loss on Saturday night in Portland

MINER WITH A MAJOR WEEK:

2001-born goaltender Trent Miner has played a major role in the Vancouver Giants November success. The product of Brandon, MB earned WHL Goaltender of the Week honours last week after posting a 1-0-0-1 record in a home-and-home series with the Portland Winterhawks. Altogether Miner stopped 53 of the 55 shots he faced as the Giants extended their regulation unbeaten streak to five straight games. For the season Trent Miner has compiled a record of 5-4-1-1 with a .911 save percentage and a 2.50 goals-against-average. He is 4-0-1-1 in his last six appearances dating back to October 19th against the Swift Current Broncos. In June Miner was selected in the seventh round by the Colorado Avalanche making him just the third Giants goaltender to ever be selected in the NHL Draft.

Giants defenceman Bowen Byram had a strong showing earlier this week with Team WHL at the 2019 CIBC Canada Russia Series in Saskatchewan. Bowen Byram played well in both games, and played a major role in their 2-1 come-from-behind overtime victory on Wednesday night in Saskatoon. With under 30 seconds left in regulation, Byram scored the game-tying goal. A few moments later he set up Calen Addison’s OT winner. Last season Byram led all Giants with three goals and seven assists for 10 points against Prince George.