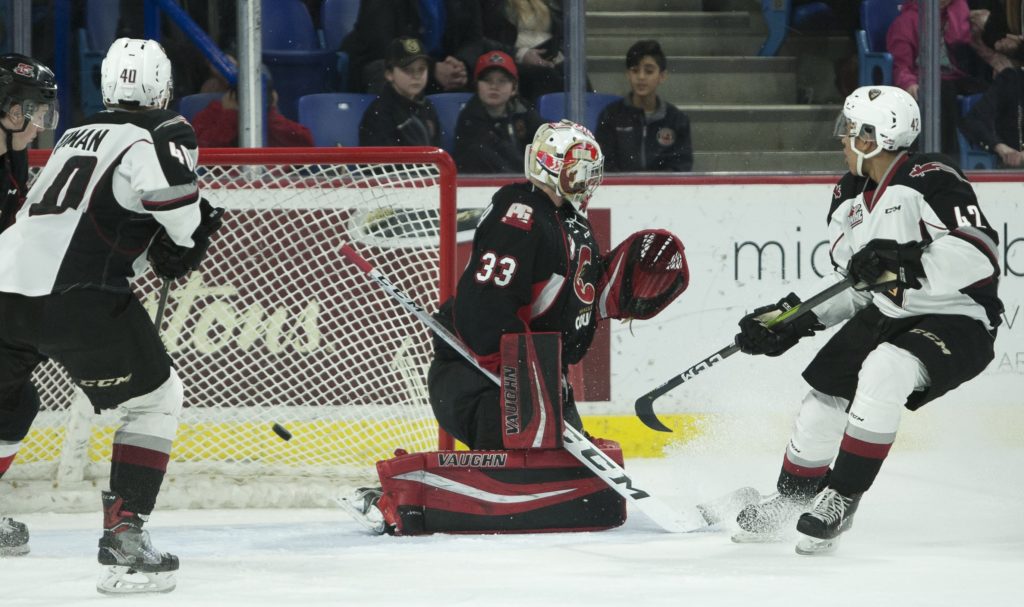 Tonight at the Langley Events Centre, the Vancouver Giants wrap up a four-game home stand with their first home battle of the season against the Prince George Cougars. The Giants are looking to snap a modest two-game losing skid while the Cougars are winless in their past three games. Earlier this weekend the Giants dropped a hard-fought 3-2 score to Everett at home on Friday while the Cougars were on the wrong end of a 5-2 decision last night in Kennewick, WA.

20-year-old forward Josh Maser continues to be one of the top offensive performers for the Prince George Cougars. The product of Houston, BC was acquired by the Cougars in a trade with Prince Albert back in 2016 and since then has struck for 67 goals and 36 assists for 103 career points. This season Maser leads the Cougars with six goals and two assists for eight points. Earlier this season he recorded a four-game goal-scoring streak from October 4th – October 12th. Altogether, Maser has scored six goals in his past nine games. For his career, Josh Maser has scored seven career goals against the Vancouver Giants, including a four-goal effort against them back on January 10th, 2018.

SHOT THROUGH THE ‘HART’:

2001-born defenceman Rhett Rhinehart comes into tonight’s game with one goal and four assists for five points along with eight penalty minutes. He scored one of the two Cougar goals last night in the Tri-Cities. Originally acquired by the Cougars in a trade deadline deal with Prince Albert back in 2018, Rhinehart has put himself on the NHL radar thanks to a strong sophomore campaign in 2018-19. Last season he had five goals and 19 assists for 24 points. He was ranked by NHL Central Scouting as a ‘C’ prospect on their Preliminary Players to Watch list earlier this month.

BRENNAN TO GET THE NOD?:

Cougars goaltender Taylor Gauthier was removed from last night’s game in Kennewick, WA with an injury. That means that rookie Tyler Brennan may be in line to get his second start of the season for Prince George. Brennan was the first goalie selected in the 2018 WHL Bantam Draft and comes into tonight’s game with a 2.17 goals-against-average and a .909 save percentage. He’s 1-0 on the season having won his only start of the season on October 5th against the Kelowna Rockets. He faced the Giants in relief back on September 21st and made 12 saves on 13 shots faced.

2001-born forward Lukas Svejkovsky has fast become one of the ‘go-to’ guys offensively for the Vancouver Giants. The product of Point Roberts, WA is in his second full season with the G-Men and has contributed two goals and three assists for five points in nine games. Originally drafted by the Giants in Round 2 of the 2016 WHL Bantam Draft, Svejkovsky has put himself on the NHL radar. Earlier in October he was listed on NHL Central Scouting’s Preliminary Players to Watch List as a ‘C’ grade, which projects that he’ll be selected in the middle rounds of the 2020 NHL Draft.

The 20-year-old product of Sherwood Park, AB brings a three-game point streak into tonight’s game. He’s posted a goal and two assists in that recent span of games. For the season, Plouffe has two goals and 10 assists for 12 points, and is tied for second in league scoring among defencemen. He has one assist in two games against Prince George so far this season.