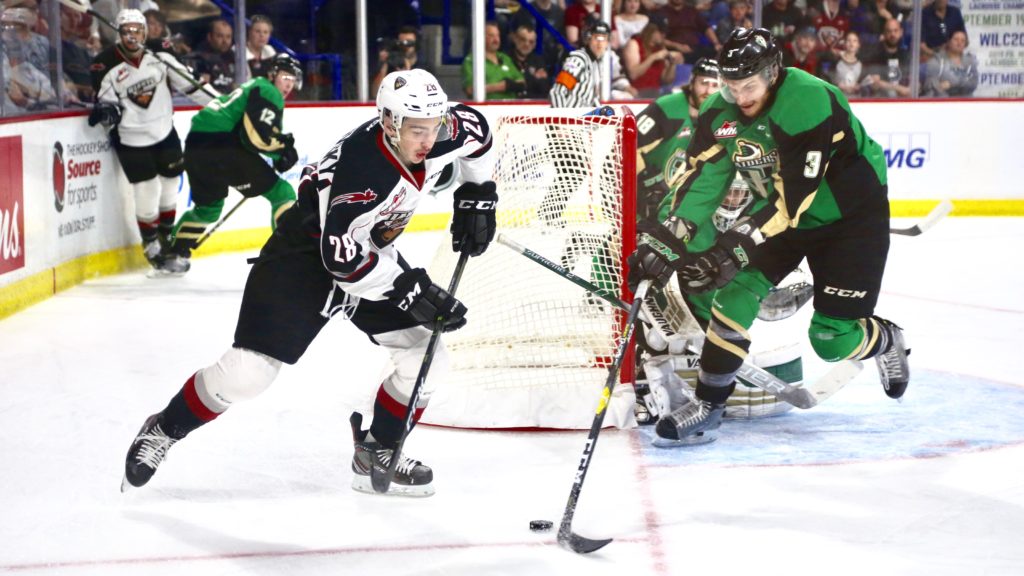 For the first time in the 2019 WHL Playoffs, the Vancouver Giants are facing elimination. Tonight at the Langley Events Centre, the Vancouver Giants are going to take the ice Game 5 of the 2019 Rogers WHL Championship Series against the Prince Albert Raiders, and will be doing so facing a 3-1 series deficit. A loss for the Giants and their season comes to an end. A win and the two teams will then head back on a plane tomorrow for a Game 6 showdown back in Prince Albert on Sunday at 5:00 PM PT.

The 2019 Top Goaltender in the Western Hockey League has proven well worthy of that honour so far in the 2019 Rogers WHL Championship Series. 1999-born Ian Scott comes into tonight’s Game 5 with a 3-1 record in this series with two shutouts, a 1.74 goals-against-average and a .934 save percentage. For the entire playoffs, Scott has played every second of hockey for the Raiders between the pipes and has compiled a record of 15-4-1 with five shutouts, a a 1.83 goals-against-average and a .931 save percentage. On Wednesday night, Scott turned aside all 36 Giants shots fired his way en route to a 1-0 Raider victory. With that win the Raiders find themselves one victory away from the Ed Chynoweth Cup. It’s been quite the calendar year for Ian Scott who in December, 2018 signed an entry-level with the Toronto Maple Leafs, the team that drafted Scott in the fourth round of the 2017 NHL Draft. Scott represented Canada at the 2019 World Juniors in Vancouver. Tonight Scott will once again look bring his best foot forward for the Raiders in the final game played this season at the LEC.

1999-born forward Brett Leason comes into tonight riding a seven-game point streak. In that span, Leason has registered seven goals and four assists for 11 points. Leason has scored at least once in each of the four games so far in this series, including the only goal in Wednesday’s 1-0 victory for the Prince Albert Raiders at the LEC. Leason comes into action tonight tied with Bowen Byram for the WHL playoff lead in scoring with 23 points. Keeping Leason in check for the remainder of the series is going to be imperative for the Giants if they hope to claw their way back and win it.

Some food for thought: The Prince Albert Raiders have clinched all three of their previous series on the road:

The Giants would love nothing more than to put an end to that streak with a win at home tonight.

Regardless of how this series ends up, tonight at the Langley Events Centre marks the final time during the 2018-19 season that fans will be able to watch Bowen Byram play. The 2001-born defenceman is one of the top prospects for the 2019 NHL Draft which takes place in Vancouver in June, and Byram and his teammates are hoping to send the home fans happy one more time before the series shifts back to Prince Albert. Byram leads all Giants in scoring both in this series and in the entire playoffs. In four games against the Raiders, Byram has registered five assists. His seven goals and 16 assists have him tied with Brett Leason for the WHL playoff lead in scoring. 2018-19 truly was a remarkable season for Byram who finished with 26 goals and 71 points. His 26 goals mark the most goals in a single season ever by a Giants defenceman. He also scored six overtime winners which stands as a new WHL single-season record. For what it’s worth: A defenceman has never led the WHL playoffs in scoring. Byram could add one more historical milestone to his young resume before all is said and done this season.

For Jared Dmytriw, Davis Koch and Dallas Hines, tonight could be their final game in the WHL unless they can snag a victory. All three are tremendous competitors and there will be no shortage of motivation across the board for the team to put their very best foot forward tonight with the 20-year-olds in mind. Koch and Dmytriw are ranked second and third in playoff scoring respectively for the Giants while Dallas Hines has notched two crucial game-winning goals for the Giants over the course of these playoffs.