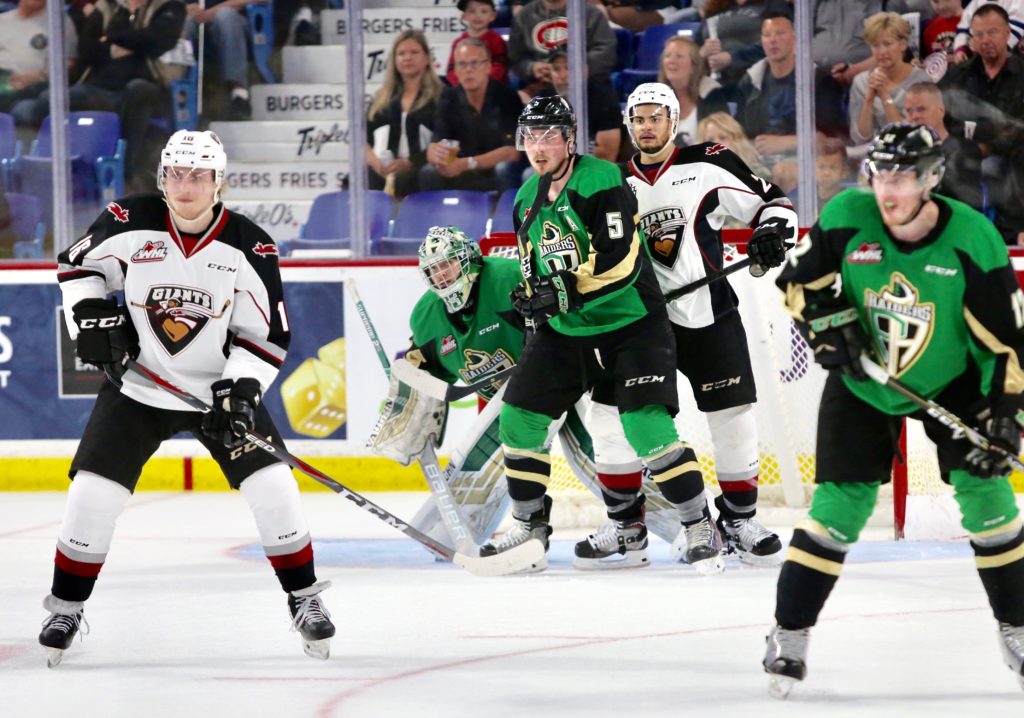 Tonight at the LEC the Vancouver Giants and Prince Albert Raiders will take to the ice for a pivotal Game 4 showdown in the 2019 Rogers WHL Championship Series with a 7:00 PM puck drop. Last night, the visiting Raiders were full marks in an 8-2 victory and now subsequently they’ll take a 2-1 series lead into tonight. A strong bounce back effort is full expected tonight by the Giants who have dropped two games straight in the playoffs for the first time throughout the entirety of the 2019 playoffs.

The 2018-19 season has been a revelation for 1999-born forward Brett Leason and judging by the way he is playing, he’s not planning on slowing down anytime soon. By now, Brett Leason’s story is well documented. He was dealt to the Prince Albert Raiders last season after scoring just once in 12 games with the Tri-City Americans. He finished off with a respectable 32 points in 54 games with the Raiders in 2017-18, but exploded out of the gates in 2018-19 posting points in 30 consecutive games to start the season! Leason finished the 2018-19 regular season with a team-leading 89 points in just 55 games played. Leason represented Canada at the 2019 World Juniors and has carried over his regular season success into the playoffs. Coming into action tonight Leason has recorded six goals over the course of his past six games along with three assists for nine points. Leason’s 21 points rank him second in team scoring during the playoffs.

In last night’s Game 3 victory for Prince Albert, 12 of their 18 skaters recorded at least one point. Six of those skaters recorded multi-point games. Brett Leason led the way with two goals and two assists but he had loads of help. Dante Hannoun continued his excellent series with another goal and an assist. Hannoun continues to lead all Raider skaters with seven points in three games so far against the Giants in this series.

After a tough outing in Game 1, Ian Scott has bounced back with two strong performances in a row, both of which have been victories. For the series, Scott is 2-1 against the G-Men with one shutout, a 2.35 goals-against-average and a .900 save percentage. He made 27 saves on 29 shots faced, and was arguably more effective in Game 3 then he was in Game 2 where he only had to make 15 saves in the Raiders shutout victory. Scott has played every single second of hockey for the Raiders between the pipes so far during the playoffs.

Situations like these are when you need your leadership to rise to the occasion, and nobody has done a better job of that over the course of the playoffs than Giants captain Jared Dmytriw. The Craven, SK native has been outstanding for the Giants all throughout the playoffs and the Rogers WHL Championship Series has been no exception. Dmytriw has notched a goal and three assists for four points through the first three games of this series, and coming into tonight’s game he currently sits third in team scoring during the playoffs with eight goals and nine assists for 17 points. Dmytriw earned a single assist in last night’s loss to the Raiders and was named the first star in Game 1 of this series after posting a goal and two assists for three points. Dmytriw is a +11 and has added two game winning goals and 16 penalty minutes through 18 playoff games.

2000-born forward Yannik Valenti is starting to play with a huge amount of confidence. Three power play goals over the course of his past seven games will do that for a player who went through the usual ups-and-downs that first-year players go through in the WHL during the regular season, but Valenti has surged in the playoffs! Valenti has scored two power play goals so far in this series and those two goals for Valenti tie him with Dawson Holt for the most goals from any Giant against the Raiders through three games.

TIME FOR A BREAKOUT:

There are a number of Giants that are due to break out offensively. All are gifted players who have contributed an incredible amount to the Giants success over the course of the playoffs, but no doubt they’ll all be looking to step up and be counted on the scoresheet as this series progresses: