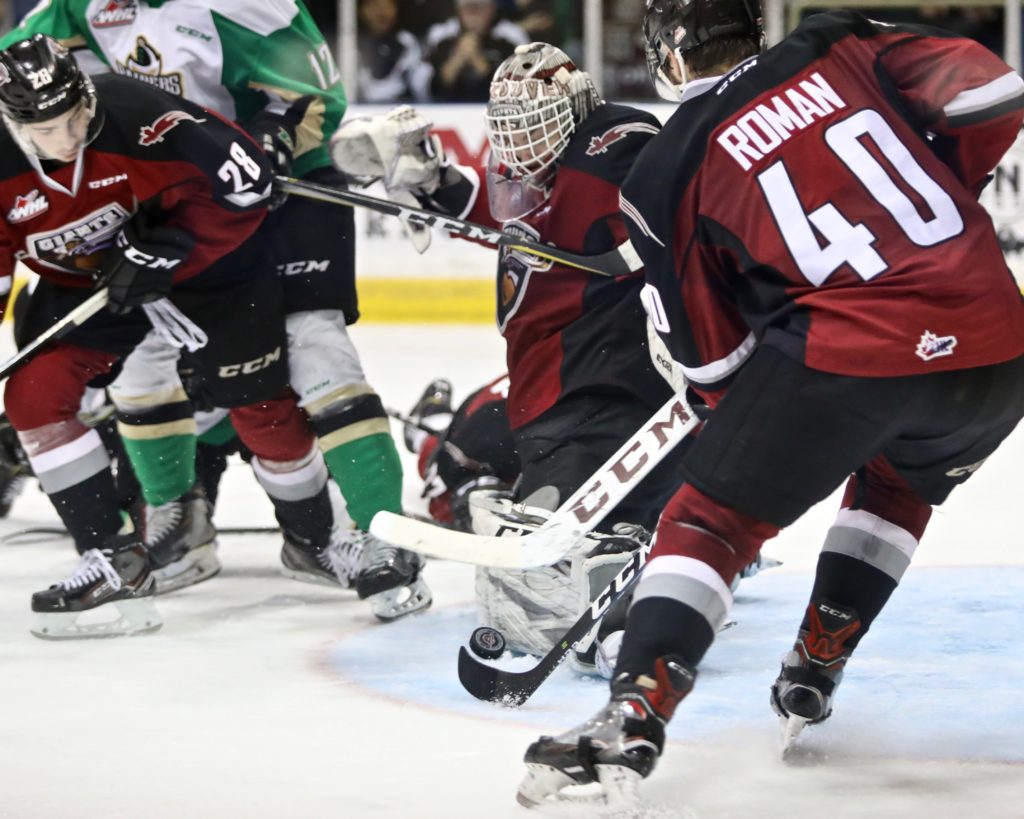 The Rogers WHL Championship Series has now shifted to the Lower Mainland for the next three games. Tonight at the Langley Events Centre, the Vancouver Giants will look to use home ice to their advantage as they seek a measure of revenge on the Prince Albert Raiders. To their credit, the Giants earned a split in Games 1 and 2 played last weekend at the Art Hauser Centre having defeated Prince Albert 5-4 on Friday in Game 1 before falling 4-0 Saturday in Game 2. In order to maintain home ice advantage in the series, the Giants will need to win tonight. The puck drops tonight at 7:00 PM in front of what should be the largest hockey crowd this season at the Langley Events Centre.

HOW DO YOU STOP HANNOUN?

No active WHL player has posted more points against the Vancouver Giants than Prince Albert Raiders forward Dante Hannoun. Including the regular season and playoffs, the product of Delta, B.C. has faced the Giants 52 times and has registered 56 points! Five of those points have come in the first two games of the 2019 Rogers WHL Championship Series as Hannoun has struck for two goals and three assists for five points to lead all Raiders. He was named the first star of Game 2 after securing a goal and two assists. Hannoun comes into this week’s action with 20 points in 18 playoff games, which ranks him second in WHL playoff scoring behind only Bowen Byram. Hannoun wrapped up his 20-year-old season in the WHL with 67 points in 56 games played (split with Victoria and Prince Albert). Over the course of his WHL career that has spanned 314 regular season games, Hannoun has compiled 108 goals and 171 assists for 279 points.

After a less-than-stellar Game 1, Toronto Maple Leafs prospect Ian Scott was marvelous in Game 2, stopping all 15 shots he faced in a 4-0 win for the Prince Albert Raiders. Scott now has four shutouts over the course of the 2019 WHL Playoffs and improved his record to 13-5 with a 1.92 goals-against-average and a .925 save percentage. Last week he was named the 2019 Goaltender of the Year for the WHL and tonight he’ll look to build off his solid Game 2 performance.

GREGOR, LEASON CHIPPING IN AS WELL:

So far in the series, the Raiders have received balanced scoring from throughout their lineup. Parker Kelly and Dante Hannoun have combined for nine points while veterans Noah Gregor and Brett Leason have scored goals in each of the first two games in the series. Gregor finished the regular season with 43 goals while Leason notched 36. Altogether the Raiders had five forwards (Leason, Gregor, Kelly, Fonstad and Hannoun) finish with over a point-per-game during the regular season.

In a season full of historic accomplishments, Vancouver Giants defenceman Bowen Byram has another milestone in his crosshairs. The WHL has never had a defenceman lead the playoffs in scoring, but that could all change in 2019. Coming into this week, Bowen Byram leads the league in scoring with seven goals and 15 assists for 22 points. That’s two points higher than Raiders forward Dante Hannoun. In Game 1 Byram paced the Giants attack with four assists and over the course of his past four games he’s managed two goals and six assists for eight points. What other milestones has Byram achieved this season? He finished with 26 goals which set a new single-season franchise record for goals by a defenceman. He then recorded six overtime goals which became a new single-season WHL record. He also became the first Giants defenceman to ever record five points in a game back on January 13th against the Kamloops Blazers. He finished with 71 points in 67 regular season games.

The Vancouver Giants have been near perfect on home ice during the playoffs, to the tune of a 7-1 record. The only home loss for the Giants so far at home came all the way back on March 23, a 4-1 loss to the Seattle Thunderbirds in Game 2 of their first-round series. The Giants have outscored their opposition 27/13 (+14) through eight home games. During the regular season the Giants were 3-1 winners against the Prince Albert Raiders, posting a 3-1 victory against them back on January 24th.