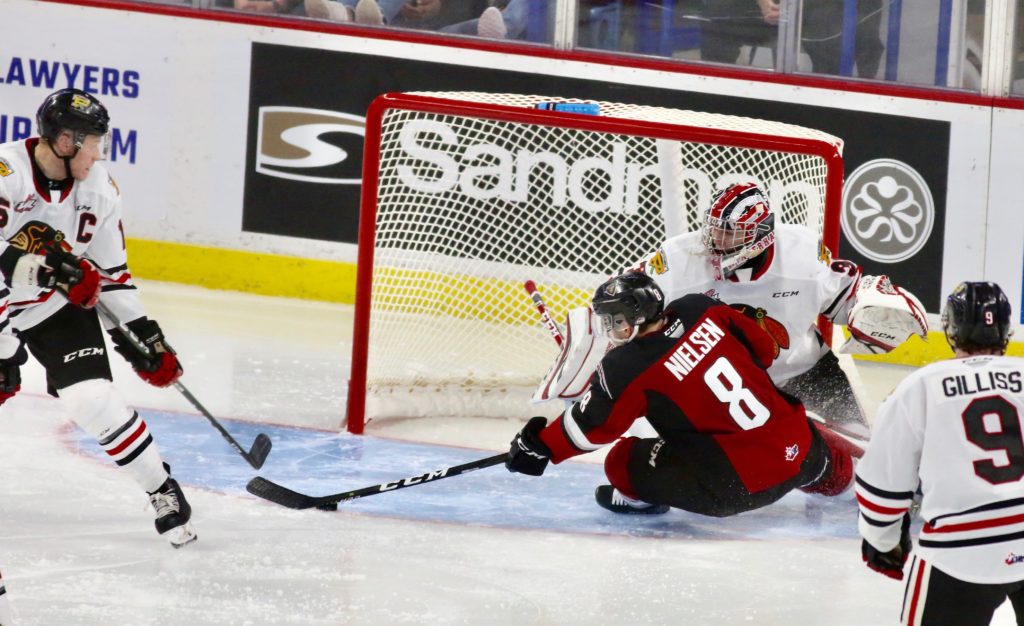 Tonight at the Langley Events Centre, the Vancouver Giants take aim at their third straight victory when they welcome Mike Johnston’s Portland Winterhawks to town for the first of a home-and-home. The Giants are coming off a pair of victories last weekend while the Winterhawks are looking to avenge a 6-5 loss to Kamloops that they suffered last Sunday.

Last Game: A 6-5 loss to Kamloops at home on Sunday.

2000-born goaltender Joel Hofer is the reigning Eli Wilson Goaltending Goaltender of the Week in the WHL. Hofer compiled a 2-0 record, a 0.90 goals-against average, and stopped 62 of 64 shots for a 0.969 save percentage in 133 minutes of action last week. Through 14 games this season, Hofer has a 10-2-0-1 record, a 1.89 GAA, a .933 save percentage and one shutout. Hofer leads the WHL in wins, is tops in the league in GAA, and is second in save percentage. Hofer was chosen by the St. Louis Blues in the fourth round (107th overall) of the 2018 NHL Draft.

The 2002-born forward from Winnipeg, MB leads all Winterhawks skaters with nine goals and 12 assists for 21 points. Jarvis is on track to obliterate his previous season high for both goals (16) and points (39). Jarvis is on a six-game point streak and has compiled six goals and five assists for 11 points in that span. He’s scored at least one goal in seven of his past nine outings.

Last Game: A 5-2 win at home against Medicine Hat

1999-born defenceman Dylan Plouffe has had a wonderful start to the 2019-20 season. The product of Sherwood Park, AB has registered five goals along with 11 assists for 16 points through 18 games. Plouffe had the game-winning goal on Sunday, November 3rd for the Giants in their 5-2 win over the Medicine Hat Tigers. A night earlier, he had two goals and an assist in a 5-3 road win in the Tri-Cities. Altogether Plouffe has scored four goals along with three assists for seven points in his past six games. His 16 points have him tied for second in league scoring among defencemen.

Tonight the Giants will have a new face in the lineup in the form of forward Joona Kiviniemi. The 2001-born forward from Oulo, Finland was acquired by the Giants in a trade earlier this week with the Swift Current Broncos. Kiviniemi had six goals and four assists for 10 points with the Broncos and should get ample opportunity to improve those offensive numbers with the Giants. He’ll wear #11.