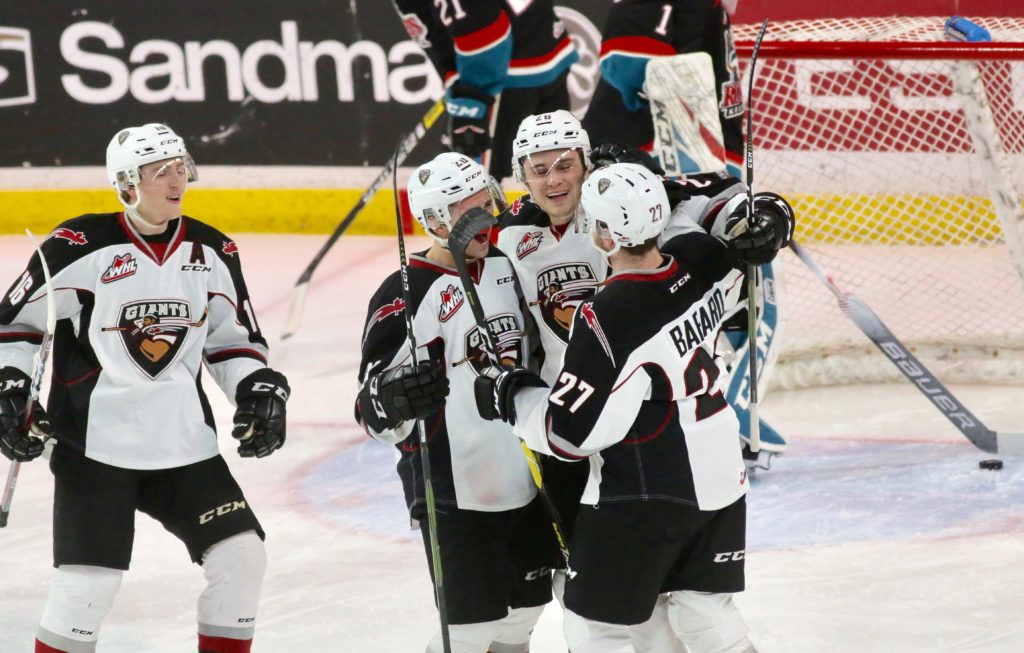 Tonight at the LEC the Vancouver Giants take the ice for their final home game of the 2018-19 regular season. There is no shortage of intrigue heading into this game tonight as both the Vancouver Giants and Kelowna Rockets have ‘everything’ to still play for. The Giants come into the weekend with a two-point lead on the Everett Silvertips. Simply put: A win tonight for the Giants coupled with a Silvertips loss in Victoria would help the Giants clinch first place in the Western Conference. Alternately if the Giants win both games this weekend, they’re in. Two Giants victories is the polar opposite of what the Kelowna Rockets are hoping for. Coming into this weekend they sit just one point ahead of the Kamloops Blazers for third in the B.C. Division standings. Two Kelowna losses would certainly open up the door for Kamloops to leap-frog them in the standings. The Giants are 5-0-0-1 against Kelowna to this point and are 2-0-0-1 against them at the LEC.

Last Game: A 6-5 overtime loss at home to Spokane on Wednesday night.

2000-born forward Nolan Foote is going to hear his name called in the early rounds of the 2019 NHL Draft The third-year forward from Englewood, CO has set a new season high for himself in goals (36) and points (62). His 36 goals lead the Rockets as do his his four goals against the Giants. Over the past 10 games, Foote has really elevated his game. During that span he’s recorded eight goals along with six assists for 14 points. Foote has recorded at least one point in nine of those past 10 games. Foote is especially dangerous on the power play as 17 of his 36 goals have come with the extra man. Foote was originally selected by the Kelowna Rockets in the second round (42nd overall) in the 2015 WHL Bantam Draft. In 166 career games with the Kelowna Rockets, Foote has tallied 68 times while adding 70 assists for 138 points. Foote had two goals against the Giants when they last met on March 1st.

1999-born forward Leif Mattson leads all Kelowna skaters with seven points this season against the Giants. All seven of Mattson’s points against Vancouver have been assists. For the season, Mattson currently sits third in team scoring with 62 points (22G, 40A). He was originally selected by the Brandon Wheat Kings in the eighth round of the 2014 WHL Bantam Draft.

KORCZAK PUTS UP FOUR AGAINST SPOKANE:

2001-born defenceman Kaedon Korczak is coming off a one goal, three assist performance on Wednesday against the Spokane Chiefs. The Yorkton, SK product now has four goals and 28 assists for 32 points this season. Earlier this season, Korczak cracked NHL Central Scouting’s Mid-Term Rankings List, coming in at #31 among all North American skaters. He’ll likely be picked within the first three rounds of the 2019 NHL Draft. He was a teammate of Bowen Byram’s at the 2018 Hlinka Gretzky Cup where Canada captured Gold back in August.

Last Game: A 5-1 win in Seattle on Tuesday night.

It has been an unforgettable sophomore season in the WHL for Cranbrook, B.C. native Bowen Byram. The 2001-born defenceman has re-wrote the history books for both the Giants and the WHL. Byram comes into tonight’s game with 26 goals and 44 points for 70 points which ranks him second on the team in scoring and third among all WHL defencemen. His 26 goals gives him the most goals ever posted in a single season by a Giants defencemen. Six of those 26 goals have come in overtime, giving Byram the single-season WHL record for overtime goals scored. Byram is widely considered to be one of the top NHL Draft prospects ahead of the 2019 Draft that will take place in Vancouver in June. In his past nine games, Byram has posted five goals and 10 assists for 15 points. In seven games this season against the Kelowna Rockets, Byram has put forth two goals and six goals for eight points.

The longest active point streak right now on the Giants roster belongs to rookie forward Lukas Svejkovsky. The 2001-born forward from Point Roberts, WA has points in each of his past six games and now has nine goals and 17 assists for 26 points on the season. Over the course of his six-game point streak, Svejkovsky has notched two goals and five assists for seven points. He scored twice on Tuesday in a 5-1 win in Seattle marking the first two-goal game of his WHL career.