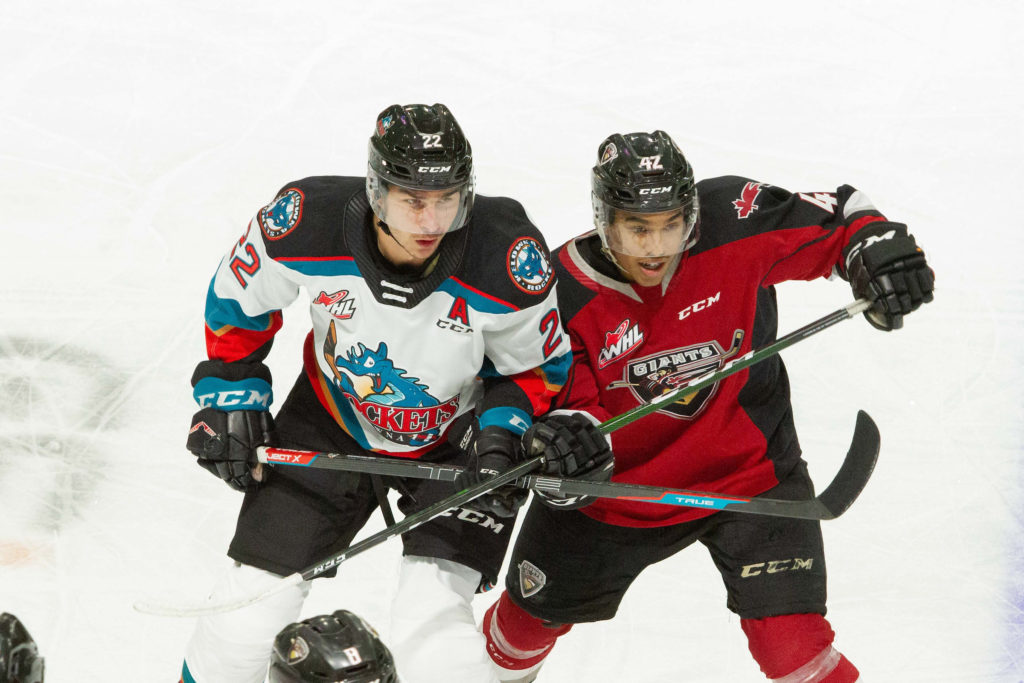 Tonight at the Langley Events Centre the Vancouver Giants look to snap a modest two-game losing streak when they take to the ice against the Kelowna Rockets for the first time this season. Last night the G-Men fell 7-4 in Kamloops, and are hoping that a quick turnaround can help their cause as they face a fresh Rockets club that hasn’t played in over a calendar week.

Last Game: A 4-2 win at home over Kamloops on October 15th

So far the early returns have paid off handsomely for the Kelowna Rockets after a late September trade sent Tyler Wong to Saskatoon in exchange for Chicago Blackhawks prospect Colton Dach. In two games with Kelowna, Colton Dach has registered three goals and one assist for four points. Originally selected sixth overall in the 2018 WHL Prospects Draft by the Saskatoon Blades, Dach was drafted by the Blackhawks in Round 2 (62nd overall in the 2021 NHL Draft. On October 1st, Dach inked a three-year entry-level contract with Chicago. Tonight’s game will mark just the second time Colton Dach has ever faced the Giants. The last time was October 9, 2019 when Dach was a member of the Saskatoon Blades.

In 2019, the Kelowna Rockets selected skilled 2003-born Czech forward Pavel Novak with the 13th overall pick in the 2019 CHL Import Draft. During his rookie season in the WHL, Novak struck for 25 goals and added 33 assists for 58 points which led the team and ranked him third among all WHL rookies in scoring that season. So far in 2021-2022 he hasn’t skipped a beat with a team- best six points (2G, 4A) in three games. Novak has posted two points in each of his first three games this season.
ROCKET NOTES

It didn’t take long for Fabian Lysell to discover his scoring touch at the WHL level. Last night in Kamloops, Fabian Lysell led all Giants skaters with three points (1G, 2A) and received second star honours for his efforts. Mid-way through the third period, Fabian Lysell skated onto a pass from Justin Sourdif, moved into the right-wing circle and wired home his first career WHL goal past the glove of Dylan Garand. In three games so far this season, Lysell has posted one goal and three assists for four points. The 2003-born forward is one of five Giants skaters currently at a point-per-game (or better) clip through four games.

Tonight marks the 2021-2022 season debut for Giants over-age defenceman Cade McNelly. The 2001-born product of Westlock, AB was suspended late in the 2021 season when he was still a member of the Seattle Thunderbirds, and tonight he’ll officially put a Giants sweater on for the first time in a game. In 121 career WHL games, McNelly has managed six goals, 11 assists and 315 career penalty minutes. His return to the Giants lineup will give them a full roster of 20-year-old players for the first time in a span of five games to start the season.