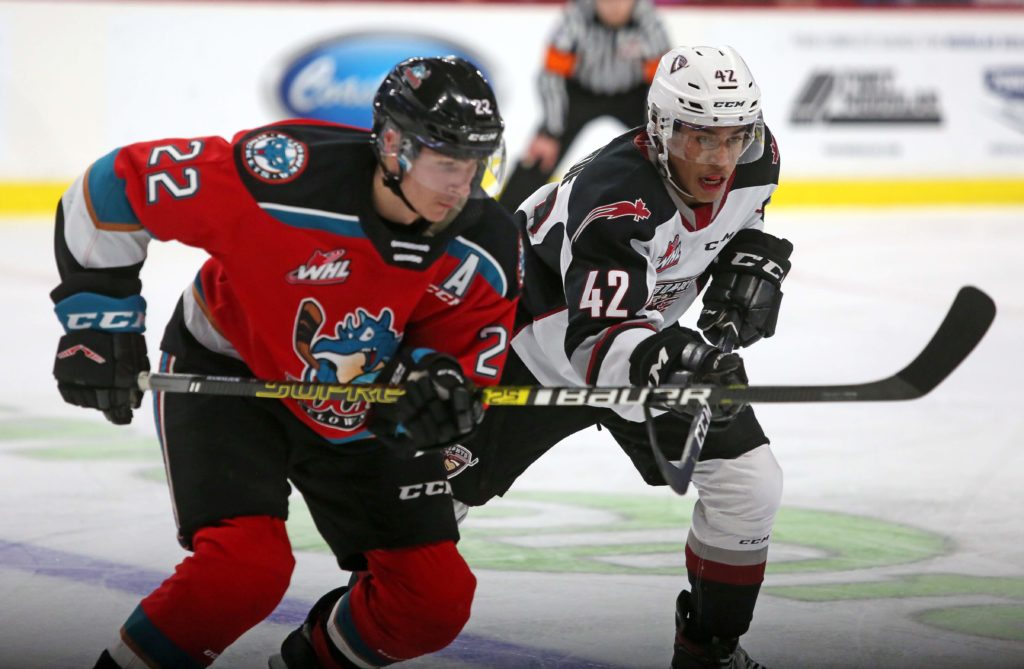 Tonight at the LEC the Vancouver Giants wrap up a stretch of three straight games at home when they take the ice against the Kelowna Rockets. Tonight’s matchup marks the start of a home-and-home weekend between the two clubs. The Giants are looking to get back into the win column following two losses to both Kamloops and Everett. The Rockets were 3-2 overtime winners last night at home against Seattle.

Over the years the Kelowna Rockets have churned out a number of notable NHL defencemen. Sooner than later, Kaedan Korczak will likely join the likes of Duncan Keith, Shea Weber, Tyson Barrie, Josh Morrissey, and Damon Severson as Rockets alumni patrolling NHL bluelines. This season, the 2001-born prospect of the Vegas Golden Knights has notched seven goals and 25 assists for 32 points, putting him one point shy of matching his point totals from a season ago. The Las Vegas Golden Knights drafted Korczak in the second round with the 41st overall pick in the 2019 NHL Draft in Vancouver.

A six-game losing streak came to an end last night for the Kelowna Rockets in dramatic fashion. With under two minutes remaining, Mark Liwiski deflected a Sean Comrie point shot home to tie the score at 2-2. Then at 3:58 of overtime, former Seattle Thunderbirds captain Matthew Wedman scored the game winner on a wrap-around giving the Rockets their 22nd victory of the season. The victory helped move the Rockets five points up on the Giants for third place in the B.C. Division standings.

Last Game: A 2-1 loss at home Thursday against the Everett Silvertips

The Giants are very excited about the future and what lies ahead for 2003-born forward Zack Ostapchuk. The 6’3″ forward from St. Albert, AB was drafted by the Giants 12th overall in the 2018 WHL Bantam Draft and so far has appeared in each of the first 43 games of the season for the Giants. He’s compiled five goals and three assists for eight points along with 14 penalty minutes. In four meetings so far this season against Kelowna, the rookie has notched one goal and one assist. Over the course of his past 10 games, Ostapchuk has scored three times, added one assist and is +4.

Thursday night at the LEC the Vancouver Giants dropped a 2-1 decision to the Everett Silvertips. Captain Alex Kannok Leipert opened the scoring for the Giants in the first period before the Silvertips countered with a goal from Gage Concalves. Despite being outshot 22-6 in the first period, the Giants were tied 1-1 and for the remainder of the game, Michael Dyck’s crew outshot Everett 22-9. With the score tied 1-1 in the third period, Silvertips forward Gage Concalves tipped home a Jake Christensen point-shot during an Everett power play which gave Everett their final lead of the night. It marked the third straight meeting with Everett where the Giants lost by a single goal.