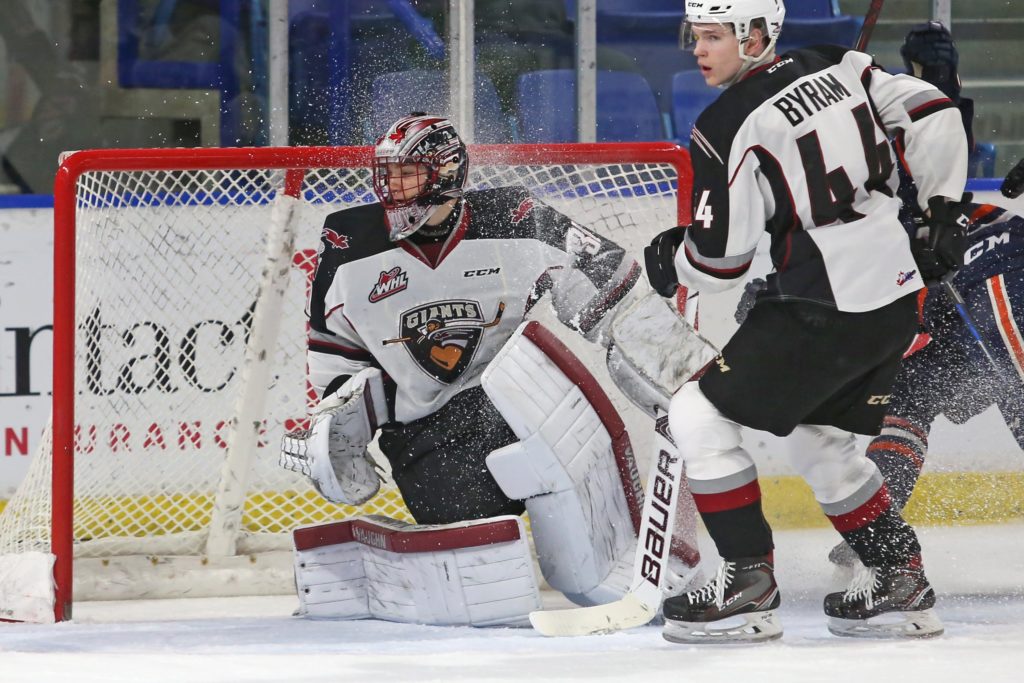 Tonight at the Langley Events Centre, the Vancouver Giants put their four-game winning streak on the line against their B.C. Division rivals, the Kamloops Blazers. It’s the first of eight meetings on the season between the two clubs. For the Giants it marks the first of three games in a span of three days while the Blazers will head to Everett to battle the Silvertips tomorrow night. The Giants were 5-3 against the Blazers a season ago, and were 3-1 against them at the LEC.

Last Game: A 2-1 loss at home last Saturday to Victoria.

Zane Franklin: Forward Zane Franklin has become something of a power play specialist for the Kamloops Blazers. Coming into this weekend he leads the team with five goals, four of which have come via the power play. Franklin was acquired by Kamloops in a summer trade with Lethbridge. Last season he scored 14 goals for Lethbridge, so he’s well on his way to setting a new season high for himself offensively.

Orrin Centazzo: 2000-born forward Orrin Centazzo is looking like a savvy acquisition for Kamloops. Acquired last season in a trade with Everett, Centazzo has shown early signs of a breakout season offensively. He leads all Kamloops forwards with eight points. Although he’s gone two games without a point, he recorded at least a point in each of his first five games in 2018-19.

Nolan Kneen: The 19-year-old from Duncan, B.C. leads all Blazers skaters with nine points (all assists) through seven games. Last season, Kneen set new season highs for both goals (10) and points (37). He’s played in 201 career WHL games, all with the Kamloops Blazers. He had a goal and four assists against the Giants a season ago.

Luke Zazula: The 2000-born blueliner from Langley B.C. is entering his third full season in a Blazers uniform. So far, Zazula has produced a goal and three assists through seven games with an even plus-minus rating. Last season he battled injuries and only suited up in 48 games, but still managed three goals and three assists from the back-end.

Dylan Ferguson: The 20-year-old prospect of the Las Vegas Golden Knights comes into tonight’s game with a 2-4 record through six appearances. Last season he went 2-3 against the Giants with a 2.94 goals-against-average and a .906 save percentage. Overall he finished 24-28-1-3 one shutout, a 2.95 goals-against-average and a .907 save percentage. His 59 appearances were third amongst all goalies.

Luc Smith: 20-year-old Luc Smith had five goals and five assists for 10 points against the Giants a season ago. Yet so far in 2018-19, Smith has been kept completely off the scoresheet through seven games. The 6’4”, 210 pound forward is a handful to defend and look for him to make his presence known in all different situations tonight for the Blazers.

Milos Roman: The 1999-born prospect of the Calgary Flames scored his first goal of the season last Saturday in Prince George and has very quietly put together a four-game point streak dating back to September 30th.Coming into the weekend, Roman sits third in team scoring with five points in seven games. Roman had two goals and eight assists for 10 points against Kamloops in 2017-18.

James Malm: The Giants leading scorer has compiled at least one point in six of the seven games so far this season, including each of the past five games. Malm leads the Giants with seven goals and three assists for 10 points. Last season against Kamloops he had seven assists in eight meetings against them.

Bowen Byram: The talented 17-year-old from Cranbrook, B.C. went viral last weekend with his spectacular game-winning goal that he scored against the Prince George Cougars. For the seaon, Byram has two goals and two assists for four points. Byram had five assists in six meetings with the Blazers a season ago.

Dylan Plouffe: The 1999-born defenceman continues to lead the Giants in plus-minus with a +8 rating.In fact Plouffe has not finished with a minus rating in each of his first seven games this season. Plouffe only appeared in four games against Kamloops last season but notched three assists.

The Commitment to Team Defence: Heading into action tonight the Giants have only surrendered 11 goals against through seven games. Along with the Victoria Royals, the Giants have surrendered the fewest goals against in the entire WHL and thus have a 6-1 record. This weekend against B.C. Division competition, the G-Men will look to keep that positive trend going in their favor.