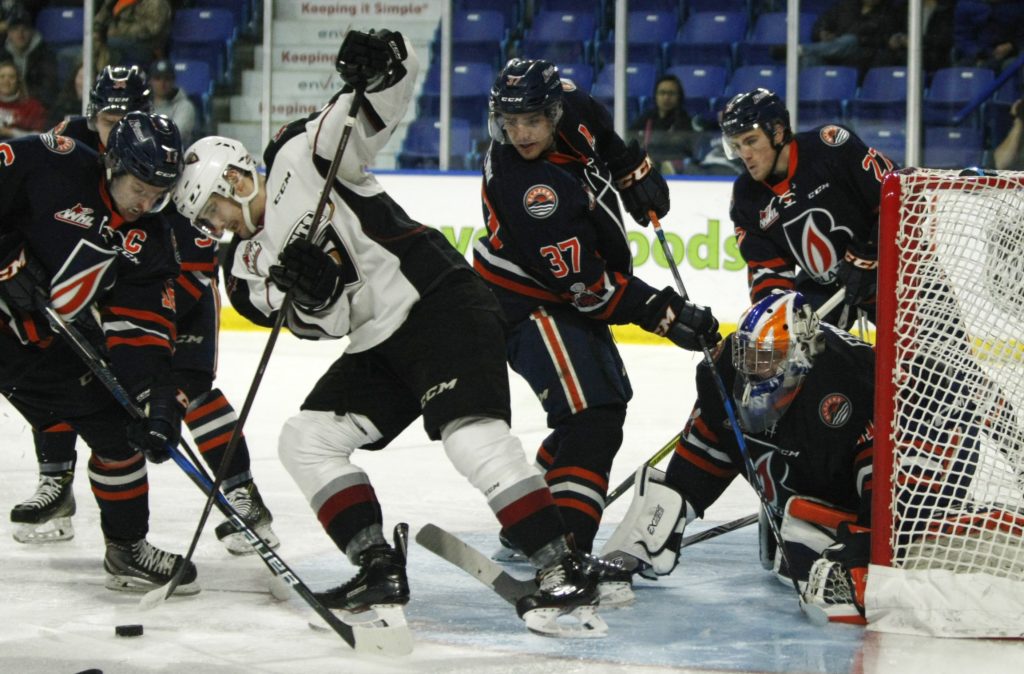 Tonight at home, the Vancouver Giants return to action with a measure of revenge on their minds. For a third time in a span of six games, the Giants will battle their B.C. Division rivals, the Kamloops Blazers. Earlier this week at home the Giants earned a hard fought 2-0 win. Last night the Blazers responded with a convincing 5-1 win of their own at home. This evening’s it’s all about the ‘response’ for the Giants as they look to win the rubber match and punch their ticket to the playoffs in the process.

Luc Smith: The 19-year-old led the charge last night with two goals and an assist for Kamloops. For the season he now was 19 goals and 41 total points. He’s three points shy of doubling his previous season high which he set in 2016-17.

Connor Zary: the 16-year-old buried his eighth of the season last night on the power play. That goal stood as the game-winner in a 5-1 triumph for his team. Zary sits second on the team in rookie scoring with eight goals and 17 assists for 25 points.

Nolan Kneen: 18-year-old Nolan Kneen had an assist last night, and along with Joe Gatenby logged major minutes in all situations for Kamloops. Offensively Kneen has broken out in a big way for Kamloops posting five goals and 28 assists for 33 points.

Brady Reagan: 20-year-old Brady Reagan played a heck of a game last night for Kamloops. He had a goal, he had an assist and was a +2 in the victory. Reagan has 294 career WHL games to his credit with Regina, Lethbridge and Kamloops and assuming he plays all six from here on out, he’ll arrive at the 300-game mark.

That same Relentless Attack: When the Blazers use their size and speed they are very difficult to defend. The Giants found that out the hard way last night. Offensively the Blazers have struck for 15 goals in their past four games and have every reason to feel confident about their game heading into tonight’s rubber match.

Ty Ronning: The Vancouver Giants leading scorer was at it again last night as he potted his 55th of the season. Ronning has now totalled eight goals and two assists for 10 points in six games played against Kamloops, and he’ll look to keep that trend going tonight in the rematch. He’s got 19 goals in his past 19 games.

Tyler Benson: Last night’s game marked the first time in a span of seven games that Giants captain Tyler Benson didn’t register a point. He had good chances to score in all three periods, which should bode well for him tonight the rematch. Benson currently ranks second on the team in both goals (22) and points (60).

Bowen Byram: The rookie of the month for February assisted on the Giants lone goal last night, which moves his season totals to six goals and 18 assists for 24 points. In four games against Kamloops this season, Byram has registered four assists.

Darian Skeoch: The rugged 20-year-old played one of his best games of the season last Monday when the Giants and Blazers last met at the LEC. He was a physical force, blocked a pile of shots and didn’t allow the likes of Jermaine Loewen or Luc Smith easy access to the front of the Giants net. A repeat performance tonight from Skeoch would be a welcomed boost for the Giants.

David Tendeck: It’s hard to fault Tendeck on how last night’s game unfolded. He still made 31 saves on 36 shots faced and would be the odds-on favorite to get the start again here tonight. He’s 23-14-3-2 on the season and he’s 2-2 against Kamloops with a 3.25 goals-against-average and a .898 save percentage.

Pride/Compete: There just simply wasn’t enough of either last night for the Giants. Historically the Giants have responded well after tough losses, and with a large home crowd expected tonight and a playoff berth on the line there’s no reason to suspect that the Giants won’t rise to the occasion and embrace tonight’s rubber match against Kamloops.