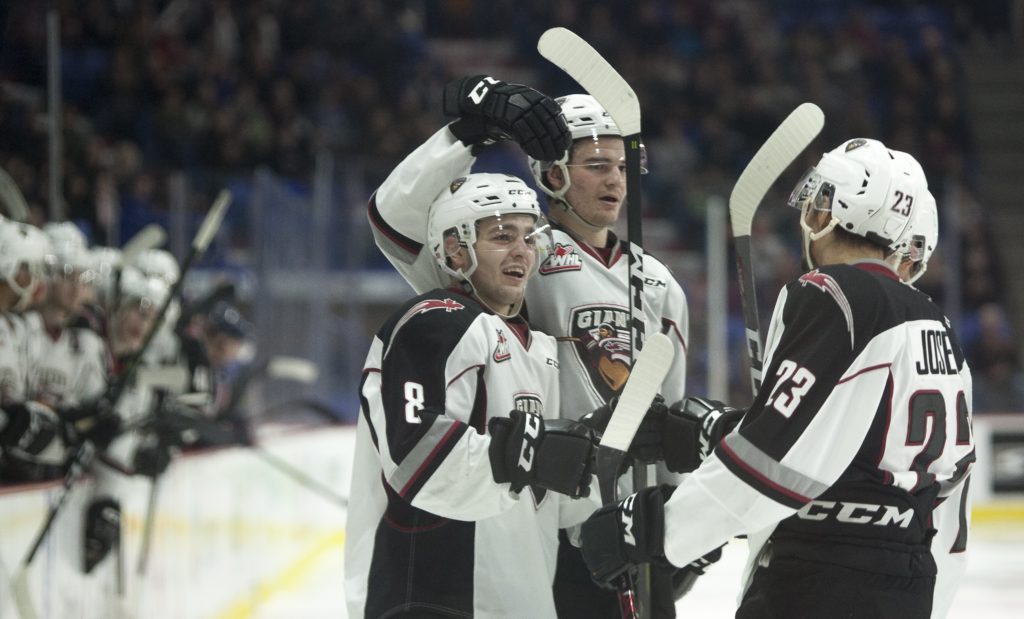 This afternoon at the LEC the Vancouver Giants wrap up a three-game weekend when they take the ice against the Kamloops Blazers for the second of what will ultimately be three straight games. The Giants were 5-4 winners last night on the road and remain two points shy of a share for first place in the Western Conference standings. For Kamloops, it’s officially the 11th hour in their season, and they need to patch a string of victories together to give themselves a chance at a playoff spot. The Blazers are six points out with eight games remaining in their season.

Kamloops Blazers captain Jermaine Loewen did everything he could to try and will his team to victory last night at home. He scored twice, one of which appeared to go in off his face. The Dallas Stars draft pick now has 23 goals on the season and four goals in five appearances against the Giants. Loewen comes into action today with 23 goals and 13 assists for 36 points.

Rookie goaltender Dylan Garand relieved starter Dylan Ferguson last night, and made 11 saves on 12 shots faced after entering the game for the Blazers. Unfortunately for Garand, the one puck that got by him ended up as the game winner. Does Garand’s strong second-half of last night’s game earn him the right to start today’s ‘must-win’ game for Kamloops? Or will the veteran Dylan Ferguson get the nod again for his fourth start in a span of five days?

So far this weekend, 2001-born forward Connor Zary has notched a goal and three assists for four points in two games. For the season,  Zary now has 19 goals and 37 assists for 56 points which places him second in team scoring behind only Zane Franklin. Zary isn’t eligible for the NHL Draft until 2020 which means that his draft stock should only increase over the course of the next year. He’s got one goal and four assists for five points against the G-Men this season.

Milos Roman is enjoying one of the best offensive stretches of his WHL career. The 1999-born Slovak comes into today’s game riding an eight-game point streak. Over the course of those eight games, Roman has struck for five goals and seven assists for 12 points. So far this weekend Roman has five points in two games. On Friday night at home against Kelowna Roman notched a goal and three assists and was named the game’s first star in a 7-4 win over Kelowna. Then last night in Kamloops, Roman scored the game-winning goal in a 5-4 win in Kamloops. Roman currently sits third in team scoring with 25 goals and 52 points. Roman has represented Slovakia in each of the past three World Junior tournaments. He was selected by the Calgary Flames in the fourth round (92nd overall) in the 2018 NHL Draft. Roman has four goals and two assists for six points in six games against Kamloops.

BYRAM CLOSING IN ON CONNAUTON:

With 23 goals now on the season, Bowen Byram is closing in on a Giants goal-scoring record. All Byram needs is one more goal to match Kevin Connauton for the most goals scored by a Giants defenceman in a single season. That season Connauton posted 72 points which also remains a single season record for a Giants defenceman. Byram comes into action today with 23 goals and 40 assists for 63 points. Both of Connauton’s records are within reach for Byram who leads all Giants with four goals and six assists for 10 points against Kamloops this season.