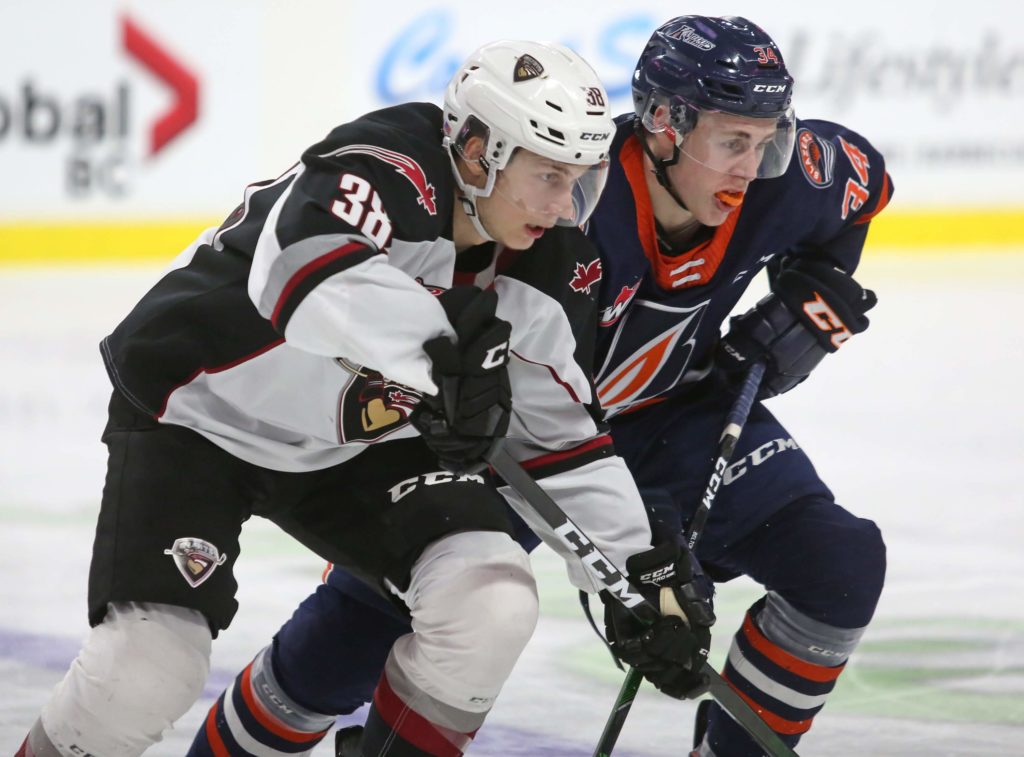 Tonight at the LEC the Vancouver Giants wrap up the month of January with a home showdown with the B.C. Division leading Kamloops Blazers. It marks the first of a home-and-home weekend against Kamloops for the G-Men who enter the weekend four points back of the Kelowna Rockets for third in the division. The Giants are winless in four tries this season against Kamloops and are 0-1 against them at home.

Last Game: A 4-2 victory over the Spokane Chiefs on Wednesday at home.

2001-born forward Connor Zary (Saskatoon, SK) is hoping to hear his name called in the first round of the 2020 NHL Draft. His play this season is giving NHL teams plenty of incentive. Now in his third season with Kamloops, Connor Zary has already secured a new season-high of 28 goals and his 61 points put him just seven shy of his 67 points that he registered last season. In his past seven games, Zary has recorded six goals and eight assists for 14 points. Included in that span was a one goal, two assist effort against Vancouver back on January 19th. Zary earned first star honours that night as the Blazers defeated the Giants 4-0. In four meetings this season against Vancouver, Zary leads all Blazers with eight points (1G, 7A).

Kamloops Blazers goaltender Dylan Garand is 4-0 so far this season against Vancouver. The draft eligible netminder has posted two shutouts and has only surrendered three goals against the Giants in four opportunities. For the season, Garand is 26-9-1-1 with four shutouts, a 2.16 goals-against average and a .924 save percentage. He was the seventh ranked goaltender on NHL Central Scouting’s mid-term rankings list.

2000-born forward Michal Kvasnica played a huge role in the Vancouver Giants 3-1 victory last Sunday in Kelowna. In the first period on a power play, Kvasnica parked himself in the right-wing circle and one-timed an Eric Florchuk pass home. Then in the third period, Kvasnica increased the Giants lead to 2-0 with a shot from the high slot, giving him his first career multi-goal game in the WHL. Kvasnica has posted two goals and three assists for five points over the course of his past six games, and for the season has recorded three goals and six assists for nine points.
NIELSEN RETURNS:
Tonight the G-Men get a big boost with the return of leading scorer Tristen Nielsen. Nielsen missed Sunday’s game in Kelowna due to a one-game suspension. For the season, Nielsen has notched 20 goals along with 21 assists for 41 points. He’s already established new season highs for both goals and points. He’s the only Giant to record more than a single point this season against Kamloops.
VANCOUVER NOTES:
Related Links
GET TICKETS FOR TONIGHT LISTEN TO TONIGHT'S GAME ON SPORTSNET 650 WATCH TONIGHT'S GAME ON WHL LIVE
More News