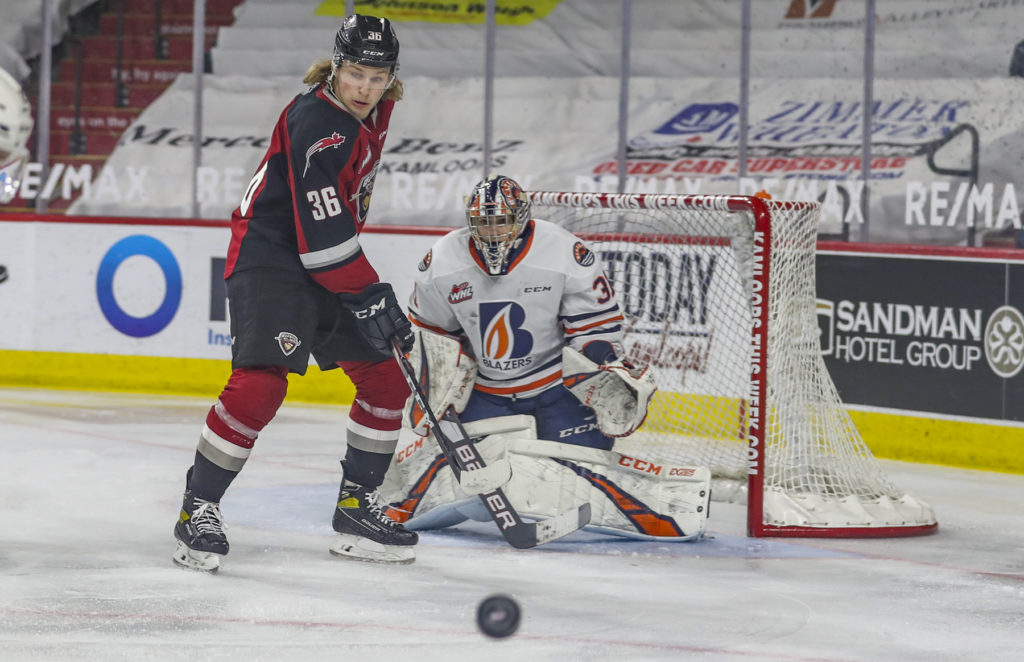 A busy stretch of hockey continues tonight for the Vancouver Giants who are right back at it at 6 PM. Tonight, for a fourth time this season they’ll clash with the B.C. Division leading Kamloops Blazers. Last night in Kelowna, the G-Men dropped a hard-fought 4-3 decision to the Kelowna Rockets, marking their first loss in a span of five games. The Blazers meanwhile are winners of three straight, and their only two losses on the season have come courtesy of the Vancouver Giants.

Last Game: A 3-2 victory at home against Victoria on Friday night.

Blazers captain Connor Zary comes into the game tonight with a team-high 21 points. His 16 assists are tied with Justin Sourdif for the lead in the B.C. Division. In his last seven games, Zary has managed three goals and 11 assists for 14 points. He’s got points in each of his past three games, and goals in each of his past two. Through 12 games, Connor Zary has secured points in all but two games – Both of which have come against Vancouver.

MONEY IN THE ‘BANK’ IER

Given Logan Stankoven’s departure for the World Under-18’s and Orrin Centazzo’s injury, there has been ample opportunity up front to step up and be counted, and 2003-born forward Caedan Bankier has delivered. The Surrey, B.C. product comes into tonight’s game with five goals and nine assists for 14 points in 12 games. During his current three-game point streak, Bankier has a goal and four assists for five points. Last season as a rookie, Bankier managed seven goals and 13 assists for 20 points.

Last Game: A 4-3 loss last night to Kelowna on the road.

THE STREAK CONTINUES FOR SOURDIF

Thanks to a two-goal effort last night, Justin Sourdif’s point streak is now at nine-straight games for the Vancouver Giants. The 2002-born prospect of the Florida Panthers has posted seven goals and nine assists for 16 points in that nine-game span. During the streak, Sourdif has managed five multi-point games. In three games against Kamloops, Sourdif has notched one goal and two assists for three points.

Trent Miner will get his second start in as many days tonight, and his third straight start altogether against Kamloops. So far this season, Miner is 2-0 against Kamloops and has not allowed a goal against in either appearance. For the season, Trent Miner is 6-3 for Vancouver with four shutouts, a 1.51 goals-against average and a .938 save percentage. Miner is tied for the league lead in shutouts (4), and ranks second in goals-against average and third in save percentage.